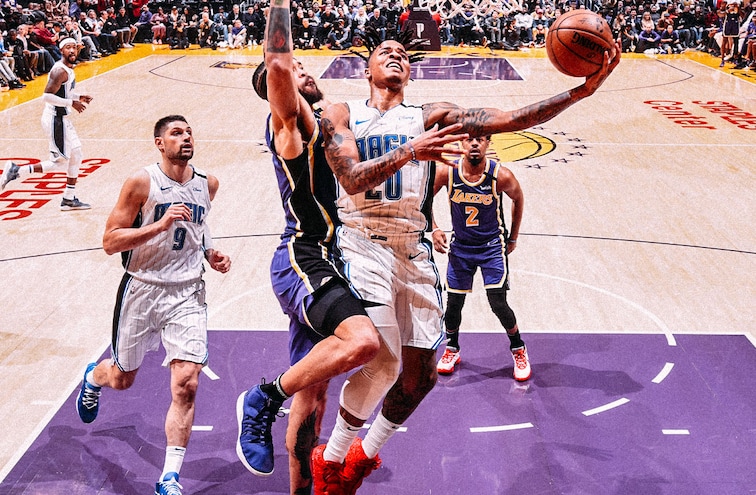 Ask Markelle Fultz about being given up on, but coming back from the dead and beating the Los Angeles Lakers at home and outscoring the great LeBron James.

On a night that featured 10 games, redemption was in order for Markelle Fultz, as he led the Orlando Magic in a takedown of the Los Angeles Lakers in L.A.

Domantas Sabonis took advantage of Karl-Anthony Towns’ absence and can do it again tomorrow night, and Luka Doncic and Russell Westbrook continue their triple double antics.

And, wait a minute, the Bulls are winning?

The Detroit Pistons hit the NOS in the third quarter, screaming past the Boston Celtics on the parquet with a 34-23 third quarter and a 15-point second half advantage to steal a win in Beantown last night. Sekou Doumbouya, the No. 15 pick who has polished his skills through stints on Poitiers and Limoges BSP in Europe, as well as the G League’s Grand Rapids Drive here in the states, has worked his way into head coach Dwane Casey’s rotation, stepped up to lead the Pistons with a season high 24 points as the Pistons snapped a three game skid.

NEXT GAMES
Celtics at Bucks – Tonight
Pistons at Hawks – Saturday

Six of 23 shooting in the fourth quarter didn’t help the Brooklyn Nets last night in the City of Brotherly Love, as they came up dry with only 16 points to Philadelphia’s 31, as the Sixers pulled away for win No. 26 last night. A couple of former Tennessee Volunteers led the Sixers, #VFL Tobias Harris with 34 and 10, while #VFL Josh Richardson added 15 points, five rebounds and three blocks. Kyrie Irving only scored 14 points in 37 minutes of play, shooting a meager 28.6 percent.

NEXT GAMES
Bulls at Sixers – Friday
Bucks at Nets – Saturday

The Miami Heat are now 18-1 at American Airlines Arena after coming back in the fourth quarter last night to put away the visiting San Antonio Spurs. The Heat put together a 31-23 fourth quarter performance to take the win after being down two after three. Rookie Kendrick Nunn was spectacular with a game high 33 points against veterans like DeMar DeRozan and LaMarcus Aldridge. Nunn shot 72.2 percent overall and five of seven from downtown. Jimmy Butler added 12 points in the win.

NEXT GAMES
Heat at Thunder – Friday
Hawks at Spurs – Friday

If the Chicago Bulls don’t knock it off, they might just mess around and end up in the Eastern Conference playoff picture by season’s end. After putting together a 60-46 second half performance last night against the Washington Wizards, the Bulls are within four games of the eighth seed in the East, though the Wizards are within a game of Chicago themselves. It’s nice to finally see some contribution from Thaddeus Young, who should have been bringing a presence all along.

NEXT GAMES
Bulls at Sixers – Friday
Wizards at Raptors – Friday

A 50-40 second half pushed the Indiana Pacers ahead of the Minnesota Timberwolves, who’ve started the second half of the season flailing without Karl-Anthony Towns. Without Towns, Indiana took advantage in the paint, scoring 30 points in the paint in the first half behind Domantas Sabonis, who led all scorers with 29 points in the game. It was Towns’ 15th straight game missed with a knee sprain. It was also Sabonis’ fifth career 25 and 10 game. These two teams go at it again in Indianapolis on Friday night.

NEXT GAME
Timberwolves at Pacers – Friday

A 73 point first half was all the Toronto Raptors needed last night in Oklahoma City. Pascal Siakam looks like he is getting comfortable again after returning from injury as he and O.G. Anunoby combined for 42 points at 21 apiece. The Raptors’ top three failed to outscore the Oklahoma City Thunder’s top three (OKC 69, TOR 65), but the Raptors having seven players in deep double digits is what pushed the visitors past the Thunder.

NEXT GAMES
Wizards at Raptors – Friday
Heat at Thunder – Friday

The Denver Nuggets reclaimed their No. 2 spot in the Western Conference last night, scooting past the idle Utah Jazz with a 14 point win over the visiting Charlotte Hornets. And they did it without players like Nikola Jokic (12, eight, eight) or Jamal Murray (five points, injured)  leading the way. Trying to work Michael Porter, Jr. into the rotation and into a role as a leading man hasn’t been easy, but Porter had a solid 19 and eight last night to lead the Nuggets to the win. P.J. Dozier also had 12 points in 13 minutes, spelling Murray, who rolled his ankle earlier in the game.

NEXT GAMES
Nuggets at Warriors – Tonight
Magic at Hornets – Monday

Are the Portland Trailblazers finally for real? Or are the Houston Rockets simply being exposed? A 60-47 first half provided the buffer the Blazers needed to pull off what was thought to be an improbable win in Houston last night. Both questions are difficult to put a finger on, as James Harden had an off night, shooting 25 percent for a 13-8-7 evening while Russell Westbrook led the team with yet another triple double. Portland is over halfway through the season at 42 games played and going for only 36 wins won’t cut it with all the talent they have on their payroll. It can’t be on Damian Lillard’s shoulders all the time. Carmelo Anthony finished with 18 and 12, and while the Blazers caused the Rockets to lose two straight for the first time since late November, they still need to work on their chemistry to replicate games like last night’s.

NEXT GAMES
Blazers at Mavericks – Friday
Lakers at Rockets – Saturday

Despite a 30-19 fourth quarter and a combined 77 points from De’Aaron Fox, Buddy Hield, and Harrison Barnes, the Sacramento Kings still came up short against Luka Doncic and the Dallas Mavericks at Golden 1 Center last night. The Mavericks got solid performances from their starting five, led by Doncic’s more than impressive triple double, and another combined 38 points off the bench, led by Seth Curry’s 21 points.

NEXT GAMES
Blazers at Mavericks – Friday
Kings at Jazz – Saturday

Sometimes the magic of magic is simply doing the unimaginable right before people’s very eyes. That’s what happened last night in L.A. as the Orlando Magic pulled some sleight of hand and stole a win at the expense of the Los Angeles Lakers. The greatest part of the night was that it was a guy who Philadelphia gave up on who came through for the Magic – Markelle Fultz, who may feel like redemption came full circle last night. Fults has overcome adversity to get his name back in the rotation and spotlight, especially last night, after hitting two critical layups late in the game and even outscoring the great LeBron James to give Orlando the win and a move up to seventh in the Eastern Conference standings.

NEXT GAMES
Magic at Clippers – Tonight
Lakers at Rockets – Saturday