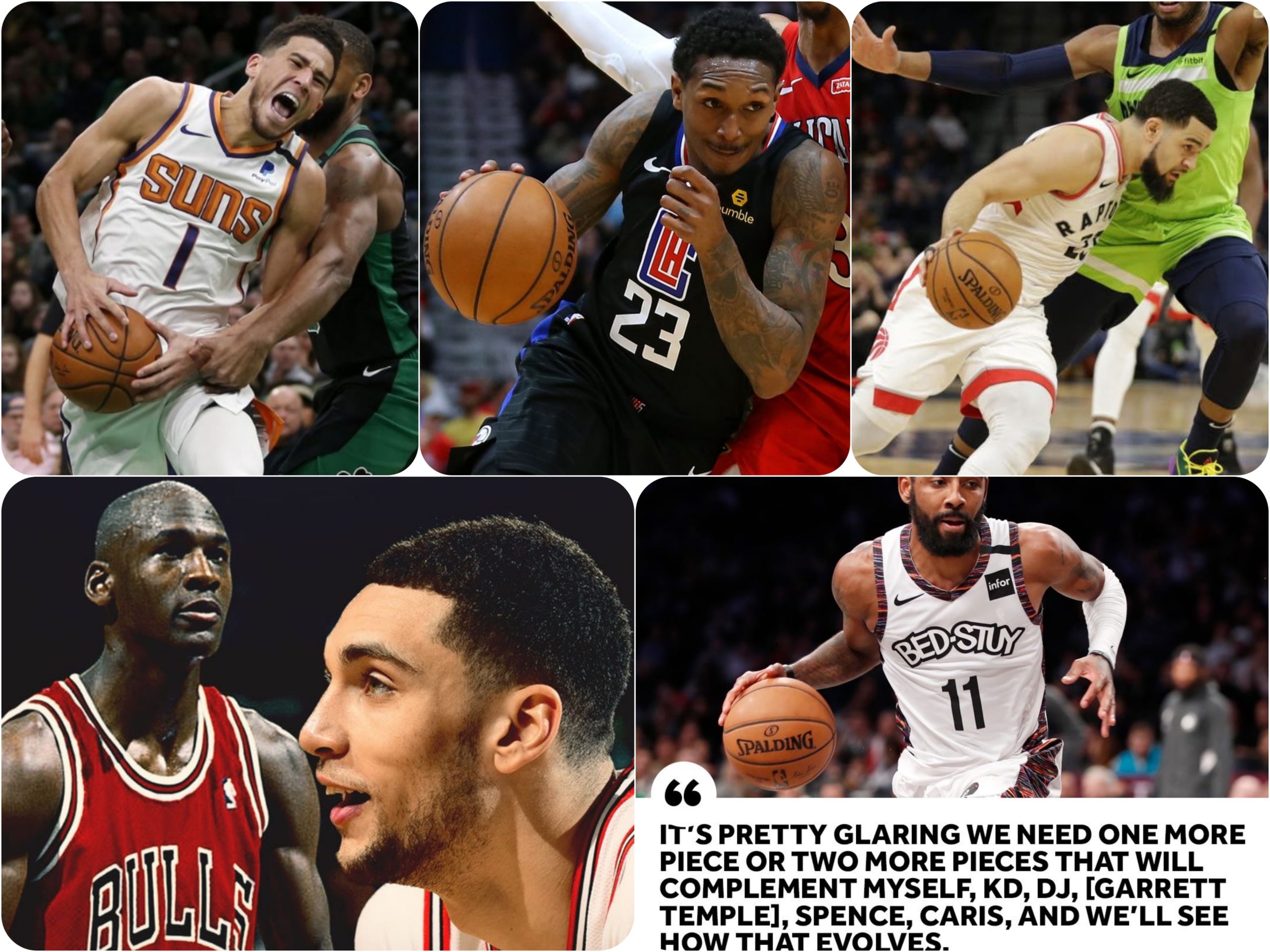 Devin Booker send the Celtics to their third straight loss, Lou Williams is the most under appreciated guy in the game, Fred VanVleet is all about grit, Zach LaVine joins Michael Jordan, and Kyrie Irving is begging for help.

Obviously, it remains to be seen as even the principals in the trade were still on their respective original rosters through last night’s Sacramento Kings-Utah Jazz and Portland Trailblazers-Oklahoma City Thunder games.

From Portland to Sacramento:

From Sacramento to Portland:

All principals involved are posting numbers under their career averages. A couple of players – Tolliver and Swanigan – are returning to their former teams. But the kicker in this swap may be Ariza, who if he can resurrect his deft shooting touch, could open things up for Damian Lillard and Carmelo Anthony.

Ariza’s best years lie in his past, but something tells me that a fresh start in Portland may bring about the guy we saw in New Orleans and Houston. At least, that’s Portland’s hope.

There also may be pieces in there for salary reasons or otherwise that may end up landing Kevin Love in his hometown. Of course, that’s selfish, wishful thinking on both my and Love’s part. Swanigan returns to the Rose City after being traded for Skal Labissiere, which has arguably been a bust of a move.

Bazemore can hopefully become more the contributor he was in Atlanta for four years, the best of his career.

Who got the best of this trade?

It’s nice that the NBA has an award for off the bench contribution every season, called the NBA Sixth Man Award. And Lou Williams has a few of them. But there should be a bigger, more gratifying award for Williams, as he has been instrumental in keeping the Los Angeles Clippers afloat when stars have been in and out, traded, etc. Last night, he was Kawhi Leonard’s wingman in the fourth quarter, when Williams scored 14 of his 32 and the Clippers outscored the New Orleans Pelicans, 31-20, to come back and nail down their 30th win of the season.

NEXT GAMES
Pelicans at Grizzlies – Monday
Clippers at Mavericks – Tuesday

Kyrie Irving said he needs help, but it doesn’t speak much to his leadership when he only musters 17 points on 40 percent shooting to ‘lead’ his team. Meanwhile, if he wants to know what leadership looks like, he only needs to watch game tape of the Milwaukee Bucks soundly defeating his Brooklyn Nets by 20 points last night. Not only does Giannis Antetokuonmpo lead with his play on the floor, but the team follows that grit and determination when he’s out of the lineup as well. It’s why he is the reigning MVP. The Bucks’ supporting cast was just as anonymous a few years back as Irving’s is today. It’s what you do with it that makes you a champion.

NEXT GAMES
Sixers at Nets – Monday
Bulls at Bucks – Monday

The Boston Celtics suffered their first three game losing streak of the season a week before last. That included losses to Washington, San Antonio, and Philadelphia. There was a ripple of panic amongst Celtics fans, but Boston bounced back and beat non-playoff contenders like New Orleans and Chicago. With last night’s loss to the Phoenix Suns, they’ve now suffered their second three game losing streak in two weeks’ time. They lost to Detroit and Milwaukee earlier this week, with the Los Angeles Lakers visiting tomorrow evening. On national TV no less. Boston had a 43-36 fourth quarter, but it was too little too late as the Suns outscored Boston in quarters one, two, and three.

NEXT GAMES
Lakers at Celtics – Monday
Spurs at Suns – Monday

It’s almost as if the Atlanta Hawks are okay being average, being the second worst team in the league. As if they’re waiting on a chance to draft James Wiseman, LaMelo Ball, or keep Anthony Edwards in the State of Georgia after these young men declare themselves eligible for the NBA Draft. Meanwhile, the Pistons are in sniffing distance of the eighth seed in the Eastern Conference, just three games behind the flailing Brooklyn Nets. About the only bright takeaway from last night’s game was the reintegration of Jeff Teague to the Atlanta roster. He finished with 15 points, three rebounds, seven assists, a steal and a block in his first game back in an Atlanta uniform.

NEXT GAMES
Pistons at Wizards – Monday
Raptors at Hawks – Monday

There are those out there that are perpetrating trade scenarios for Philadelphia’s Ben Simmons, with no basis or foundation that he is not an asset to the 76ers. One only has to look at last night’s game as an example that Simmons can lead the Sixers, and lead them to victory. One can also easily note that his averages through 42 games – that means he’s played every game this season – he’s averaging 15.5 points, 7.7 rebounds, and 8.4 assists per game. Though the points are .7 down from his career average and his rebounds are .6 lower, his assists are .4 up and his 42 games are about one fifth of the amount of games he’s played overall since coming into the NBA. He’s not only becoming a better leader, but he’s feeding his team, that has had a half a dozen people come and go since he’s been here. Keep on, Ben Simmons. There are many more that believe in you than don’t.

NEXT GAMES
Sixers at Nets – Monday
Knicks at Cavaliers – Monday

Fifteen points down at the beginning of the fourth quarter. It’s a familiar position for the Chicago Bulls. Not just this season. Not just last. But for a few years now. What’s not familiar is pulling out a 31-14 fourth quarter to put the opponent down and come away with the win. But this was the friendly confines of the United Center last night and that opponent was the Cleveland Cavaliers, who’ve never seemingly been able to do anything without LeBron James since 2003. Kevin Love led the Cavs, but Zach LaVine was on a different level than anyone else in the building in scoring his 42 points, half of those in the decisive fourth quarter for the Bulls. LaVine is the first Bull since Michael Jordan to have 40 points and five steals.

NEXT GAMES
Knicks at Cavaliers – Monday
Bulls at Bucks – Monday

In a game that saw some scratching and clawing in the scoring runs, the team with the more lethal talons came away with the win, with some unlikely heroes for both teams leading the way for their respective squads. Instead of a Pascal Siakam / Karl-Anthony Towns battle, fans were treated to Fred VanVleet’s leadership and grit for the Toronto Raptors, as well as the emergence of rookie Jarrett Culver for the Minnesota Timberwolves last night. Towns, Siakam, Marc Gasol, and Andrew Wiggins all took a back seat to what was a competitive game between the younger generation players.

NEXT GAMES
Raptors at Hawks – Monday
Nuggets at Timberwolves – Monday

It’s as if the Orlando Magic are satisfied with going on a six game road trip and coming away beating the Los Angeles Lakers was satisfying enough for the entire 12 days away from the Amway Center. Okay they beat the Sacramento Kings, too, but they lost to the Suns (by 4) and Clippers (by 27) on this trip, and just handed the worst team in the league its 10th win of the season, losing to the Golden State Warriors by 14 points. After they return to Orlando, they face the Thunder, Celtics, and Clippers this week. They’re 43 games into the season – when are they going to turn the corner? If they lose to Charlotte tomorrow night, it’s time to openly ask some questions about the current makeup of the Orlando Magic.

NEXT GAMES
Magic at Hornets – Monday
Warriors at Blazers – Monday

With Anthony Davis still resting the back issue, the Houston Rockets had a huge opportunity to exploit the paint, JaVale McGee, and former Rocket Dwight Howard. They failed. Instead, Clint Capela finished eight, 12, and three … and Isaiah Hartenstein did not play at all. Shame on you, Mike D’Antoni. As a result, your Rockets suffered their third straight loss and it is decision like these that may haunt you as you lame duck your way through the remainder of this season and likely lose out on a contract extension. Meanwhile, Frank Vogel looks like a genius, though Jason Kidd and Lionel Hollins are on the bench as insurance. Personally, I’d like to see Hollins in Houston next season to guide this guard heavy team to its potential. The bright spot is that Russell Westbrook is the first Rocket besides James Harden to score 30 points in four straight games since Tracy McGrady did it in six games in a row in the 2006-07 season.

NEXT GAMES
Lakers at Celtics – Monday
Thunder at Rockets – Monday

Carmelo Anthony may have crossed the 26,000 point career threshold on Friday night, but he only scored nine points on 30.8 percent shooting in a return to Oklahoma City last night, and the Blazers fell to the Thunder by 13 as a result. He’s not the only one. C.J. McCollum did not play and fellow Blazers Kent Bazemore and Anthony Tolliver were a scratch as they were sent to the Sacramento Kings for Trevor Ariza, Wenyen Gabriel, and Caleb Swanigan. The Thunder took advantage, jumping on the Blazers by eight in the first quarter, and then another six point margin in the second half to post the win, Nerlens Noel got involved off the bench for Oklahoma City, which has had most of its success dictated by the play of its three guards.

NEXT GAMES
Thunder at Rockets – Monday
Warriors at Blazers – Monday

The 22 point win that the Utah Jazz posted over the visiting Sacramento Kings last night in Salt Lake City was pretty much decided in the 38-22 first quarter Utah margin, the Jazz setting the tempo from the outset. If that wasn’t enough, the Jazz added a 32-28 third quarter for insurance, and went on to their 29th win of the season. Their top three combined for 80 points, and Rudy Gobert set the bar high defensively, grabbing a couple of steals and swatting three shots to go along with his 28 and 15 night. You know it’s a good night and a great team when your leading scorer for the season can score a mere 22, be the third leading scorer in the game, and your team wins by 22 points.

NEXT GAMES
Pacers at Jazz – Monday
Kings at Heat – Monday

Rundown v01.18.20 – Grizz Have NBA’s Longest Win Streak, Raptors Prey on Wiz, and Should There Be a Blazers-Rockets Swap?
Rundown v01.20.20 – Nuggets Run into Sabonis, Heat Cool Off in San Antonio