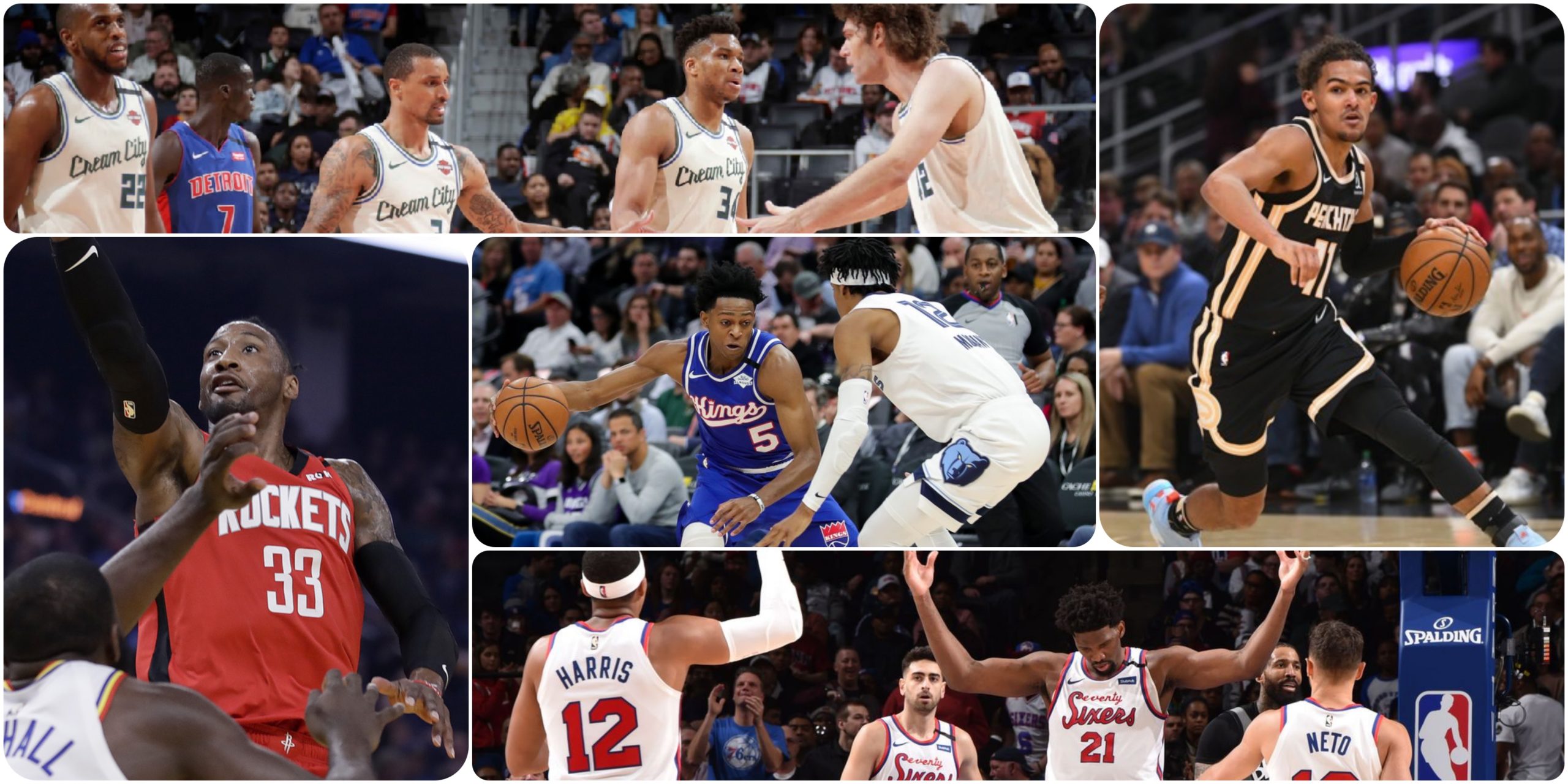 Last night, Trae Young dropped 50 on the Heat in an Atlanta win, the Bucks and Rockets had easy wins, while the Kings beat Memphis, and Joel Embiid and #VFL Tobias Harris went next level on the Nets, winning in overtime.

A lot of bodies have moved in and out of (and will move in and out of) the NBA’s clubhouses this past week, and going forward, as buyouts, injuries, 10-day contracts, and season-ending surgeries claim people off of and add to teams’ rosters.

The Milwaukee Bucks jumped out to a 23-9 lead in the first quarter that ended up a 32-18 advantage, which resulted in a 70-41 first half. Enough to withstand a 65-56 run by the Detroit Pistons in the second half with 20 points to spare. Milwaukee, in fact, led by as many as 34 in the second half. The Pistons have lost five consecutive games since trading away Andre Drummond to the Cleveland Cavaliers. Reggie Jackson also left over the All Star Break, buying out his contract and signing with the Los Angeles Clippers. The roster vacancies have afforded Christian Wood the opportunity he has long sought and was starting to get with the New Orleans Pelicans last year. Wood led the Pistons as top scorer, with 18 and 11, but was bested by the Bucks’ top three scorers in Giannis Antetokuonmpo, Khris Middleton, and Eric Bledsoe.

NEXT GAMES
Philadelphia at Milwaukee – Saturday
Detroit at Portland – Sunday

Bouyed by his Skills Challenge win and a solid weekend at NBA All Star, Bam Adebayo seemed poised to go into Atlanta and steal an easy win for the Miami Heat. But a 39-27 fourth quarter surge in front of the home crowd at State Farm Arena last night helped the Hawks soar past the Heat for a confidence building win instead. Trae Young dropped 50 on the fourth place Heat, De’Andre Hunter and Kevin Huerter combined for another 34, Cam Reddish added 16, and it was a dozen each from John Collins and Jeff Teague as Atlanta held serve in front of 17,356 faithful.

NEXT GAMES
Dallas at Atlanta – Saturday
Cleveland at Miami – Saturday

Charlotte swarmed the Chicago Bulls from Jump Street with a 33-20 first quarter and then held on to notch a 10 point win over the hapless Bulls. The win helped the Hornets move a half game ahead of Chicago, knocking the Bulls down to 11th place in the Eastern Conference. Malik Monk led Charlotte with 25 points, while Miles Bridges continued his success from the Rising Stars game, in which he outshined everyone from Zion Williamson to Luka Doncic, to drop 22 and eight last night. Thaddeus Young stepped it up for the Bulls, who looked about as uncomfortable as Zach LaVine did answering Charles Barkley’s questions about the state of the Bulls and Lauri Markkanen over All Star.

NEXT GAMES
Brooklyn at Charlotte – Saturday
Phoenix at Chicago – Saturday

The Brooklyn Nets are faced with having to go without Kyrie Irving for the remainder of the season, as he is facing shoulder surgery, while the Nets have to evolve once again with role players stepping up. Last night, they could have used a little of Uncle Drew’s magic in the overtime period, where they mustered only one point and fell to the Philadelphia 76ers’ nine. One of the newest 76ers on the team, Alec Burks showed his worth in the overtime period, hitting two critical layups in the extra period to help Philadelphia to the win. With Jarrett ‘Goose Egg’ Allen in the middle, Joel Embiid dominated the paint, leading all scorers with 39 and 16, while the Sixers got to the free throw line 35 times (91 percent) to Brooklyn’s 28 (78 percent).

NEXT GAMES
Brooklyn at Charlotte – Saturday
Philadelphia at Milwaukee – Saturday

In a hard fought battle to gain traction in the Western Conference playoff race, the Sacramento Kings edged out the surging Memphis Grizzlies at home last night, led by Harrison Barnes, De’Aaron Fox, and new Three Point champion Buddy Hield, who only hit two of six from downtown versus his 26 three pointers last Saturday night in Chicago. Last night, it was Barnes’ seven three pointers and 32 points that carried the Kings to their 22nd win. Hield made his presence felt at the free throw line, hitting a perfect eight of eight. De’Anthony Melton led the way for Memphis, which fell to its 27th loss of the season through 55 games.

The Houston Rockets lifted off to a 16-4 boost, and an eventual 38-17 lead, in the first quarter in San Francisco last night, and continued to build throughout the game against the league’s worst team to record a 30 point win over the Golden State Warriors. Two former Minnesota Timberwolves on two different trajectories reunited last night with Andrew Wiggins leading the Warriors with 22 points in a loss, while Robert Covington was part of a three-way 70 point drop, contributing 20 points in a Houston win, its 35th of the season through 55 games. It was Golden State’s fifth consecutive loss and fifth loss in a row in the Chase Center, where they’d beaten the Rockets on Christmas Day.