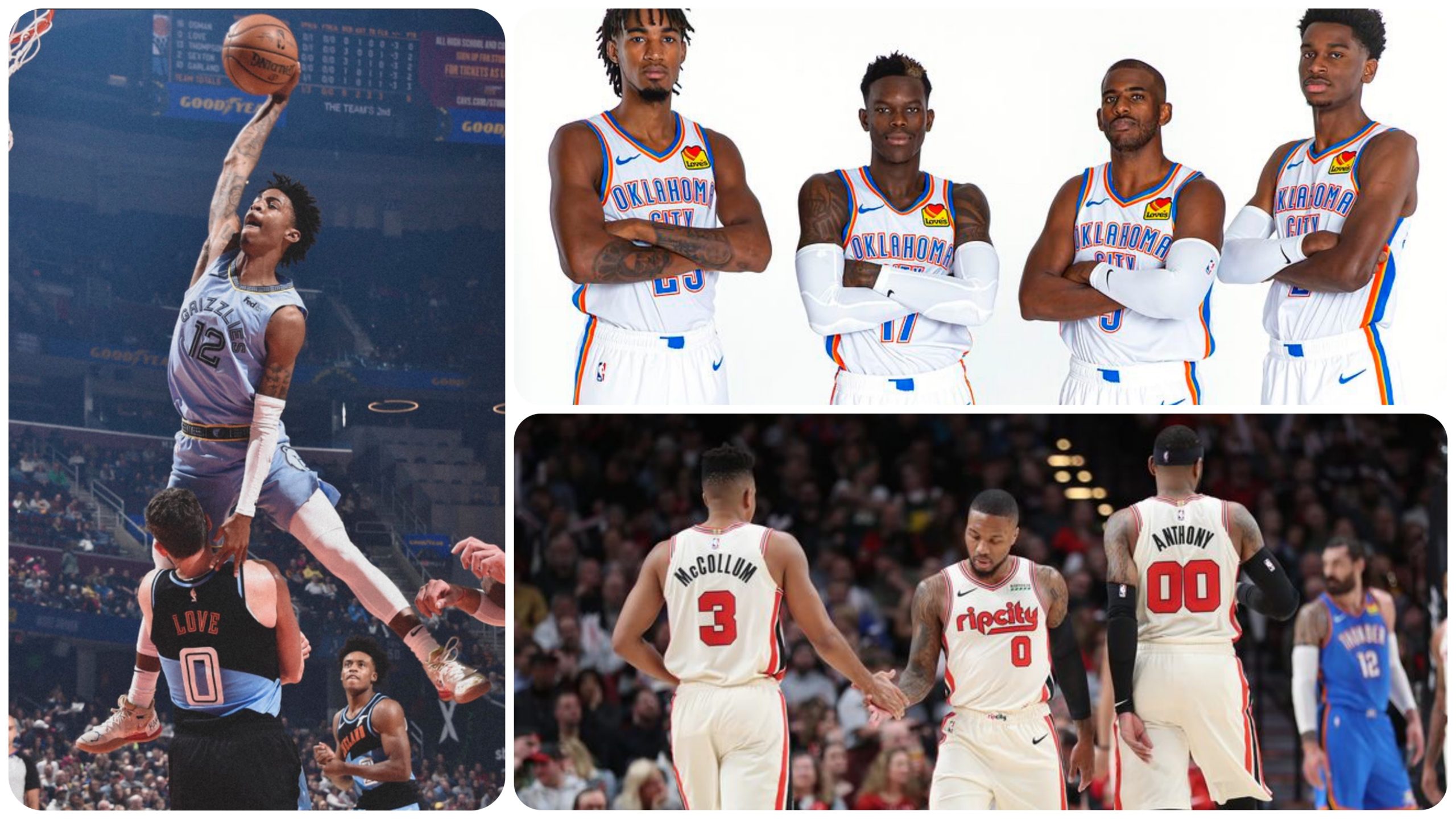 Guess who's back in the Western Conference picture? And Kevin Love says Ja Morant saved his life, after nearly taking it.

The ONLY change that should be made … is re-seeding the playoffs so that the 16 best records compete for the NBA championship.

Do you truly think that an in season tournament will yield anything?

If you think load management is bad now, teams will hold their marquee players out.

Then, the format that was adopted from the G League will – in effect – become about as paid attention to and attended – as a G League Showcase game.

Just change the playoffs to the 16 best records.

Playoffs would look like this if we adopted this format today (based on the current standings):

Nothing but potential trade bait auditions for the Cleveland Cavaliers as they defeat the Memphis Grizzlies.

NEXT GAMES
Kings at Grizzlies – Monday
Hawks at Cavaliers – Monday

The Indiana Pacers win their fifth in a row over the Sacramento Kings.

NEXT GAMES
Kings at Grizzlies – Saturday
Pacers at Bucks – Sunday

When you have six players in double digits, your center has no blocked shots, and nearly no one can complete the first three columns in that stat sheet, it’s should be no surprise you’re going to get beat by two young guns with the same stat line(s) and a hungry kid from the University of Tennessee.

NEXT GAMES
Bulls at Piston – Saturday
Hornets at Celtics – Sunday

Despite being without Pascal Siakam, Norman Powell, and Marc Gasol, the Toronto Raptors welcomed Fred VanVleet back into the starting lineup after a five game absence, and keep finding ways to win as they downed the Washington Wizards on Friday night.

NEXT GAMES
Wizards at Sixers – Saturday
Mavericks at Toronto – Sunday

NEXT GAMES
Bucks at Knicks – Saturday
Jazz at Heat – Monday

Kristaps Porzingis continues to improve without Luka Doncic in the lineup, and what a dangerous combo this will be come playoffs as the Dallas Mavericks take down the Philadelphia 76ers on the road.

NEXT GAMES
Wizards at Sixers – Saturday
Mavericks at Raptors – Sunday

Shai Gilgeous-Alexander drops a career high 32 points as the Oklahoma City Thunder continue to defy the oddsmakers and hit the .500 mark for the season one third of the way through. Meanwhile, the Phoenix Suns continue to set … well below the .500 mark.

NEXT GAMES
Rockets at Suns – Saturday
Clippers at Thunder – Sunday

The Denver Nuggets continue their climb into the top of the Rocky Mountain high expectations of the Western Conference by silencing the Minnesota Timberwolves – sans Karl-Anthony Towns – on Friday night to prepare themselves to face the Los Angeles Lakers in L.A. on Sunday night.

NEXT GAMES
Timberwolves at Trailblazers – Saturday
Nuggets at Lakers – Sunday

The Portland Trailblazers treated their fans to a 31-13 opening quarter to set the night on cruise control against the visiting Orlando Magic Friday night to easily cross the finish line.

NEXT GAMES
Timberwolves at Trailblazers – Saturday
Bulls at Magic – Monday

D’Angelo Russell lead the Golden State Warriors to their sixth win of the season on Friday night against a New Orleans Pelicans team that is aching to have Zion Williamson in the lineup, but smart enough to take their time with him.

NEXT GAMES
Pelicans at Trailblazers – Monday
Timberwolves at Warriors – Monday

Bojan Bogdanovic continues to prove to be the best off-season acquisition for the Utah Jazz as he and Donovan Mitchell lead the Jazz past the Charlotte Hornets on the road on Saturday night.

NEXT GAMES
Jazz at Heat – Sunday
Hornets at Celtics – Sunday

The Atlanta Hawks’ freefall continued Saturday night against a team that’s in a freefall of its own. One playing with its star and the other playing without its big name off season signee, but a star is being born in Spencer Dinwiddie. The Hawks are making the Golden State Warriors’ record look good.

NEXT GAMES
Hawks at Cavaliers – Monday
Knicks at Nets – Thursday

The Chicago Bulls used a 66-48 second half to choke out the Detroit Pistons Saturday night.

NEXT GAMES
Bulls at Magic – Monday
Sixers at Pistons – Monday

The Philadelphia 76ers stopped their three game losing streak with a resounding win over the Washington Wizards that features Washington’s Isaiah Thomas heading into the stands to confront heckling fans. (More details forthcoming on that situation).

NEXT GAMES
Wizards at Knicks – Monday
Sixers at Pistons – Monday

The Milwaukee Bucks continued their dominance of the NBA at the expense of the New York Knicks. How dominant? Even Thanasis Antetokuonmpo got in on the action – and was the highlight of the night.

NEXT GAMES
Pacers at Bucks – Sunday
Wizards at Knicks – Monday

Despite a 37-28 fourth quarter attempted comeback, the Sacramento Kings didn’t have enough ammunition to take down the Memphis Grizzlies Saturday night. Memphis had seven in double figures for the win.

NEXT GAMES
Rockets at Kings – Monday
Spurs at Grizzlies – Monday

It was DunkFest ‘19 in Kawhi Leonard’s return to San Antonio, as the Los Angeles Clippers dunked on the Spurs 20 times to take the easy 25 points win. Paul George shot 36.4 percent for 11 points. It was Leonard’s first win back in San Antonio.

NEXT GAMES
Clippers at Thunder – Sunday
Spurs at Grizzlies – Monday

The Houston Rockets outscored the Phoenix Suns 103-90 in the final three quarters to break away into the next stratosphere and put themselves in third place in the Western Conference. James Harden and Russell Westbrook are looking like an abominable duo in the league after combining for 77 points, 10 rebounds, 17 assists, two steals and two blocks on Saturday night.

NEXT GAMES
Rockets at Kings – Monday
Nuggets at Suns – Monday

If you’re Neil Olshey and you’re thinking of trading Hassan Whiteside, you’re not paying attention to the numbers the kid is putting up. Head case or not, I’ll take the 16 and 23 nights. Or the 16 points, 22 rebounds and seven blocks he had against Minnesota on Saturday night.

NEXT GAMES
Timberwolves at Warriors – Monday
Pelicans at Trailblazers – Monday

A 28 point win should be impressive enough, but the 34-16 insult to injury fourth quarter the Milwaukee Bucks had at home last night versus the Indiana Pacers demonstrates that hunting season has turned the hunted into the hunters. Milwaukee is on a mission. League best. Don’t @ me.

A 32-23 fourth quarter by the Oklahoma City Thunder spoiled Paul George’s return to Oklahoma City. Shai Gilgeous-Alexander – acquired in the summer’s move – matched his career best 32 (set two nights before against Phoenix) to show who got the best of that trade … at least last night. OKC is now a game above .500 and in seventh in the Western Conference.

After a five point deficit in the first quarter, the Denver Nuggets spanked the Los Angeles Lakers, 105-76, over the final three quarters to gain ground on the first place Lakers in the Western Conference, while LeBron James sat (as I predicted last week). No load management, huh LeBron? It was Denver’s sixth consecutive win.

The Toronto Raptors scored 47 points in the fourth quarter to put away the Dallas Mavericks last night in Toronto. Dallas scored 21 in the final period. The 47 was a franchise record.

NEXT GAMES
Raptors at Pacers – Tonight
Spurs at Mavericks – Thursday

The Boston Celtics got their 20th win of the season last night with a 26 point smokeout of the Charlotte Hornets. It was also Charlotte’s 20th loss of the season. Jayson Tatum scored a career high 39 points in the win.