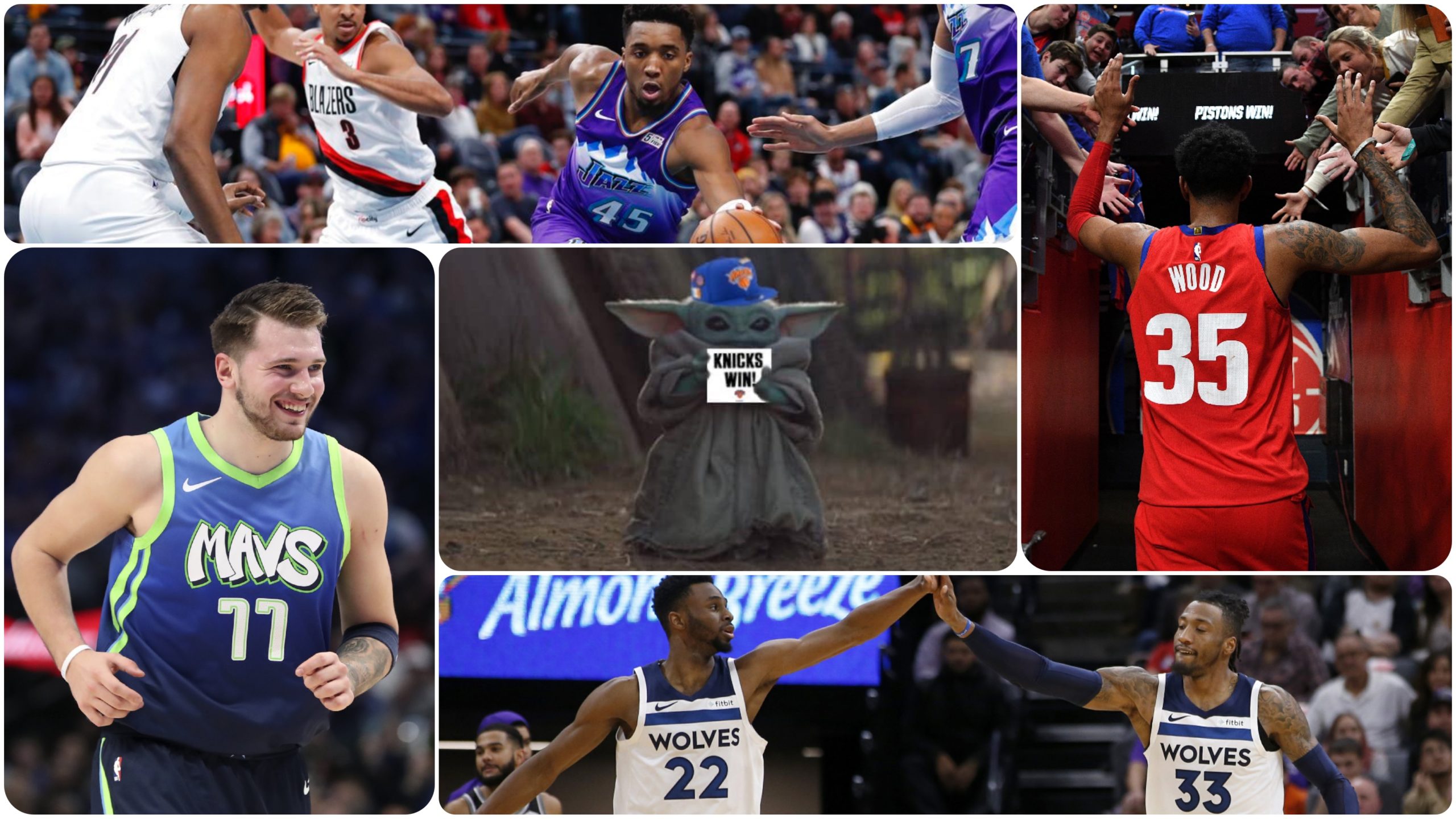 Just six games in the NBA last night as we ease back into the schedule, most of us still with a full belly and just the right amount of NBA action every night the next few nights.

Portland and Oklahoma City have yet to turn the corner, Minnesota ends its 11 game skid, and TNT wisely replaces the Chocolate Pudding Emoji Game of the Night with a tilt between Dallas and San Antonio.

When you look at the starting lineup for the Washington Wizards, you have to wonder if head coach Scott Brooks had his clipboard upside down when prepping for last night’s game against the Detroit Pistons. Brooks started players like #VFL Admiral Schofield, Germany’s Isaac Bonga, Latvian G League player Anzejs Pasecniks, and veteran journeyman Ian Mahinmi alongside Bradley Beal. The results were as you might expect – four starters totalling 16 points, 11 rebounds, two assists, one steal, and one block. Former Washington Wizard Tim Frazier outscored those four, as the Pistons outdid the Wizards in every quarter, cruising to the 30 point win, and squashed their own losing streak.

According to Elias Sports Bureau, the Brooklyn Nets put one up for the books last night. They, now, are the team with the fewest two point field goals in a game since 1950. They made eight two pointers. The result was an NBA season low shooting percentage of 27 percent for the Nets. As you might guess, New York made more, shot better, and won the Battle of the Boroughs behind magnificent play from their glut of power forwards, more specifically, Julius Randle and Marcus Morris, the latter of which might have been the best free agent pick up of the summer between the two teams.

Oklahoma City’s guard corps continues to improve, but the Memphis Grizzlies went big last night and capitalized on the improving play of second year big man Jaren Jackson, Jr., who had a solid all around game last night in Oklahoma City as the Grizzlies won their 12th game of the season. The Thunder beat Memphis on this very floor eight days ago, 126-122, behind 31 points from Dennis Schroder (20 last night) and 20 from Danilo Gallinari. Gallinari didn’t play last night due to a left ankle issue that kept him out of the game against the Clippers and will keep from traveling to the Thunder’s next two games. With Portland’s loss last night, too, the Thunder maintain seventh in the Western Conference standings for now, despite dropping to .500.

NEXT GAMES
Thunder at Hornets – Friday
Grizzlies at Nuggets – Saturday

Luka Doncic returned to the Dallas Mavericks lineup last night, and if you saw the game, you saw the kid just having fun. No pressure. Just smiling and having a blast. Maybe that’s all there is to the secret of Doncic’s success in the NBA. Of course, the Mavericks were playing the San Antonio Spurs, who have struggled with consistency after starting the season 4-0. Though the Spurs scored the game’s final 13 points, the Mavericks were comfortably ahead thanks to Doncic’s reinsertion into the game in the second quarter, which gave the Mavericks a 52-47 lead, and enough of a shot in the arm to carry them to the win.

Andrew Wiggins may have shot a mere 21.1 percent last night in Sacramento, but he hit when it mattered, scoring the first bucket in the second overtime and assisting teammate Robert Covington on another, and the Minnesota Timberwolves escaped Sacramento with a one point, double overtime win that keeps the Sacramento Kings at bay, much as they were last season. The 11 game losing streak is over for the Timberwolves, who looked relieved leaving the court after the elongated affair.

NEXT GAMES
Cavaliers at Timberwolves – Saturday
Suns at Kings – Saturday

Most games between these two Western Conference teams are up and down, wild rollercoaster rides, and last night’s was no different in Salt Lake City. Donovan Mitchell led the Jazz with 28 of his 35 points in a second half that saw the Jazz outdo the Blazers in the third quarter, before Portland answered with a 39-25 fourth. Thanks to Joe Ingles’ performance in the first half, the Jazz already had a nice pad heading into the locker room at halftime, due to a 37-22 opening quarter that they just had to protect throughout the game, and, especially at the end when defensive specialist Rudy Gobert’s hustle plays. The loss means Portland gained no ground on Oklahoma City, nor did they move any closer to surpassing the .500 mark, which has been elusive much of this early season. Jordan Clarkson scored nine points and had one steal in his Jazz debut.