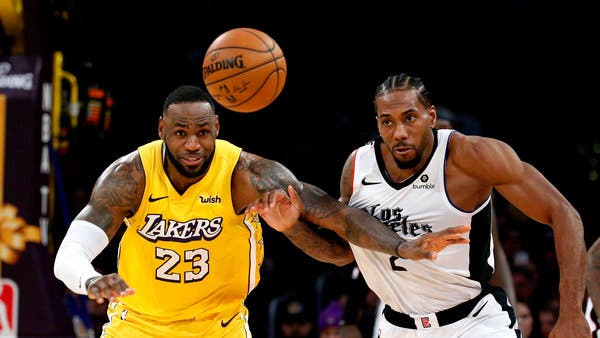 After a four and a half month layoff, it was Battle: LA again for the Lakers and their step brother Clippers, as well as bragging rights for the former New Orleans Jazz and their pet birds from the Gulf.

After all of the microphone touching, paranoia, fear, sicknesses, deaths, political bumbling and chest-puffing on both sides, social unrest, city-burning, looting, child victimization, kneeling, and silence for those who’ve died for their beliefs and causes, it was back to NBA basketball last night … sort of …

Instead of the cheers, boos, applause, and the good ol’ wave, it was the constant squeak of high dollar high tops and audible chatter amongst the athletes in both of last night’s games that was eerily reminiscent of a church ball or YMCA pick up game … with much more talented personnel.

This is ‘the new normal?’

Let’s get this figured out, America. Let’s get well sooner than later. Or professional sports as we know it – as entertainment, as a fandom – may also become a victim of COVID-19.

The NBA wanted the New Orleans Pelicans to be a part of this bubble scenario, with the opportunity to make a playoff push behind No. 1 draft pick Zion Williamson, Brandon Ingram, and Jrue Holiday.

Problem is, there are only eight games to make any such move, and the former team from New Orleans – the Utah Jazz – were the first team in the way. After taking a 60-48 lead to the locker room at HP Field House in Kissimmee, the Pelicans allowed the Jazz back in it with a 57 point second half to New Orleans’ 44 points and the four point loss.

Rudy Gobert, arguably the guy who shut the entire NBA down back in March, did the same to the Pelicans’ hopes with two game icing free throws, before Brandon Ingram missed a three point attempt. The Pelicans embarrassingly had 20 turnovers as well as 20 misses out of 31 attempts from the three-point line to contribute to the loss.

As I mentioned in my Utah piece a couple of weeks ago, the Jazz was fueled by Jordan Clarkson, their mid-season acquisition from the Cleveland Cavaliers. Clarkson led the Jazz with 23, five and three off the bench. Donovan Mitchell and Mike Conley had 20 points apiece, Gobert finished with a solid 14 and 12, while Joe Ingles had 13 points, and Royce O’Neale mopped up with 12 and nine boards.

Ingram led the Pelicans with 23 points, J.J. Redick had 21, and Jrue Holiday finished with 20 on the night, along with five rebounds, four assists, three steals and a blocked shot. Williamson, who had missed time in the bubble dealing with family issues, played 15 minutes and scored 13 points. Josh Hart added 10.

NEXT GAMES
Pelicans vs. Clippers – Saturday
Jazz vs. Thunder – Saturday

At the ESPN Wide World of Sports arena in Reunion, Florida it was a battle for bragging rights on the West Coast – the Los Angeles Lakers and their perennial red-headed step brothers, the Los Angeles Clippers.

Having lost to the Clippers on Opening Night back in October, and again on Christmas Day, the Lakers hoped to use their March 8th nine-point win and the long layoff as a chance to regroup and regain the title as Kings of L.A. basketball. Behind Anthony Davis, they did just that.

The Lakers jumped out to a convincing 35-23 first quarter lead, before allowing the Clippers to come back in the second with a 29-19 response, heading to the break at 54-52, L.A. (Lakers). The Lakers lost nearly every statistical category, except where having A.D. counts the most – rebounds. Except it was that other guy – No. 23, LeBron James – who did the dirty work on the glass, leading the purple and gold with 11 boards. No Clipper even came close to double digits on the glass.

Kawhi Leonard and Paul George combined for 58 points on the night, and Patrick Beverley chipped in a dozen, while Reggie Jackson went 10, six, and four … but it wasn’t enough for Little Brother L.A. and the Load Management Crew. I poke fun, because those load management games cost the Clippers in the win-loss column throughout the season as the Lakers are now 6.5 games up on the second place Clippers.

NEXT GAMES
Clippers vs. Pelicans – Saturday
Lakers vs. Raptors – Saturday