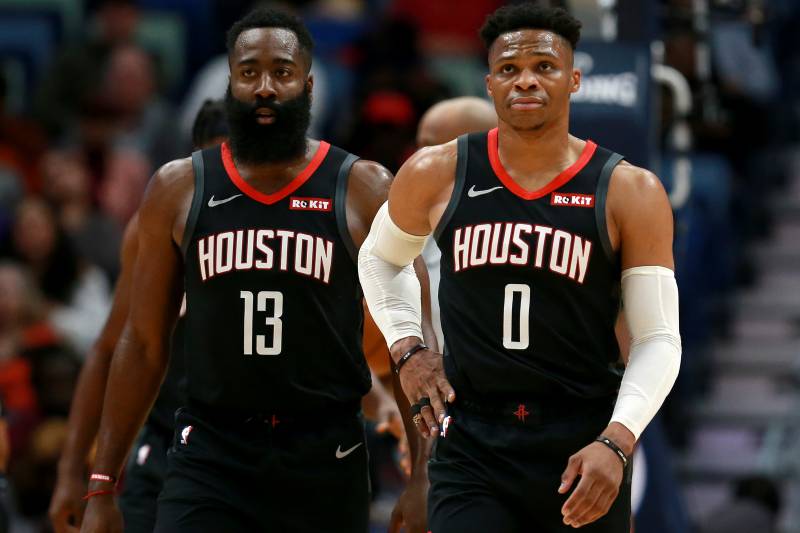 This summer during the NBA offseason, the Oklahoma City Thunder shocked basketball fans around the world by trading star forward Paul George to the Los Angeles Clippers and former MVP guard Russell Westbrook to the Houston Rockets. By trading their best players, the Thunder got a head start in their rebuild by acquiring a boat-load of draft picks (the Clippers’ first round draft picks in 2022, 2024 and 2026, two first-round choices in 2021 and 2025 via Miami, the right to swap first-round picks with Clippers in 2023 and 2025, first-round picks in 2024 and 2026 via rockets, and pick swaps in 2021 and 2025) and guard Shai Gilgeous-Alexander, forward Danilo Gallinari, and guard Chris Paul.

Both trades played a role in shifting the power balance in the NBA. George teaming up with the reigning Finals MVP Kawhi Leonard catapulted the Clippers into the championship contender conversation overnight. Westbrook being reunited with former teammate James Harden, however, was way more scrutinized. Fans and analysts alike were split into two camps when evaluating the Westbrook trade. Some people argued that acquiring Westbrook was an upgrade at the point guard position and made the Rockets one of the better teams in the Western Conference. Some people questioned if Westbrook and Harden would fit well together, arguing that both guards are too ball-dominant to get along.

Nineteen games into this NBA season, the Rockets are ranked fifth in the Western Conference with a record of 13-6. The main reason for the Rockets’ success is due to the outstanding play of Harden; the 2018 MVP is averaging 38.9 points (1st in NBA), 5.9 rebounds, and 7.8 assists. Westbrook is contributing to the team’s success, averaging 22.1 points, 7.6 rebounds, and 6.9 assists. His numbers are not lackluster by any standards, but they are not what fans have become accustomed to seeing from him.

So far this NBA season Westbrook has struggled to find a rhythm in his new role with the Rockets. He currently has a PER of 17.6, which is higher than the league average 15, but is drastically lower than his career average PER of 23.6. Westbrook’s PER number is a good indicator of his struggles this year because PER is a measurement of a player’s per-minute production. Not only is his PER suffering but his win shares is only 0.9 compared to Harden’s 4.4.

Westbrook is an alpha dog, there are no if ands or buts about it, but when he was traded to the Rockets, he was asked to take a step back in his role because he joined Harden’s team. People who questioned how well Harden and Westbrook would play together had their doubts about how Westbrook would respond to being downgraded from being Batman to Robin. They argued that there are not enough balls on the court for the both of them and to some extent they are right. It is not because Westbrook is upset with his smaller role, remember he was the second- best player on the Thunder when Kevin Durant was there. The reason Westbrook is struggling is because the Rockets already had a point guard in Harden. In head coach Mike D’ Antoni’s system the primary ball handler has all of the responsibility in the offense. The problem is that since being drafted by the Thunder he ran the offense as the primary ball handler. The only thing saving this marriage is the fact that Harden and Westbrook were former teammates. Their chemistry will improve as the season goes on, but because Harden is the man in D’Antoni’s system, Westbrook’s impact may remain the same.

It is very likely that when the dust settles on the 2019-20 NBA season the story for the Houston Rockets will be that they still didn’t put the right complementary star next to Harden.

Doncic, Mavericks Proving They’re No Fluke
David Fizdale Has Run Out Of Time With The Knicks