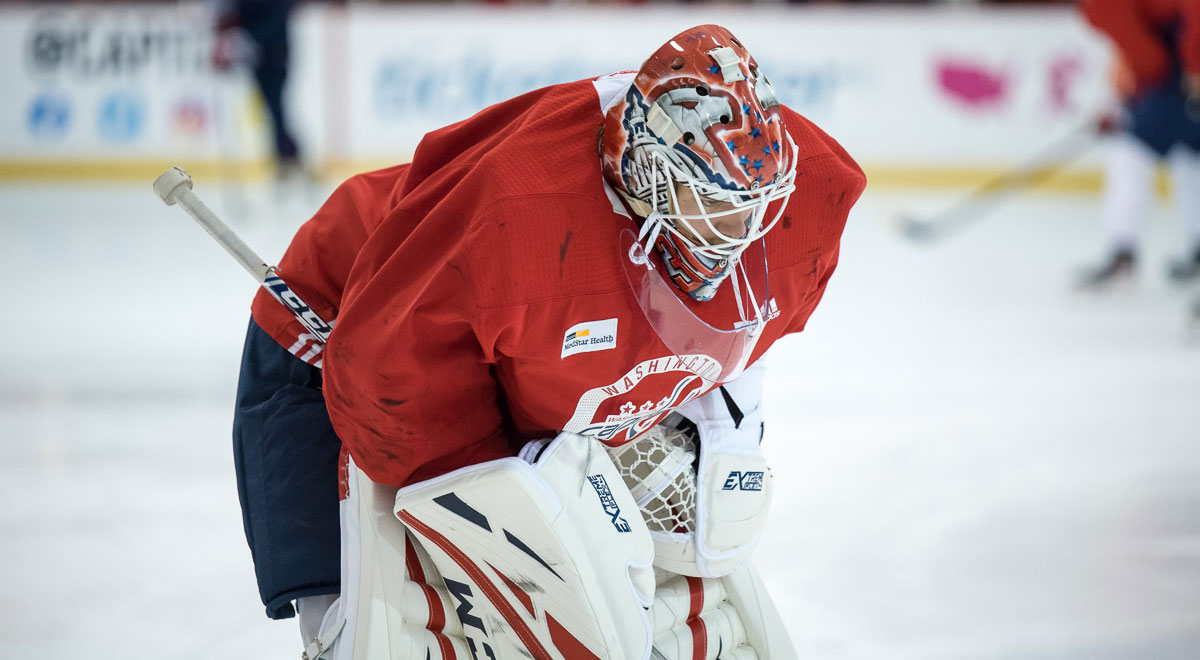 Where Has He Been?

#30 Ilya Samsonov made his first start in six weeks Sunday against the New Jersey Devils. The Capitals picked up a close 3 – 2 win thanks to an #8 Alex Ovechkin game winner. The Russian goalkeeper was on the shelf for a couple weeks and missed out on 16 contests for the Capitals stemming from COIVD related issues in January. Back on January 20, Samsonov and a few other Capitals skaters were placed on the COVID-19 list and declared ineligible to play for a short time while their health was monitored closely. During his absence, #41 Vitek Vanecek filled in for the absent goaltender.

After recovering, the second year goalie made a quick pitstop in Hershey, Pennsylvania before coming back to the NHL. He saw action in four contests for the Hershey Bears, posting a record of 2 – 1 – 1. With a goals against average of 3.25 and making 86 saves, Samsonov was brought back to the main roster to start against the Devils during Sunday’s matinee.

Back in the NHL

Samsonov got a rough welcoming committee in New Jersey. One of the first shots he faced zipped under his left arm for an early New Jersey advantage. The worrying bit for Washington fans was that the shot from #23 Mikhail Maltsev was nothing special. The 22 year old winger looked surprised his shot resulted in a goal as his teammates celebrated with him. For any goalie, let alone one making their first start in over a month and looking for a confidence booster, this is not how they want the game to start.

The returning Samsonov sealed off the net for the remaining first period, saving the other six shots with relative ease. Unfortunately, his troubles resurfaced in the second period. With his side up by one, he was called upon to make another save. New Jersey’s #17 Yegor Sharangovich raced passed the blue line carrying the puck. Seconds later the puck snuck its way through Samsonov’s right arm and into the net. Another worrying sight to see as it seemed like Samsonov could track the puck the entire time.

Neither shot seemed particularly dangerous yet both resulted in goals. With over 16 minutes remaining in the second period, there was still time for Samsonov to find his groove again. With some help from his teammates, Samsonov stood his ground for the remaining 36 minutes, making 11 more saves.

While it is certainly understandable that Samsonov has some rust coming back to the NHL, it disappeared by the time the game concluded. As time went on, the Russian netminder looked more comfortable and made some key stops to preserve the advantage. The Washington defense helped him out by limiting the number of opportunities New Jersey had offensively. Ultimately, Samsonov and the Capitals still came away with a win.

With the Boston Bruins next on the schedule, we can guess who the starting goalie will be. It would make sense to have #41 Vitek Vanecek stand between the pipes for at least the first contest. This would be the right call in my opinion. Currently, he holds a .909 save percentage and has allowed 2.81 goals per game across over 1,000 minutes.

The Bruins were the first team to defeat the Capitals in regulation on February 1. Vanecek gave up his highest number of goals this season during the contest, five. Limiting opponents to just two goals on average over the last six contests, Vanecek makes an ideal candidate to stimy the Bruins’ potent offense.

Samsonov does not seem fully ready to assume the starting position and that is okay. He has been away from the speed of the NHL and it can take some time to get used to. If Vanecek has a rough night against Boston on Wednesday, make the swap. Samsonov sat behind Braden Holtby during last season’s campaign and had great success, posting 16 wins in 22 starts with a .913 save percentage.

For the foreseeable future, Vitek Vanecek should be the Capital’s go-to netminder. He has been playing well recently and Washington’s other lines have been finding more success. Currently on a run of 6 – 1 – 1, they lead the Mass Mutual East Division. With three instances of back to back games for the Capitals in March, those might be perfect opportunities for Samsonov to start at least one of the tilts.

With Two Come from Behind Wins, Can the Coyotes Get Back on Track?
As the Trade Deadline Approaches, Should the Sabres Blow it All Up?