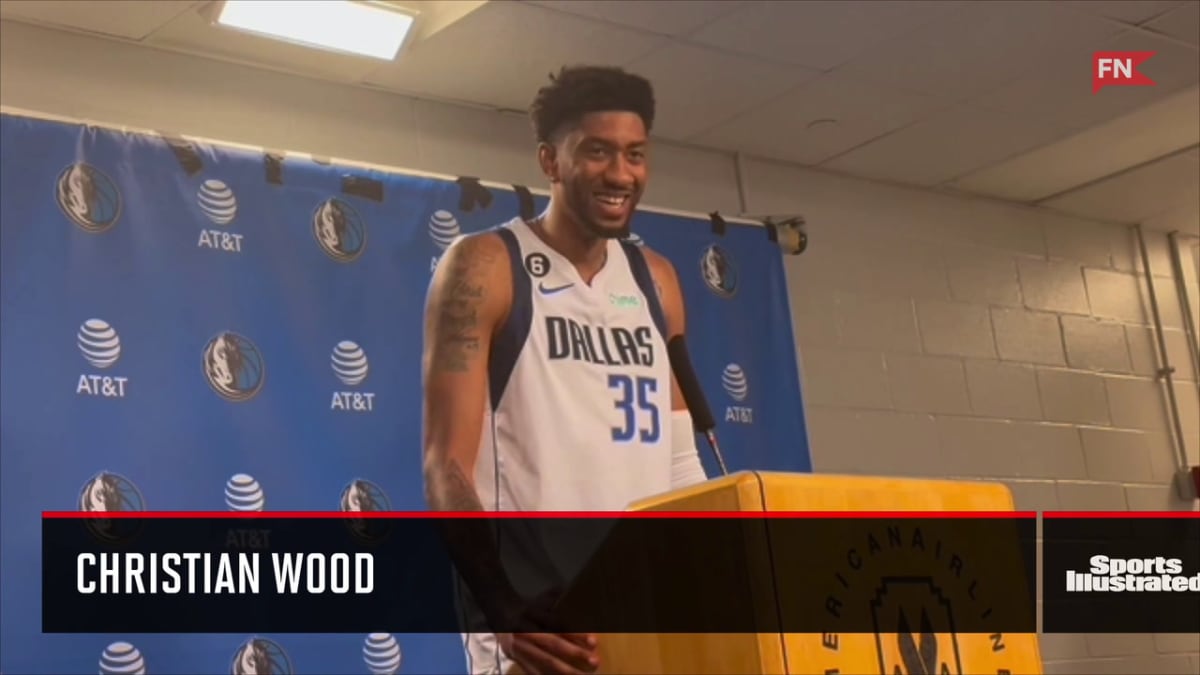 Christian Wood’s career up to this point has been marred by disappointment and losing, there is no way around it. This was not by choice or design; he was dealt in a sign-and-trade to a Houston Rockets team in 2020 primed to compete until the departures of James Harden and Russell Westbrook left the team gutted with no identity in that same offseason. Woods spent time with five different teams prior to his Rockets tenure with a mixture of G-League stints in his first few years in the NBA. The trade that brought Wood to the Dallas Mavericks could be seen as a moment of triumph and redemption for the Long Beach native, finally able to compete on a playoff contending team.

Mavericks head coach, Jason Kidd, was asked about what he wanted from Wood upon his arrival to the organization and what his expectations are going into the season while speaking at Dallas Mavericks Media Day.

“I want C-Wood to be himself. I’m not asking him to do anything that he hasn’t done,” says Mavericks head coach Kidd.  “He’s been in this league. He understands, you know, how to score the ball. Team defense is something that we will help him with as we go along here and he’s capable of doing it so we’ll hold him accountable to that.”

These expectations seem relatively reasonable, Wood isn’t being asked to be anything he isn’t. Wood should improve playing alongside JaVale McGee who should help Wood improve on his rim protection and overall energy on the defensive end. Kidd elaborated on his plans for Wood within the offense and where he fits rotationally on the team.

“I would bring him off the bench, by starting JaVale and Spencer and so that’s the way we’ll start. You know as we go forward… flexibility is something that you have to be as a head coach and he could start at times if the matchup is something that we want to look at. You’re gonna see a lot of different lineups out there so we can get the answers to the test… so when we make it to the playoffs that we are comfortable with guys playing with one another”

Clearly Kidd has placed quite a bit of thought into this since the Mavs acquired the PF/C in June. Wood seemed to be open to his role, whether as a sixth man or as a starter.

“I’m motivated either way, (if) it’s off the bench or starting either way… we can figure it out and (I’m) not really worried about who starts. Again, (I’m) more so concerned about who’s finishing the game. And if people were asking like, how would he feel about coming off the bench? I’m not too worried.”

Wood will be tasked with being a contributing member of the team, not necessarily a centerpiece of the offense like his time in Houston. The mentality has to change when you join a team that was so close to the NBA Finals and added you to help them get there. Wood was emphatic about what this chance means for him joining a competitive franchise.

The former Runnin Rebel not only understands the gravity and importance of this situation but is out to prove wrong what the naysayers have been harping on for a while: can he play well and contribute to a championship franchise? Wood seems to think so.

“I want to be a part of a winning team. I want to show them that, you know, I can do that. So it’s just about me being both motivated, you know, being early to everything and trying to show them, you know, what I can do”

Wood, in his redundancy, strikes a new tone in his emphasis on winning. The issue sometimes with players that put up excellent numbers on losing teams is that they get pigeonholed with the “empty stats” label similar to what had happened to Andrew Wiggins in recent years. Like Wiggins, Wood will be able to flourish in a less dysfunctional environment with a combination of young talent and veteran championship experience to learn from.

Wood will help to be able to fill the rebounding vacuum along with McGee for this Mavericks team that was made devastatingly clear in their series against the Golden State Warriors. Wood’s presence in the offense will provide Luka Doncic plenty of pick-and- roll and pick-and- pop options that will also free up other teammates like Spencer Dinwiddie and Dorian Finney-Smith to either space the floor or slash to the basket for easy opportunities. Wood made an intriguing assertion about Doncic when asked about how he felt playing alongside him now.

“I’m really excited,” Wood stated with a smile. “I don’t know if you guys have watched, I don’t compare Luka and James Harden together but they have similar play styles. I excelled when I played with a pass-first playmaking point guard and I think Luka is that and even better than what he shows. I think he’s a top five player right now.”

Wood will have quite a bit to prove going into this season and beyond but if he can stick to his role and not try to be more than he needs to be then this is definitely a team that can compete with the other powerhouses of the Western Conference. This season will be a test of how much Wood truly desires to win and how much effort he is willing to expend to reach the glorious mountaintop of NBA immortality as a champion.

CONCUSSION, WHAT IS IT?
Takeaways From Lakers Preseason Opener