Sleepers For The College Football Playoff 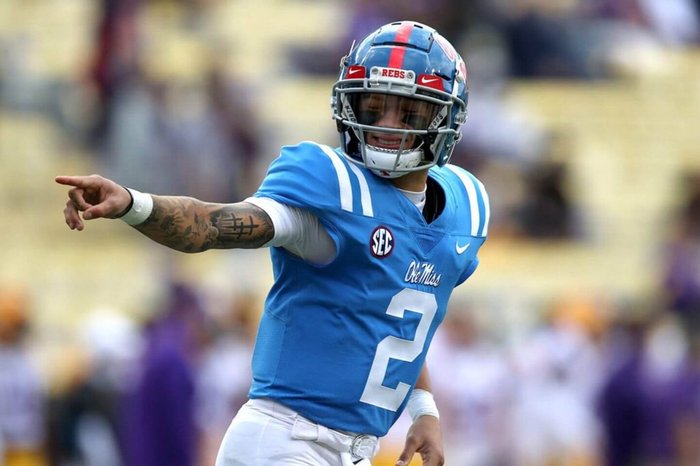 Heading into the fourth week of the College Football season and there is a plethora of teams that sit at 3-0 on the year. Teams are getting ready to get into their respective conference schedules and some teams may be thinking: “Hey, this could be our year.”

The 2020 season was so crazy and unpredictable that there was nothing for sure about the 2021 season—outside of Alabama. You have your favorites in Alabama, Georgia, and Oklahoma. However, there are a few teams in the Power 5 and/or Group of 5 teams that can make a run to the playoffs or be in a New Year’s Six bowl game. They don’t have to be already ranked in the top 25.  I’m going off the team’s remaining schedule and actual playoff potential. Some teams will need a little bit more help than others, and winning alone won’t guarantee anything.

This is one that could be a stretch especially after the Hokies were upset by West Virginia on the road last week. However, they do still have one top-10 win after defeating North Carolina back on opening weekend. Virginia Tech hosts Notre Dame on Oct. 9 with a chance to add another top-10 win. Meet up with Clemson in a potential ACC Championship Game, and pull off the upset there along with some teams getting upset all hope is not lost for the Hokies.

The Wildcats have moved up into the top-25 rankings and have put themselves in a good position. Their remaining games are in conference and they’re not going to be easy: at Oklahoma State, and at home to Oklahoma and Iowa State the next three weeks. If the Wildcats can pull off those upsets and meet one of those three teams in the Big 12 Championship—it could be 2003 all over again for Kansas State.

People are realizing that the Big Ten is more than just Ohio State. This Nittany Lions squad is good and has one of the best secondary in the country. After their matchup with Villanova this Saturday, they have the meat of their schedule with a rematch against Indiana on Oct. 2, and two tough road games against Iowa and Ohio State. Penn State gets through that, and they could be seeing the playoffs.

Key Match-Up Remaining vs. No. 3 Oregon

Another stretch here, but even after their loss to a good Fresno State team UCLA still can come out on top in the Pac-12 South. An October meeting with Oregon can boost their resume. It still would be tough because they would need a lot of chaos to happen in the rankings.

The Rebels have been a sleeper pick in the SEC West all season. Matt Coral looks the part at Quarterback for Ole Miss and so far, they’ve been running like a well-oiled machine. After their bye, this week they travel to Tuscaloosa to face Alabama and at home to Arkansas the week after. That’s just part one of their SEC gauntlet, if Ole Miss gets past that they have Auburn on the road at the end of October, and Texas A&M in November.

The Tigers didn’t make it easy on themselves, and they might have some controversy with their last win over Mississippi State, but they are 3-0. The playoffs are a stretch for Memphis, but if they get past their tough road tests against UCF and Houston respectfully, and meet with Cincinnati in the American Conference Championship game to notch a potential top-10 win (if Cincy gets past Notre Dame). The Tigers could be back in a New Year’s Six Bowl.

Last season, BYU were crushing their opponents but their schedule wasn’t the toughest due to COVID-19. This season the Cougars started the season with three straight Pac-12 opponents—including in-state rival Utah. BYU will be favorites the rest of their schedule until the regular season finale against USC. If Cincy or Memphis isn’t undefeated by December and the Cougars win out, they can make the case of the New Year’s Six Bowl.