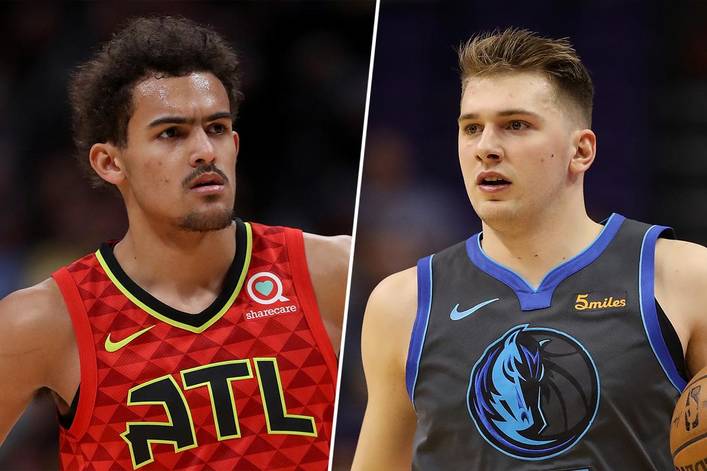 Luka Doncic’s and Trae Young’s NBA career will forever be intertwined after being drafted in the 2018 NBA draft. Doncic was the first of these two young stars to be drafted, being taken off the board third overall to the Atlanta Hawks. Trae Young was taken two spots later at fifth overall to the Dallas Mavericks. A big plot twist that started this Doncic and Young story occurred that night during the draft, when the Hawks and Mavericks decided to swap picks. This move started the debate of who is better and which team won the trade.

Leading up to the 2018 NBA draft NBA fans began to hear whispers about a EuroLeague phenom named Luka Doncic with the goal of taking the NBA by storm. Before he declared for the NBA draft, Doncic was the highest rated foreign prospect with an already impressive resume and winning pedigree. He made his professional career debut with Real Madrid in the Liga ACB in 2015 (the top professional basketball division of the Spanish Basketball League system). During his time in the Liga ACB he was a two-time Spanish King’s Cup winner (2016, 2017), two-time ACB Best Young Player and EuroLeague Rising Star (2017, 2018), Liga ACB MVP (2018), three-time Liga ACB champion (2015, 2016, 2018), EuroLeague Final Four MVP (2018), EuroLeague MVP (2018), and EuroLeague Champion (2018).

Trae Young on the other hand made his name in the NCAA before declaring for the NBA draft. Before committing to the Oklahoma Sooners in 2017, he was the second-best point guard prospect by ESPN and a McDonald’s All-American. During his one-and-done college career, Young was the NCAA scoring and assist leader, the Big 12 Freshman of the Year, consensus first-team All-American, and Wayman Tisdale Award winner (given to college basketball most outstanding freshman). Young’s elite playmaking ability and sweet shooting stroke led fans and analyst to prematurely proclaim him to be the second coming of Stephen Curry.

Both Young and Doncic proved their worth with their play on the court last season. Doncic separated himself from the rest of his class in the Rookie of the Year race early last season. He did not look like your average rookie; his professional career overseas definitely prepared him for the competition he would face in the NBA. A few months into the season everyone crowned him the Rookie of the Year and declared the Mavericks the winner of the draft night trade. Young was determined to not be outdone by Doncic and raised his game in the second half of his rookie season, giving Doncic a run for his money in the Rookie of the Year Race.

Doncic averaged 21.2 points, 7.8 rebounds, 6 assist, and 1.1 steals per game last season. Young averaged 19.1 points, 8.1 assists, 3.7 rebounds, and 0.9 steals per game last season. By the end of the season Doncic won the award but the draft night trade seems to be a beneficial trade for both the Hawks and the Mavericks. This year both of these young stars look to be drastically better than their rookie campaigns. Through four games so far this season Doncic is averaging 25 points, 6.8 assists, 8.8 rebounds, and 2.3 steals; Young is averaging 26.8 points, 7.3 assists, 5 rebounds, 1 steal, and has increased his three-point shooting percentage by 17.6%.

Doncic and Young are clear cornerstone pieces for their teams for the near future. The Mavericks are fun to watch this season due to the acquisition of Kristaps Porzingas last season and Doncic running the show. This is a dynamic duo that should continue to make noise for years to come. The Hawks on the other hand had a very good 2019 draft; drafting De’Andre Hunter from Virginia (4th overall) and Cam Reddish (10th overall) from Duke. Their young core of Young, John Collins, Hunter, Reddish, and Jabari Parker looks to be promising. These two franchises still have a few more moves to make to be title contenders. Hopefully, the Doncic and Young story will eventually develop a championship matchup chapter a few years down the line.