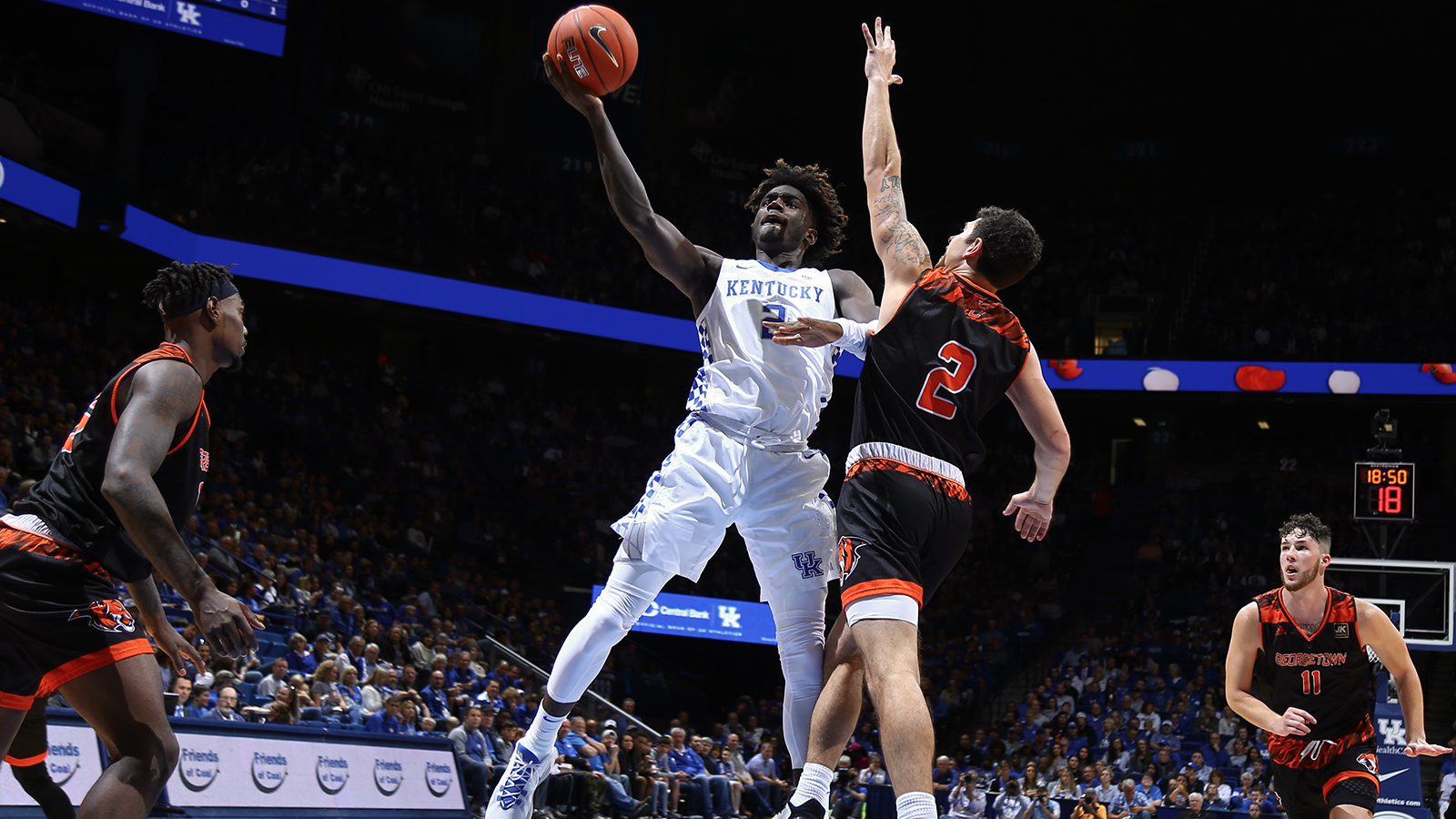 Five-star freshman Kahlil Whitney’s days in Lexington could be numbered. He entered the season as the highest ranked recruit for the Kentucky Wildcats, but has seen his playing time steadily dip throughout the season. Whitney opened the season playing 20+ minutes per game, but has since struggled to produce and has played only 20 minutes combined across his last three games, including a mere two minutes of action in the team’s win over their archrival Louisville Cardinals.

To be fair, the bar has been set awfully high for freshmen at Kentucky. Whitney has the challenge of meeting expectations set by gifted one-and-done players such as Anthony Davis, John Wall, Malik Monk, Jamaal Murray, and Karl Anthony-Towns, to name a few. The season is young, but Whitney has come nowhere close to living up to those expectations.

Whitney currently sits as Kentucky’s eighth leading scorer and rebounder with 4.4 points and 2.2 rebounds per game. He’s struggled to score from just about all spots of the court, shooting 40% overall, 47% from the free throw line and 29% from behind the arch.

Scoring isn’t everything. Offensive production is naturally going to fluctuate from game to game. When you don’t have it, as Whitney often hasn’t, you’ve got to affect the game in other ways. The freshman forward has struggled to find other ways to contribute and Coach Calipari has taken notice. Whitney’s greatest strength is his athleticism. That makes it even more puzzling to see how sluggish he’s looked on the court lately.

Whitney seems to be struggling to shake off the rust when he comes off the bench in limited minutes. He’s getting beat for rebounds and blown by on drives too often. The young man’s confidence looks shaken.

To his credit, Whitney has remained a good teammate throughout his struggles. “He was the biggest cheerleader,” fellow freshman Tyrese Maxey said after the team’s win over Louisville. “Even after the game, he was really hyped and very positive, which is really good. That’s how you have to be.”

One may argue that Calipari has been too hard on his young forward. Whitney certainly doesn’t have a long leash these days. There were three or so separate instances in Kentucky’s win over Missouri Saturday where Whitney was subbed out after only about a minute of being on the court. Freshman, like all teenagers, need chances to make mistakes and grow from them. This is a luxury that hasn’t been afforded to Whitney.

Kentucky fans should be worried. At this point it looks like leaving for the NBA draft is out of the question for Whitney, but there are other routes out of town. Five-star talents will always have plenty of suitors in the transfer portal. If Whitney doesn’t see his minutes increase soon, you have to wonder if he begins to get frustrated.

One thing is for sure: the young man’s toughness and ability to persevere in the face of adversity can’t be questioned. Basketball is not life and death, and Whitney can tell you that first hand. Growing up in Chicago he was shot at multiple times. He saw members of his family suffer gunshot wounds. With all that Whitney has had to overcome off the court, he can handle anything this game has to throw at him.

For now, Whitney needs to make the most of his limited minutes. He’s got the ability to be a difference maker, he just has to continue working to earn back the trust of his coaches. If Whitney can play to his potential and improve an already talented team, Kentucky may be poised to make another deep tournament run.