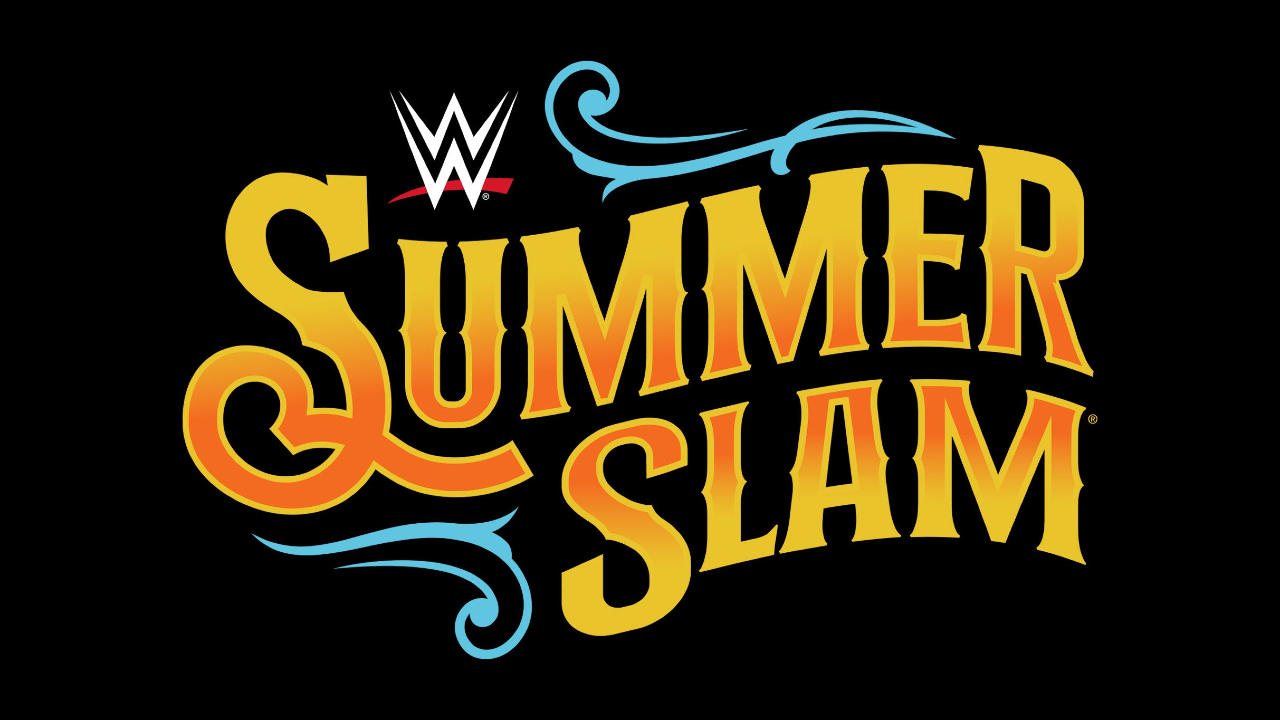 The commentators are split in their decision between Roman Reigns, the reigning Champion, vs. Broc Lesner in view of who would win the title. The battles were going to take place in Nashville, Tennessee, to a capacity crowd of 48,449 attendees.

Hall of Famer Kane, now the mayor, made that announcement in Nissan Stadium.
There is a significant amount of animosity between Lesner and Reigns.  I saw Reigns legitimately get beaten by Lesner only to be thwarted by the USO’s. If it weren’t for the USOs, Lesner would be holding the belt by now.

The event opened with now ‘Big Time Beck”, formerly “The Man,” challenging “Bianca Belair” (the hometown favorite). This match was for the Raw Woman’s Championship. Bianca’s outfit was royal blue with white fringe, whereas Lynch’s was fiery with orange and red colors. However, it looked more like a work in progress and half-finished. They should have gone back to the drawing board with that look.

Lynch was focusing on Belair’s arm, but Belair’s athleticism saved her. After a series of arm bars, Belair was able to escape. Belair should make that ponytail of her into a clip-on one. It is detrimental to her efforts in the ring. Constantly it is used against her. At one point, Lynch grabbed her right shoulder as if it were injured.
After being dragged out of the ring, Belair’s body presses Lynch and slams her to the floor. Bianca Belair’s body presses Becky Lynch and uses the “K.O.D.” to secure her title, leaving Becky Lynch wanting more and pouting. Lynch ends up extending her hand, and Bianca is apprehensive. She remembers what had been done to her in the past when she encountered Lynch.
Immediately the crowd’s attention is drawn towards “Bailey,” who had disappeared for a while. She is accompanied by “Dakota Kai,” and “IQ Shirai” also shows up. All three approach Belair and Lynch steps in unexpectedly to offer her support. The three turn tails and back down and turn away.

Logan Paul vs. The Miz

The next match is between ‘The Miz” and his wife “Marie” and “Ciampa” vs. Paul Logan.” The Miz”, much like Roman Reigns, can’t win a fight on their own without resorting to dirty tactics and underhandedness. Logan Paul, his former tag team partner, which he double-crossed at the end of the last Summer Slam, was back for revenge.
The Miz wasted no time in mocking Logan Paul. A backflip produced by Paul floors “The Miz.” “The Miz” retaliates with hand chops, then Paul reverses and gives him the same. Why should “Ciampa” get involved anyway when there is only one person to fight with?

An unexpected maneuver by Paul jumps off the top rope and ends up flooring both of them, followed by a sneaky forearm smash and a fireman-carrying body slam on Paul. He then applies the figure four leglock to ‘The Miz”. He is writhing in pain. Paul then executes a flying body slam! “Ciampa” gets ejected by the referee for trying to interfere. He refuses to leave and pulls up a chair ringside.
‘A.J. Styles” lends a helping hand and sets things right. Paul clears the commentator’s table, plants ‘The Miz” on it, and catapults himself off the top rope onto “The Miz.” “The Miz’s” wife distracts the referee. While “The Miz” recovers and tries to sneak up behind Logan Paul, he jumps to the side, and “The Miz” nearly decks his wife! Logan Paul pins ‘The Miz” for the win!

The next match brought “The Money In The Bank” winner, “Theory,” the youngest in WWE history. Unfortunately, his attitude and smugness, and arrogance leave him very undesirable. The United States Championship Belt is on the line against “Bobby Lashley.” Theory doesn’t waste any time and bashes Lashley with the briefcase! From then on, Lashley schooled Theory with a series of devastating moves.
Theory, the wimp, picks up his briefcase, followed by a dropkick. Then, while going toe to toe, a series of hammering blows leads to Theory getting hoisted above Lashley’s head and thrown into the air only to crash face first onto the canvas!
Lashley body presses Theory and then applies “The Hurt Locker,” and it’s all over for Theory! He submits. So much for Vince McMahon’s protege’.

Judgement Day vs. The Mysterios

The following team labeled “Judgement Day” reared its ugly head. I disapprove of the schtick that they represent. There already is too much darkness that surrounds us in our daily lives nowadays. It’s time we look towards the light! The team consists of “Damian Priest,” “Finn Balor,” and “Rhea Ripley.” They took on the ‘Mysterios”, “Dominik,” and “Rey.”
They ambushed Rey during his celebratory event backstage at Madison Square Garden on his 25th anniversary behind the scenes. Before the bell sound, the teams clash! The father and son tag team concept seems to work, but Dominik needs more experience and muscle combined with this heart. Priest and Balor single out Dominik and work on wearing him down mercilessly.

Finally, Dominik crawls back to Rey and tags him. Rey attacks Priest, followed by Balor. A steel chair is introduced without any disqualification. A high kick to Rey’s face floors him, followed by Finn Balor flying through the air towards him. Rey pins Baylor, only to be thwarted by Priest interfering. Balor and Priest were on the ropes, and “Rhea Ripley” interfered with the match!

Suddenly, from a nearby stage, “Edge” rises to the occasion and goes to town! Balor ended up on the ropes, only to be kicked simultaneously by both Mysterios! Finally, Rey flies off over the ropes and pins Balor for the win!

Cory Graves and Michael Cole were the commentators.

Their associate ‘Pat McAfee” was challenged by “Happy Corbin.” Surprisingly, Corbin is serenaded by a choir singing ” Bum Ass Corbin,” taunting him even more. It starts as a shove, then returned by a swift kick in the face to Corbin.
Next, McAfee is hurled by Corbin like a rag doll, followed by punches. Finally, Corbin slams McAfee into the barriers. Next, McAfee gets laid out on the commentator’s table while Corbin punches him with his fists.
He then leaps up to the top rope and gives Corbin a suplex! Toe to toe, they fight, and Corbin flies into the ring post and out of the ring. McAfee climbs to the top rope, regains his balance, and pounces on Corbin. McAfee returns the “low blow” that Corbin had dealt when they were in Las Vegas. He flips him over and pins him for the three counts.

The Street Profits vs. The USO’s

Next, “Hall of Famer” “Jeff Jarrett” is introduced as the guest referee for the tag-team championship match between “The USOs” and “The Street Profits.” Jarrett being eagled-eyed observes as each wrestler engages the other.
Of course, Jey USO gets a cheap shot in, and Jimmy gets a headlock on “Montez Ford.” The tag is made, and “Angelo Dawkins” jumps into the ring. Jimmy flies off the top rope onto Montez. Then both USOs fly off opposite ends of the ring simultaneously onto Ford.

Jey Uso almost kicks Jeff Jarrett in the face and nearly pins Ford. Ford then jumps through the ropes, only to be greeted with a double kick by The USO’s. Back into the ring, the USOs finish him with another double kick!
An unexpected turn of events is when “Riddle” challenged “Seth Freak’n Rollins” to a match. The two clashed outside the ring on the walkway. Rollins dispensed his neck stomp, and Riddle lay motionless in the center of the ring. Adam Pearce and others attended to Riddle and brought him to his feet.

The Smackdown Woman’s Championship was the next title match between ‘Liv Morgan” and “Rowdy Rhonda Rousey.” Liv is looking for validation, whereas Rhonda wants to recover her title. Immediately they go toe to toe, and Rousey dominates Morgan.

Rousey overpowers Morgan, and she fights back with passion. While Rousey gets an armbar on Morgan, and it’s reversed. Morgan clutches her arm, and Rousey applies the armbar. Frequently the armbar is used by Rousey. At one point, it’s questioned if a fracture had occurred. Rousey had an armbar in the final position, not realizing that her shoulders were on the mat, even though Morgan tapped out!
Morgan retains her Championship Belt, and Rousey is infuriated! However, Rousey isn’t having it and attacks both Morgan and the referee and applies the armbar.

Finally, the long-awaited “last man Standing” match had come about. It was between the Champion ‘Roman Reigns” and “Brock, “The Beast” Lesner.” Lesner, the epitome of The Alpha Male vs. “Roman,” “The Spear,” “Superman Punch,” “Reigns.” The undisputed WWE Championship match is only to be tainted by Theory cashing his
All feared the Money In The Bank” contract at the end of the match.

A 680-day reign might come to an end for Reigns. Will Lesner be Reigns’ Kryptonite that unarms his Superman punch? Reigns walk to the center of the ring with The USO’s behind him. He grips the microphone and says, “acknowledge me.” Lesner’s music blares in the air, and then he struts down the gangway. He then jumps into a big, red tractor, climbs into the bucket, and jumps into the ring. What an entrance!

Lesner leaps out of the bucket while Reigns holds up the two belts. Then, Lesner gives Reigns a suplex outside the ring onto the hard concrete floor! Then, suplex after suplex, he flips Reigns. Reigns, in turn, rakes Lesner’s eyes but is slammed into a steel girder., then thrown over a barricade, followed by another suplex.

Lesner takes a table out from under the ring and sets it up. Paul Heyman gets on his knees to distract Lesner, and Reigns sneaks up behind him and slams Lesner onto that table! Another table is set up, and Lesner is slammed through it.
Roman Reigns sets up for the “Superman Punch” and hits Lesner twice, followed by his “Spear” move. Reigns lunges toward Lesner, but Lesner moves out of the way. Reigns flies through the ropes. It looks as though Reigns is in trouble holding his arm. Lesner jumps behind the wheel of the tractor. Broc Lesner picks up a piece of the table that had been destroyed previously and clobbered Reigns with it.

Reigns is out for seven seconds, put into the tractor’s bucket, and dumped into the center of the ring. Multiple “German Suplex” are dished to the “Tribal Chief.” Reigns get to his feet after an eight-second count, and Lesner throws him into the air like a rag doll.

Reigns reverse and applies “the guillotine.” Lesner changes it, and Reigns appears to be out cold and lifeless. Lesner gets back in the tractor and upends it by putting the tractor’s bucket beneath it. Reigns tumbles out of it.

Lesner clears the table. The USOs, as usual, cheat by interfering. Lesner puts them in their place quickly! Lesner picks up Paul Heyman and slams him down hard onto the table! Heyman is out cold! In comes Theory to use his “Money In The Bank” contract. Lesner dispenses with Theory and The USO’s double team Lesner. Again, Roman Reigns can’t win a challenge by himself!

Reigns take Theory’s Money In The Bank briefcase and thrashes Lesner with it. Then Reigns takes one of his belts and hits Lesner in the face. Another belt smacks Lesner in the face by Reigns. The USO’s constant interference in Reigns matches left much to be desired for Reigns’s credibility. They interfered in a match that Lesner won and should be wearing one of the belts today.