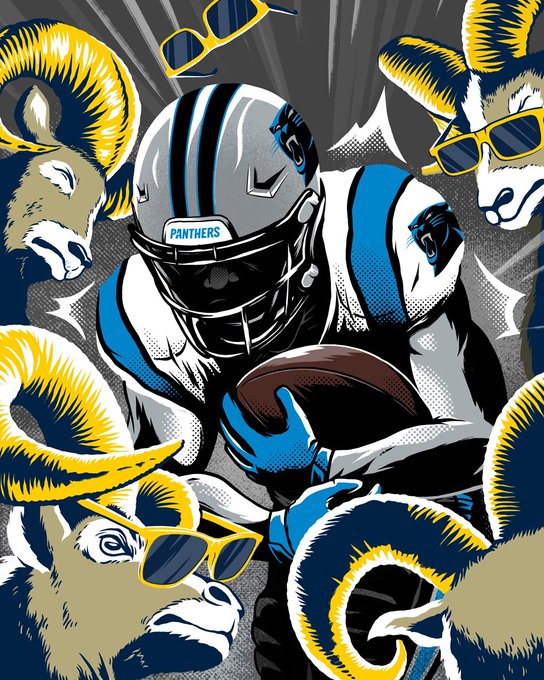 Charlotte, North Carolina – I believe that two of the programs with the biggest amount of pressure on them to start the 2019-2020 NFL season are meeting today in the Queen City.

The Los Angeles Rams maintained, even exceeded, expectations a year ago when they tore through their 2018-19 schedule like a buzzsaw and made it all the way to the Super Bowl, with the help of some questionable officiating versus the New Orleans Saints.

Once there, however, they left the biggest steaming pile of chocolate pudding emoji in five years, when the Denver Broncos left horse biscuits all over the field at MetLife in a 35 point defeat, though Peyton Manning and the Broncos learned from that and bounced back to a nice closure to Manning’s career and Super Bowl 50 win two years later.

The Rams, led by quarterback Jared Goff, might be on a tighter time frame when it comes to expectation. Anything other than a second consecutive appearance in the big game would be seen as regress, not progress.

(Of course, anything over a 13-3 game would be progress as LIII wasn’t the most riveting of games for the Rams or the New England Patriots).

The fact that L.A. just dished out $134 million to Goff ($84 million in the first three years of the extension) shows that they believe in the young man from the Golden State, but it also means that there’s the added pressure to go back again and again, especially this season.

Goff is amongst a triumvirate of players that were extended without really accomplishing much of anything – Dallas’ Ezekiel Elliott held out until he received $90 million and Philadelphia’s Carson Wentz’s $144 million extension puts out over $350 million worth of expectation on the table to three guys who haven’t proven they’ll give a solid return on investment. (And since we’re talking over paid, let’s not even talk about Matthew Stafford).

The Rams are set in their receiving lineup with Cooper Kupp, Brandin Cooks and Robert Woods, while Todd Gurley and his left knee will be tested this afternoon.

In Carolina’s locker room, however, quarterback Cam Newton says he’s “feeling like a rookie again,” though at $14.5 million this season, he’s certainly getting paid a lot more than rookie scale.

After being drafted in 2011, the eighth-year 30 year old has had expectation laid at his doorstep since Day One, but never seemingly had the best supporting cast around him to deliver. Not since Steve Smith was a Panther have I seen Newton have a go-to guy with any consistency.

The most encouraging thing I’ve seen this summer and pre-season has been Smith coaching Newton on the sideline after seemingly every play about how he can get better. Newton has Christian McCaffrey in his backfield, and Curtis Samuel and DJ Moore look to be the future as Carolina’s receiving corps, again pitting Newton against a wall of expectation, but question marks on deliverability.

Watch for the debut of Clay Matthews for L.A. and the continued excellence of Aaron Donald, which could stifle Newton and McCaffrey.

Brown To the Patriots: Forced Will or Mental Health Crisis In The NFL?
Giants Defense Beaten Up in Week 1, but Mindset Still Positive