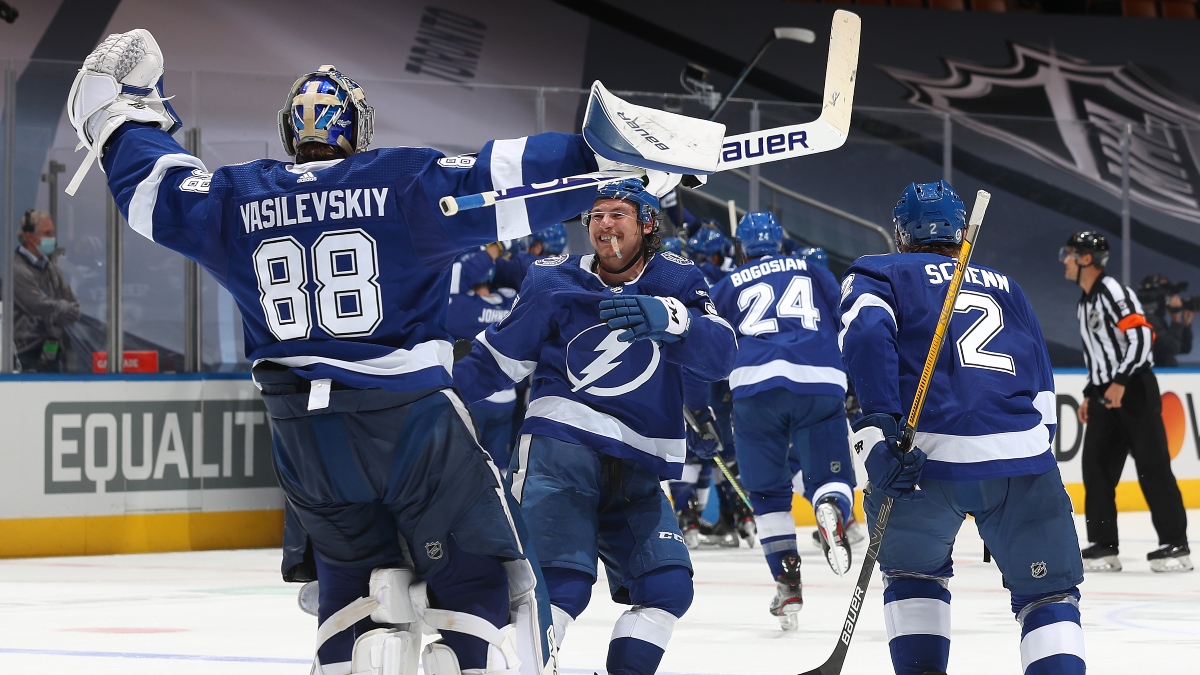 Although the Tampa Bay Lightning did not take seven games to advance to the conference finals like all the other teams, they did not initially experience a momentum strike in their favor to begin the second round series against the Boston Bruins.

The Bruins, who finished with the best regular season record, broke the ice with the first three goals of the series, one in each period.  Despite the absence of star goaltender Tuukka Rask, who had chosen to opt out of the bubble, Jaroslav Halak made 35 saves to propel the Bruins to a 3-2 victory in game one. While the Lightning fell short of a comeback in the third, their resilience as a team throughout the season made their late game surge look like a promising setup. That resilience would come into play in game two.

Despite outshooting the Bruins by a 40-25 margin, the Lightning were still unable to keep the Bruins off the board, sending the game to overtime tied at 3-3. Trailing in the series one game to nothing the Lightning did not let the pressure of another sudden death overtime hamper their persistence. The team has been no stranger to overtime in the playoffs. Their first game of the playoffs against the Columbus Blue Jackets saw the Lightning win in a bout that went to a historic fifth overtime. This time around, the Bolts struck early when forward Onej Palat poked one in from the right corner of the crease off a wrap-around attempt by Patrick Maroon. This tied the series at one apiece. Shift in tides? Well that shift in the series tide became apparent for the Lightning in game three.

The special teams of the Lightning, who had been 0-for-16 on the power play in this year’s playoffs, scored three power play goals as they vanquished the Bruins 7-1. The Lightning did not let this dominance instill overconfidence in the team as head coach Jon Cooper told ESPN, “Let’s be honest. This is an aberration. They’re the President’s Trophy winner. You turn the page, just like you turn the page on an overtime thriller.”

Turning the page is exactly what the Lightning did in game four after the series saw a three-day hiatus out of respect for Jacob Blake and the Black Lives Matter movement. The team put a lockdown on the Bruins offense. The line of Palat, Nikita Kucherev, and Brayden Point held the Bruins without a single shot in the last five minutes. The core of the Lightning defense, Victor Hedman, who had been big in scoring throughout the series scored another, accompanied by a pair of goals from red hot scorer Onrej Palat.

In game five, with the Lightning only needing one more victory to advance, they faced yet another adversity when they lost star defender Kucherov after he got high sticked early. Thankfully one of their other defensemen, Ryan McDonagh, who they were missing the past three games, returned. Late in the third, the Lightning took a 2-1 lead on an Anthony Cirelli redirect off another long shot from Hedman. The Lightning looked ready to close out the series but the Bruins, who have also shown resilience throughout the playoffs, said “not so fast” when David Krejci poked in a nice pass from captain defenseman Zdeno Chara, who was quite possibly playing his last game after 14 seasons with the Bruins.

The Bruins’ season was skating on thin ice against the masters of overtime hockey. That mastery came through in the second overtime period from none other than Hedman, who slapped one in from the left point to clinch the series for the Lightning. As if the series was not already scripted enough, the man who set a nice screen in front of the goal that helped aid Hedman’s series winning shot was Patrick Maron, the same hero who scored the series winning overtime goal in game seven of the second round in last year’s Stanley Cup Playoffs for the eventual champion St. Louis Blues.

In 2019, the Tampa Bay Lightning were disappointingly swept by the eighth seeded Blue Jackets in a historic first round upset. After avenging the Blue Jackets in the first round of this year’s playoffs, the Lightning have also avenged the all-around frustration surrounding the team. From their captain Steven Stamkos going down earlier in the year, to power play struggles, the Lightning were able to channel out these past frustrations and take the series in just five games. “We’re not taking no for an answer,” explained Hedman about the team’s ongoing overtime success.

As the Lightning have their sights set on the Eastern Conference Finals for the third time in five years, the resilient bunch will not take no for an answer for the remainder of the Stanley Cup playoffs. They will look to electrocute their next opponent, the New York Islanders, to move one step closer to hoisting Lord Stanley. As for the Bruins, it could be a long offseason not knowing the return status of their team captain.