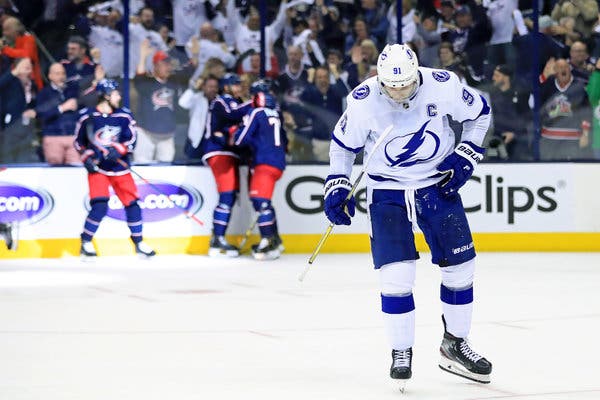 Last season, The Tampa Bay Lightning squad was the powerhouse of the NHL! Their starting line of Nikita Kucherov, Steven Stamkos and Ondrej Palat were the stars of Tampa Bay Lightning’s squad. They proved they were the best overall team in the NHL last season with an overall record of 62-12, which was a new NHL record and they had 128 points overall. To add, they were the top team in the playoffs, blowing everyone else out of the water. All the stars were aligned for them to win the cup,  BUT WHAT THE HECK HAPPENED?

As the playoffs opened and the Lightning faced the wildcard Columbus Bluejackets, they were expected to wipe the ice with the team that barely made it into the playoffs. Only that’s not what happened. John Torts had another thing coming for the confident Lightning. He motivated his team for the second period and third and they showed up beating the Lightning 4-3. After being humiliated on national television by Columbus, Tampa went home early and had plenty of time to refocus and regroup and take some much needed time off.

They are back this season ready to roll and look for revenge come playoffs time. They have nothing to prove. They are a strong team and their lines last season worked well together. Their first line of Palat, Stamkos and Kucherov combined for 94 goals and 166 assists. Important people they acquired this postseason could give them the extra boost they needed last season in order to win. Kevin Shattenkirk signed a one year deal after playing for the New York Rangers. He will join Tampa’s solid defensive core. A huge bonus for Tampa is the re-signing of their Vezina Trophy winner, Andrei Vasilevskiy. Nolan Foote signed an entry-level contract with Tampa for 3 years, coming out of the WHL. He lead his team in the goal category with 17 power play goals. He had 138 points overall in the WHL showing this kid can skate. He will add power to Tampa’s already dangerous power play.  These key moves with contribute to Tampa’s offense even more then last season.

So what really happened? Were they fatigued, or could they just simply not finish? When asked what he had happened to the team, Captain Steven Stamkos replied, “If we had the answers, we would have found a way to win a game, It sucks.” Coach John Cooper was in awe with how his team was the number one seed and simply just could not finish. “When you have the amount of points we had, it’s a blessing and a curse, in a way. You don’t play any meaningful hockey for a long time. Then all of a sudden, you have to ramp it up. It’s not an excuse. It’s reality,” Cooper stated.  Injuries were a key contributor as Victor Hedman missed 14 games this season with on and off issues. He reported to training camp in Tampa and quoted, “I am ready to go.”

Luckily for Tampa, they get to put last season behind them and focus on this year. They have all the boxes checked off for being the next Stanley Cup Champs, but can they be a finishing team this season? Tampa opens up the 2019-2020 season against Florida on the 3rd of October.

Road to the Super Bowl: Indianapolis Colts
2020 In The Lou!