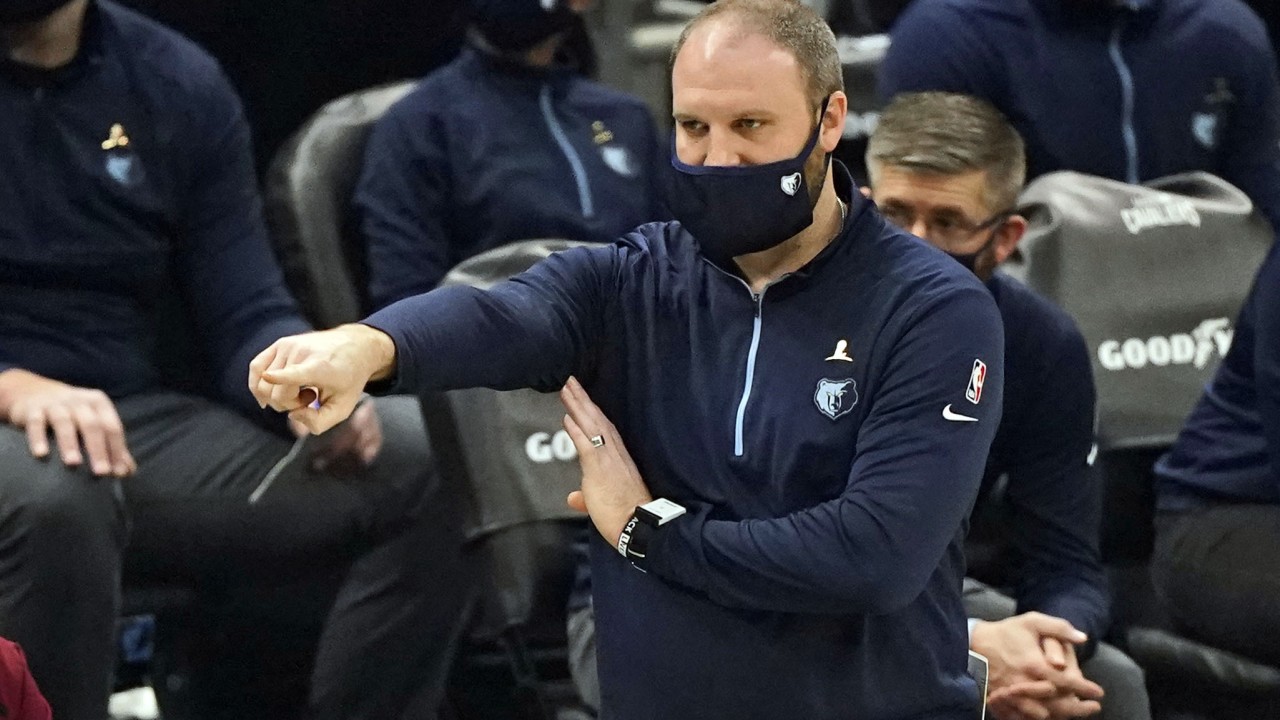 At this point, the NBA has been around long enough that it’s rare when a coach faces an obstacle that’s truly unique. Players have been disgruntled for just about every reason imaginable. Coaches have had to maneuver around rosters with herculean amounts of talent. In the Orlando Bubble, they even had to work out whether to wear polos, suits, or sweatsuits among their staff. If something in the NBA could go wrong, it most likely has gone wrong. Many times.

And yet, last Wednesday, Taylor Jenkins found himself facing a barrier that could only be brought about in a season shrouded by a pandemic. While the rest of the league played on as usual, the Memphis Grizzlies faced nearly two weeks of postponements, forced to isolate after nearly half their roster was flagged by the league’s health and safety protocols. Though coaches normally face a cease in games over the all-star break, that gap in the schedule is always anticipated–and it’s not like other teams are gaining crucial reps while some miss out. Never before has a team been left stranded miles behind the pace of the league. Without a fine-tuned approach to the break, Jenkins and company may very well have lost all momentum from their five consecutive wins.

So, how did the Grizzlies navigate their perilous time away from the spotlight of the NBA? Jenkins employed a three-pronged approach. Though the team wasn’t able to practice together, the league office did allow for individuals workouts–one player, one coach. They took advantage of being able to tailor routines to best fit the needs of Grizzlies on an individual level, crafting benefits that team-wide practices aren’t able to afford. “I took this time to allow my ankle to heal even more,” said Ja Morant, still mending an ankle sprain that sidelined him for nearly a month. “Although it was tough, it was good for me.” With a litany of Grizzlies on the injured reserve, Jenkins also mentioned that many of their players were able to receive individual care.

Though on-court action was limited to an individual basis, the team quickly shifted their film work to fit the needs of a group that wouldn’t be able to gather together. Film sessions were coordinated over Zoom, but much of the important work came in the form of pre-recorded videos curated for daily consumption. Coach Jenkins stressed his use of film as a reminding tool rather than solely a teaching tool–one of the key elements of the team’s video work was a reel focused on the team’s habits, to be watched on a daily basis. “[The pandemic] is definitely an opportunity for us to get creative,” reflected Jenkins. “Every day can bring something new and my message to [the team] was the integrity of what we do every single day can’t be lost…whatever it is we always find ways to get better.”

It’s clear that the pause has also allowed players some valuable time to reflect on the ways they can take their game to the next level. Dillon Brooks cited “watching some of [his] bad games” as springboard to a wealth of knowledge. “[I saw] how could I have done better, what reads I missed, what possible other reads could I have seen, just trying to amplify my game.” Brooks didn’t limit his film habits to basketball either–to the delight of nerds everywhere, he admitted to burning through the entire Lord of the Rings trilogy during isolation (he’s currently working through the Hobbit movies, which he called the “three other ones”).

The Grizzlies weren’t afraid to get psychological, either. In fact, motivation was the final prong of their approach to keeping the team chomping at the bit. “Everybody was just so hungry to play,” said Xavier Tillman. “Speaking for myself, seeing all the other teams playing and getting opportunities to get comfortable and get a feel …I’m just sitting at home itching to play.” After winning five games straight, it’s clear that the team is itching to get back out to the court. “The reset button is nowhere, ” said Morant. “That thought is not in our minds at all.”

Outwardly, Jenkins appraises the success of the team’s execution over the break on a wealth of preparation. ““As we prepared for the season, even before training camp, [we were] talking about the what-ifs. Obviously controlling what we can control every single day was a big motto of ours as of team, but understanding when a curveball gets thrown, something that’s unforeseen, how we were going to handle it, developing a process, our line of communication, and at the core of it understanding what can we and can’t we do…we had all these dialogues even before the season started, so it’s pretty much internally been a confidence booster knowing we put all this work in.”

Yet, it’s worth looking around Jenkins’ humility to observe that he’s uniquely positioned to take on a challenge the likes of which have never been seen before. Not only is he one of the most intelligent coaches out there–a degree from the University of Pennsylvania should be enough to back that up, but his lack of head coaching experience affords him a subtle advantage. Given that he’s only spent one season in the position, he’s had no time to become settled in his ways, allowing him to employ his wit to tackle the challenges of the pandemic with innovation and efficiency. Combine this sense of creativity with Jenkins’ analytical mind, and you’re staring at the ideal coach to guide one’s ship through weeks of postponements. As the Grizzlies take on the San Antonio Spurs tonight, don’t be surprised if the team comes back from the break looking as lethal as ever.

Lakers Face Their First Challenge This Season
Why Load Management Worked For Kawhi In Toronto, But Not In L.A.