Thairo Estrada is the New and Improved Ronald Torreyes 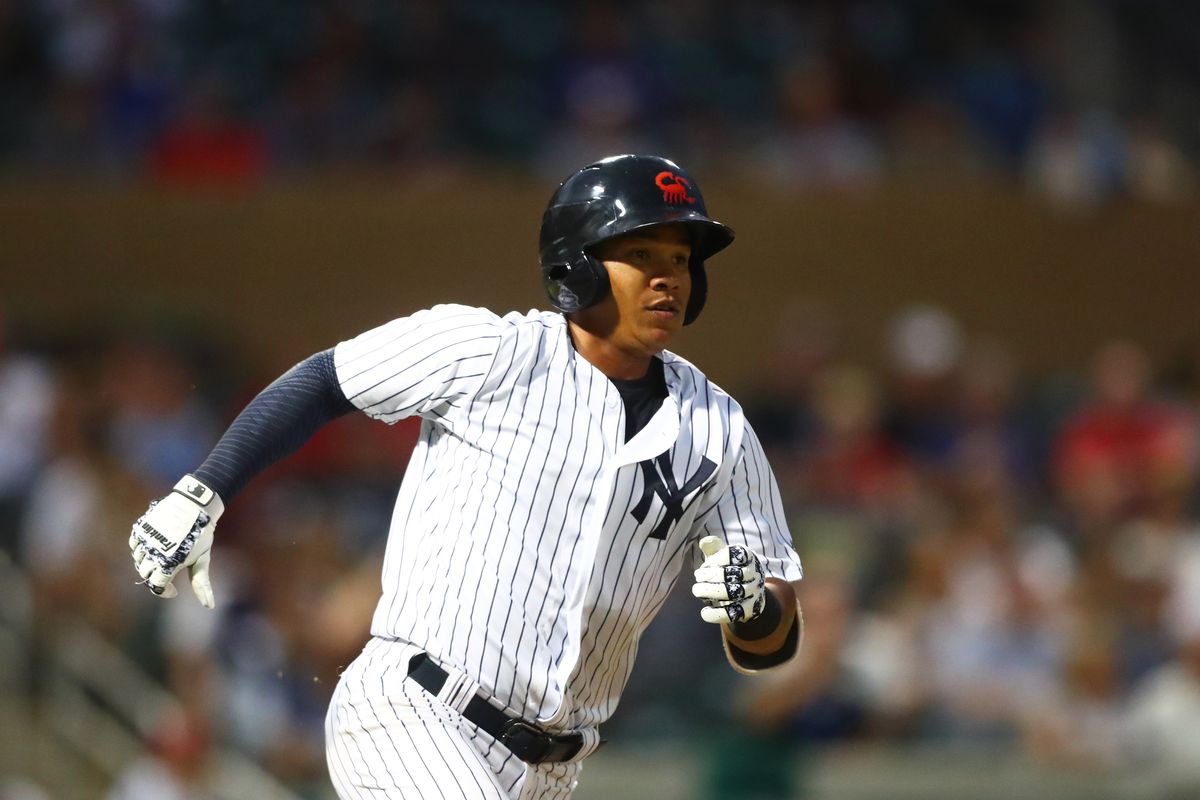 Disclaimer: There is a key at the bottom of the article for unspecified stats and acronyms. Some of the stats used can be quite advanced, so please check the list beforehand. Also, these stats were taken on June 2nd.

Ronald Torreyes stands a mere 5’ 8’’, but his tenure for the Yankees looms large. Not only did Torreyes constantly bring a smile to the faces of Yankee fans, he also filled in the backup-turned starter role quite nicely. Torreyes was far from being one of the better players during his time with the Yankees, but his contribution on and off the field should always be remembered.

Torreyes was signed out of Venezuela at 17 years old in 2010. He was a journeyman minor leaguer as he bounded through the Reds, Cubs, Astros, and Blue Jays organization until he made his debut with the Dodgers in 2015. A brief cup of coffee later, Torreyes was once again DFA’d, and ended up with the Yankees. Then the Yankees DFA’d him, only to later claim him back off waivers from the Angels. Torreyes went through a long, harsh road in the minors, and made the most of his time with the Yankees in 2017.

At the start of the 2017 season, Didi Gregorius was injured because of a strained right shoulder. Enter Ronald Torreyes. Torreyes impressed as a solid backup player in his Yankee debut in 2016. His unique ability to make contact as shown by his BB% and K% (6.0 % and 11.9% respectively) made him a bit of a useful oddity in the Yankees patient, somewhat strikeout prone lineup. In addition, his speed (sprint speed of 28.3 ft/s), anddefense (UZR/150 of 0.3, 5.5, 4.7 at second, short, and third respectively during his Yankee career) made him a useful late inning replacement. Furthermore, Torreyes racked up a decent 0.6 WAR during his first season with the Yanks. In 2017, Torreyes had career highs in nearly every offensive category; the most notable are his .292 BA, 35 runs scored, and 36 RBI.

Torreyes was an integral part of the 2017 “Never Say Die” attitude. The 2017 Yankees were underdogs after selling off Andrew Miller, Brian McCann, and Carlos Beltran as well as losing Alex Rodriguez to retirement. In the beginning of the season, injuries to Didi Gregorius and Gary Sánchez made it a lot harder to fathom a 2017 playoff run. However, magical seasons from Aaron Judge and Luis Severino paved the way to success. Meanwhile, Torreyes and Romine held down the fort until their respective reinforcements (Gregorius and Romine) returned. Torreyes and the Yankees in every way embodied the little engine that could. Everyone doubted the 2017 Yankees, but they kept chugging along. If one player went down, another would take his place, and keep the engine going. Nobody ever thought that they would make it to Game 7 of ALCS against the Astros to begin the year, but they did thanks to players like Ronald Torreyes.

The Yankees were a fun team to watch on the field, but they were just as fun off the field. As you probably guessed, Torreyes was especially part of the later. One night when Starlin Castro homered, Torreyes grabbed a Gatorade cup container to “interview” Castro about his four-bagger. Torreyes’ antics were an instant success, and whenever he had the opportunity, he “interviewed” players about their homers. It was dubbed “The Toe-Night Show”. In addition to swapping jerseys with Aaron Judge, and hitting a walk-off single against the Rangers Torreyes became a fan favorite. He even starred in a 2018 YES commercial where he dropped absolute tanks over the fence, helped the 6’ 6’’ Stanton open a pickle jar, and carried more bags than the 282-behometh, Aaron Judge. What backup player has his own commercial, especially with the Yankees? Ronald Torreyes, that’s who!

Unfortunately, with the emergence of Torres, and Andújar as well as Torreyes’ limited offensive ceiling, Torreyes was not an integral part of the 2018 Yankees. After the season ended, Torreyes was DFA’d and claimed off waivers by the Angels, thus ending his Yankee career. A few more DFAs later, Torreyes was signed by the Twins…and now currently sits in Triple-A; a sad outcome for the man who was so beloved in the Bronx.

So in what way does Torreyes compare to Thairo Estrada? Well they actually have a lot in common. They are both from Venezuela, both are very small major leaguers (Estrada is 5’ 10’’), and both weigh about the same (Estrada weighs 155 pounds and Torreyes weighs 151 pounds). In addition, the duo primarily played the infield, and hardly spent time the outfield at any professional (Estrada played 10.0 innings of outfield, while Torreyes played a mere 5.0 innings of outfield at the highest level). Even statistically, the two have above average speed (Estrada’s Sprint Speed: 27.3 ft/s, Torreyes: 28.3 ft/s), low BB% (Estrada: 6.0%, Torreyes (2016): 6.0%), and above average defensive middle infielders in at least one position (Estrada UZR/150 at 2B: 2.1, Torreyes (Yankee career) UZR/150 at SS and 3B: 5.5, 4.7).

However, one of the more fascinating reasons why they are so similar is that they were both a part of “Never Say Die” Yankee teams. The 2019 Yankees differ from the 2017 Yankees in that they are expected to make the playoffs, yet both had to overcome a lot of adversity. The Yankees at one point had 13 players on the I.L. The 2019 Yankees have players such as Gio Urshela, Domingo Germán, Tommy Kahnle, and Clint Frazier to step up. To add on, Sánchez returns to his 2016-2017 form, Zack Britton proves why he is still a top reliever, Luke Voit shows that last year was not a fluke, and D.J. LeMahieu translates his skills to the Big Apple. That’s a lot to ask from a lot of people, and heck to be in first place too; saying the Yankees are resilient is an understatement. Estrada certainly fits the mold as well. In just 50 PA, Estrada has slash line of .304/.347/.545 with an OPS of .912. He also has 3 HR, 9 R, 11 RBIs, and 2 SB.

Torreyes was an underrated, unappreciated member of the Yankees (especially in 2017). He was a hard-nose player that always put the ball in play, and contributed when the Yankees needed him the most. Yankee fans and baseball fans everywhere should always remember his contributions on and off the field. However, Thairo Estrada is just in his first major league season, and his offensive ceiling can certainly keep growing. As a result, despite having a bunch of similarities, Thairo Estrada is the new and improved version of Ronald Torreyes, and Yankee fans everywhere should embrace him with open arms.

DFA’d: Designated for Assignment. The respective club takes their player off the 40-man roster, and either send him to minors, trade him, or release him.

UZR/150: A defensive stat where having a number above 0 (replacement level) is considered above average.

Exit Velocity: How hard the ball is hit off the bat. MLB Average is 88.3 MPH.