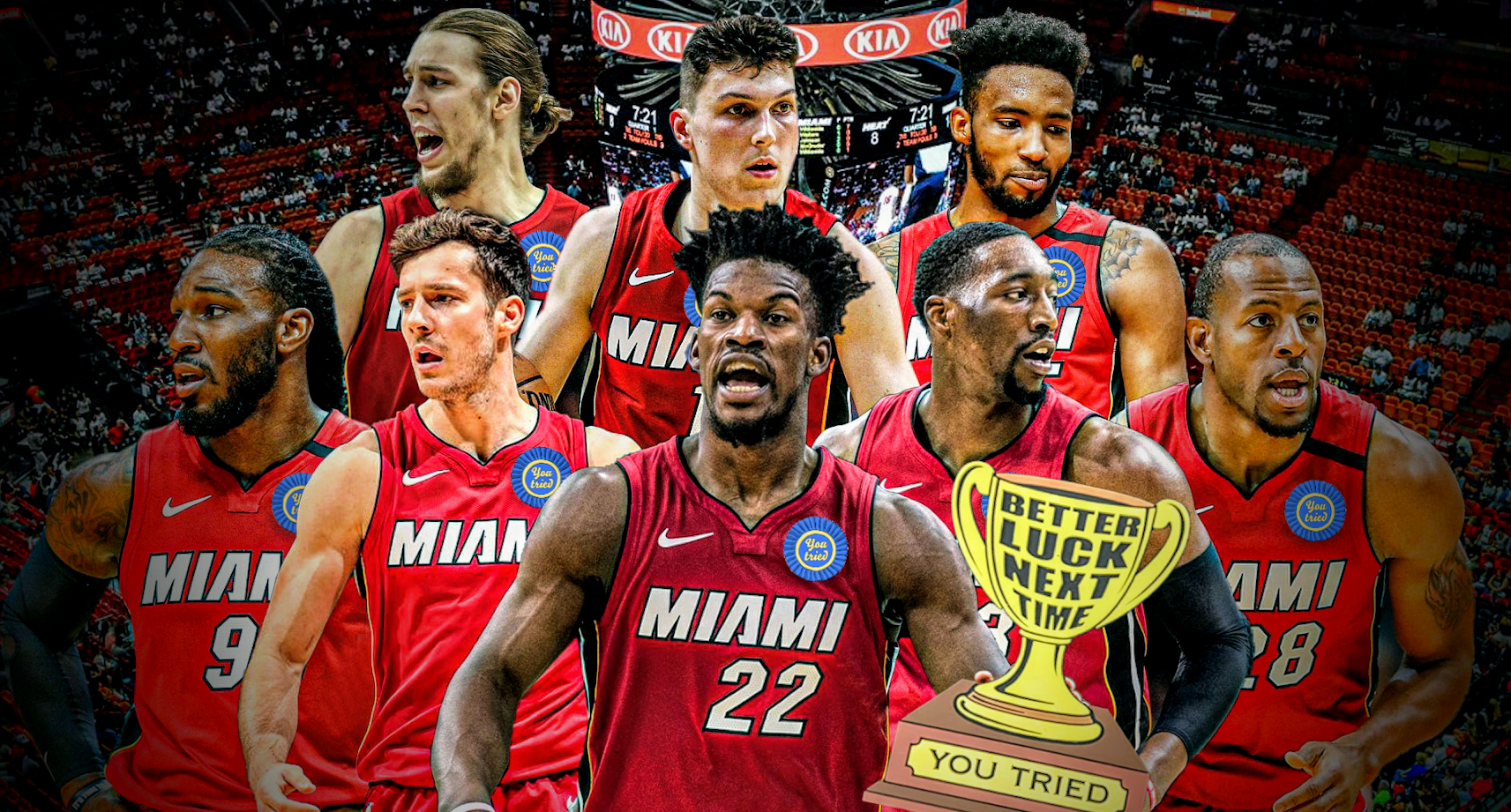 After burning through Indiana, Milwaukee, and Boston, the Miami Heat have proven to be nothing more than a pile of ashes and participation ribbons halfway into the NBA Finals dustpan ... and Anthony Davis and LeBron James have a firm grip on the broom.

Have the Boston Celtics left the bubble yet?

Can someone run and check? Please?

After tearing through the Indiana Pacers in four, the Milwaukee Bucks in five, and the Boston Celtics in six, the Miami Heat are simply a heap of ashes halfway into the dustpan of an asterisked NBA Finals.

People are asking if they can slow down or sidebar the Presidential election when one of the candidates gets sick – how about we do that with the NBA Finals? Bring in a team that can actually compete?

The Heat need to watch Bernard Goldberg’s phenomenal report on trophy culture on HBO to find out that just showing up isn’t really worthy of all the praise and adulation heaped on the team just before the NBA Finals. “A trophy puts in his head that whatever he did was good enough, even when it clearly wasn’t. That’s not how the real world works,” notes San Diego State University professor Jean Twenge in the piece.

Tell that to the Miami Heat, who are the Miami Tepid at best and we may hear ‘they haven’t played their best basketball in the first two games.’

The 62-39 run that the Los Angeles Lakers put on the Heat through the second and third quarters of Game One wasn’t just a case of ‘not playing their best basketball’ – it was load management to the nth degree for the Heat.

It’s what pushed them out of this entire series in a matter of 20 minutes of malaise. And that was with everyone healthy. It was like watching LeBron James and Anthony Davis kicking Heat players into the pit in what looked like a ‘300’ sequel.

Game Two was already hashtagged #Doubtful by this writer when it was learned that Goran Dragic and Bam Adebayo would be out. Not only was I right – a blind man would have been – but now the Heat have to win four of the next five to be anything other than also-rans.

Granted, Adebayo – who looks like he could be one of Dwight Howard’s illegitimate children (check out those cheekbones) – claims he will be back for Game Three, how will that help the Heat, who seem lethargic at best?

If Adebayo can come back and do to L.A. what he did to Boston, then maybe the Heat have a chance. But it has to be predicated on defense, something that Adebayo said was all about communication.

“This is a series where you’ve got to guard your yard,” Adebayo said during the series with the Celtics. “Sixty points in the paint is not guarding our yard. We’re going to get back in the gym and figure this out.”

They’ve lost that in the Finals against L.A. – maybe it got packed in the Celtics’ luggage.

But, to survive this series, the Heat need to start focusing on creating a more staunch defense with who they have in the building – you might recall, a team that was supposedly so deep that L.A.’s two stars were in trouble.

But where are these kids, these unlikely Herro’s who were not only the future for Miami, but basically a second team that could run with 29 other first teams on any given night?

Since I invoked his name, what about Tyler Herro? The rookie who averaged 13.5 points, 4.1 rebounds and 2.2 assists through 55 games in the season has 16.4 a game through the playoffs, including a 37 point outburst against the Celtics in Game Four of the Eastern Conference Finals.

And Kendrick Nunn, who was a stud for the Heat before COVID-19 interrupted the season, and impacted Nunn personally. Nunn came down with the virus earlier this year, and told SI.com’s Shandel Richardson back in July that he felt fine and was ready to become a regular contributor. But his numbers fell off from 15.5 points per game through 67 contests to 5.5 points, no starts, and only about 13 minutes of action.

Where is Duncan Robinson?

Dude exploded in the rounds against Indiana, Milwaukee, and Boston, putting Division III school respect back in the conversation. After averaging 13.5 points per game in the regular season, D-Bo moved into a starting role in the playoffs and became an immediate outside threat. In two games against the Lakers, he might as well be that young ball boy I remember as Monica Spoelstra’s little brother in Portland, Oregon. Robinson has only mustered nine points over two games in 48 minutes as a starter against L.A.

And then there’s Jimmy Butler.

I was actually rooting for this dysfunctional teammate, who couldn’t find his niche in Chicago, Minnesota, or Philadelphia. Yet with the Heat, he’s made it to the pinnacle of his sport … ‘almost.’

The Heat’s own website is purporting Butler ‘almost’ having a triple double last night – I ‘almost’ won the multimillion dollar lottery last night, too. If I’d have just bought a ticket – but I was thisclose.

You can’t get to the NBA Finals and point out what you think are moral victories.

Yay, they beat the Celtics. Big deal. The sun shines on a dog’s ass once in a while.

‘Almost’ doesn’t count, except in horseshoes, hand grenades, and sex, we all know that.

So far the only ringer has been Anthony Davis, LeBron James is blowing ish up from every angle as the team’s motivational and inspirational leader, and fans outside of L.A. are simply getting f(udg)ed … and right now the ‘Heat’ are about as useful as a warm washrag, if even that useful.

Forget ‘almost’ as a catch phrase through these first two games and start focusing on ‘if necessary.’ If the Heat don’t wake up, this is over as soon as Tuesday night.

Remember, If you’re not the lead dog in the race, the view never changes.

Did Erik Spoelstra work his ass off going from the aforementioned pre-teen ball boy with the Portland Trailblazers to winning a title with LeBron James on his roster to proving he can’t win another one without him?

It all seems kind of empty and purposeless – like playing in a gym with no fans, no home court advantage.

Even if it is just Davis and James, those two gentleman have something Miami seems to have lost – drive, determination, pride, grit and a fervor for being an NBA Champion. Something the Miami Heat don’t have right now.

They’re too busy patting sweat beads off with their participation ribbons at this point.

Easy logic would be to shut one or both of the L.A. stars down and make the rest of the team honest. Make them beat you.

On paper, that’s laughable. Anthony Davis, LeBron James, and a bunch of also-rans and neer-do-wells.

As I mentioned in a previous piece, there is a lot of jewelry on the fingers of Lakers players already.

Experience. James. Rondo. McGee. Cook. Green. A couple of multiples in there.

For Howard, it’s two games away, something that has eluded him his entire career, including a previous stint with L.A. Coattails, but he’ll take it – he’s rejuvenated, at 17 minutes a night and 6.8 points.

Dudley is truly along for the ride on James’ shoulders, with his 4.1 minutes played and zero points – but he’ll get a ring.

People will do what you allow them to do … even and especially winning championships.

Quicker, if you just stand by and watch like the Miami Heat has been doing on Thursday and Saturday night.

They have ‘home court’ advantage the next two games. It’s a mental thing, not a true home court by location. Home state advantage hasn’t worked thus far. Let’s hope they utilize whatever advantage they can find and that they make this a series.

Otherwise, basketball is over and we’re shifting to Major League Baseball and who’s going to its bubble in Arlington, Texas.