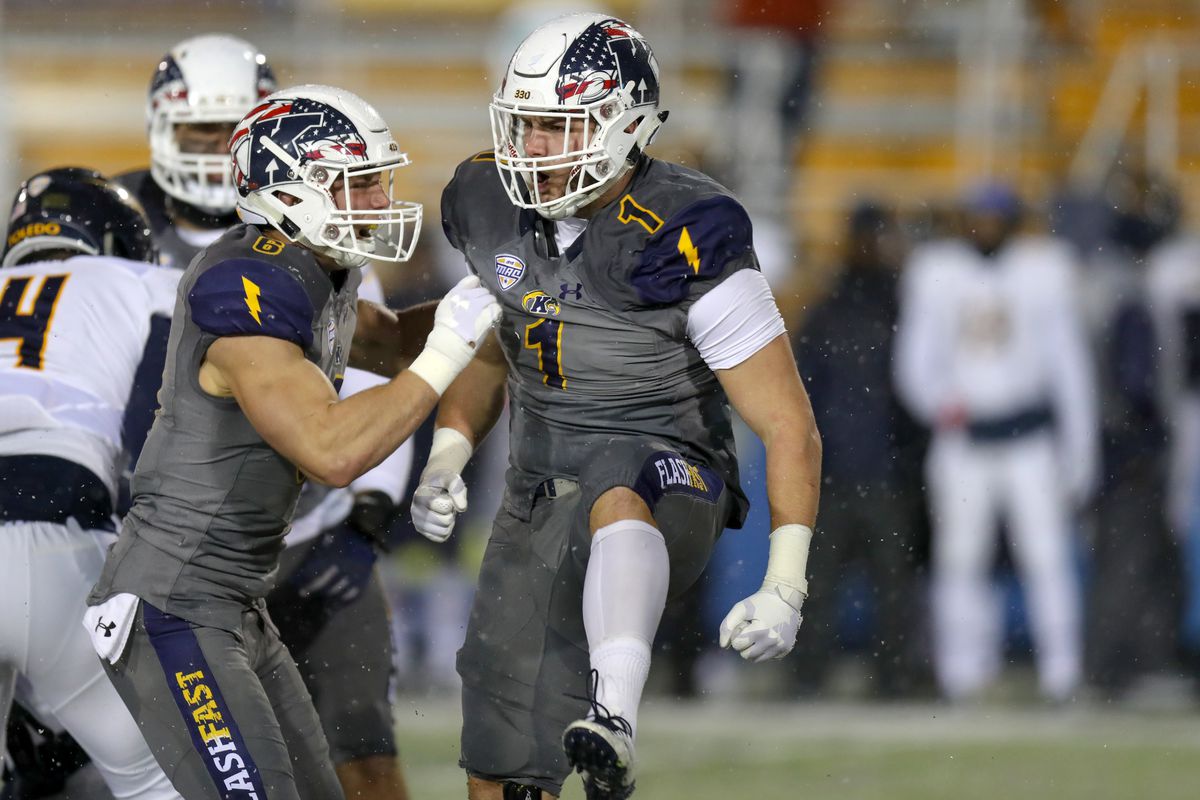 On Tuesday Night at 8:00 PM Eastern Time, with very few fans in attendance, if any, Akron and Kent State will battle it out at Dix Stadium in Kent State, for the Wagon Wheel. Kent State versus Akron is one of the NCAA’s most underrated rivalries. Located just 10 miles apart, these two teams meet in all college athletics, but it’s especially different in football, where the two go at it for the Wagon Wheel, the trophy that is given to the winner. The trophy is indeed a wheel from a horse-drawn wagon painted blue and gold, both teams colors. The first “Battle for the Wagon Wheel” took place in 1946, after the rivalry renewed after World War II.

Akron joined the Mid-American Conference in 1992, and since then the rivalry has been played every year. Through the 2019 game, the Wagon-Wheel series is tied 24-24-1. However Akron does lead the overall series with a 35-25-2 record. The first time the schools played was in 1923, where Akron beat Kent State 32-0. The two teams did not meet again until 1928, and played annually from 1928-1936. From 1932-1935 both teams were members of the Ohio Athletic Conference. During that time period, Akron won all meetings except for a scoreless tie in 1932. Kent State finally notched their first win in the series in a 23-6 victory in 1942.

After 1942, the series was obviously interrupted by World War II. The two teams met when they could through 1991, when the last interruption occurred. Since 1992, the series has been played every single year.

In 1997 Akron started a streak against the Golden Flashes. The Zips would win six in a row and 11 of 13 after 1997. Kent’s only wins during that time were in 2003 when Kent was led by future NFL Player Joshua Cribbs. That year they won 41-38. The only other win in that time period came in 2006, when the Flashes overcame the Zips for a 37-15 victory at Dix Stadium. Since then the series has remained tied through 2019.

In 2011, the two schools started the Wagon Wheel Challenge, where they would count all wins and losses in sports they both compete in head to head. In 2011 it started with 15 teams, but was reduced to 14 from 2015-2019 after Akron eliminated their baseball program. Following the reinstatement of the baseball program and the addition of Women’s Lacrosse at Akron in 2019, the challenge now includes 16 sports.

The basketball rivalry is much more well-known, after Bleacher Report published an article in 2009 titled, Kent State vs Akron: The Most Underrated Rivalry in College Basketball. Feel free to take a look at that article here. However, we are not in basketball season quite yet, it’s still football time ( I will write another article about the basketball rivalry when it renews on December 19th 2020).

Both of these teams come into Tuesday night’s match-up at different ends of the spectrum. Kent State, who is coming off their first bowl win in program history last year, is 2-0 and handling their MAC opponents fairly easily. The Flashes are averaging 44.5 points per game and 549 total yards per game. Now for Akron, the outlook is much different. Under second-year head coach Tom Arth the Zips have started poorly with losses to Ohio University and a 58-13 whipping at the hands of Western Michigan. Akron is averaging under 12 points per game and 345.5 yards per game, all while giving up 395.5 yards per game. However, as everyone knows, in rivalry games, you can throw everything before out the window.

In a game that will be televised on ESPN at 8 PM Tuesday Night, you should expect a pretty even first half, with Kent controlling the ball in the second half, leading them to a 38-24 victory over the Zips, and the privilege of keeping the Wagon Wheel in Kent, after winning last year 26-3 over the Zips.

Even if you can’t attend, just tune into ESPN at 8 o’clock tomorrow night and watch one of college football’s best small school rivalries. Also keep your eye on Kent State Head Coach Sean Lewis. He is in his third year at Kent, while still only being 34 years old. In 2018 he took over a terrible Flashes team and went a putrid 2-10 (1-7 In MAC Play). However last year in his second year he guided the Flashes to a 7-6 record and a second place finish in the MAC East. That Kent team, as stated above, went on to beat future Packer draft pick, Jordan Love and his Utah State Aggies 51-41 in the Frisco Bowl, giving the Flashes their first ever bowl win.

Coach Lewis is a young up-and-comer in the college football world. Look for him to guide Kent to another winning record this year, with a hopeful bowl bid. He is already on many team’s radars when it comes to hiring a new head coach. Will Coach Lewis get the nod at Michigan when Harbaugh is fired (Hypothetically)? Obviously not, but just be on the lookout for his name as it starts to pop up this off season.

Final Prediction: Kent State 38 Akron 24: NFL Prospect and Kent State quarterback Dustin Crum has his best game of the season, going 14-16 for 200 yards and two touchdowns. Bryan Bradford has an excellent night on the ground, rushing 16 times for 108 yards and a touchdown. Finally Isaiah McKoy joins in on the fun, catching six passes for 92 yards and one score.

Other Notable MACtion Games This Week: