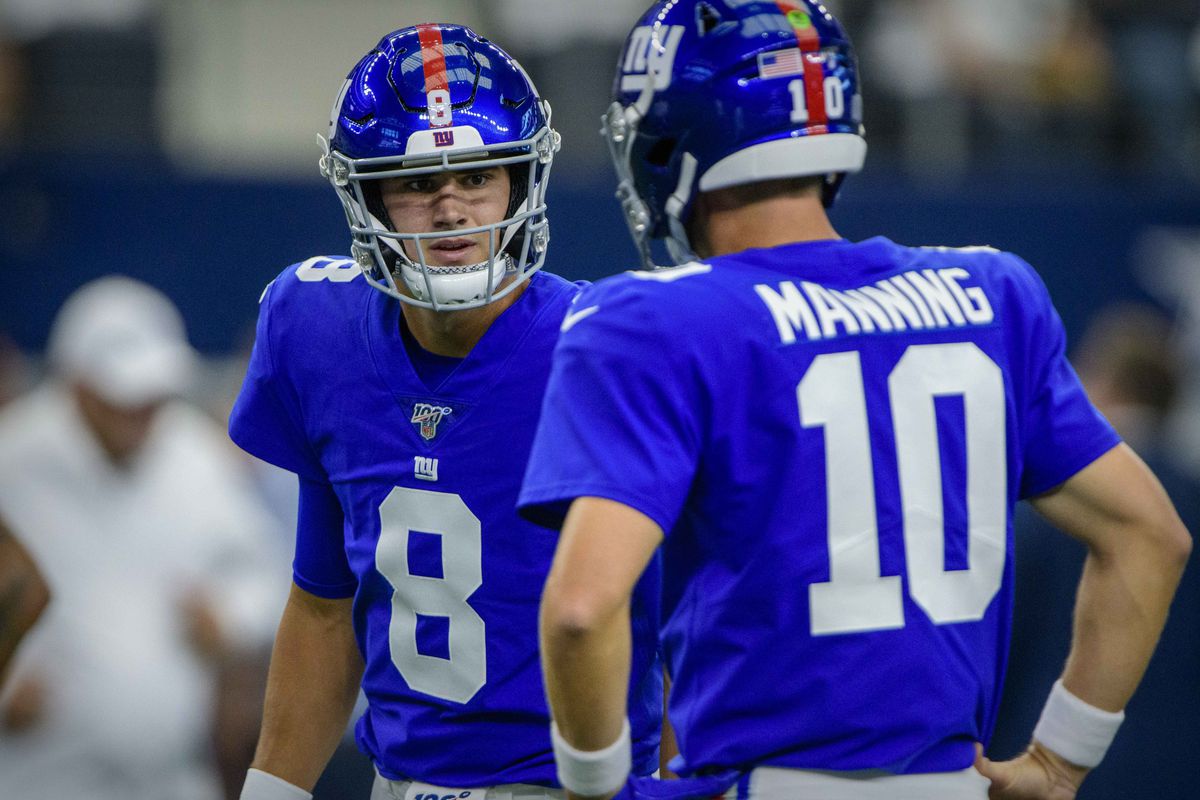 Legend- an extremely famous or notorious person, especially in a particular field. Eli Manning is exactly that when it comes to New York Giants Football. Legends never die and always cast a big shadow on those who come after them. It can be extremely difficult trying to fill the shoes of a legend. Daniel Jones is trying to do that in his 3rd year with the team.

Jones comes into this year having started 26 games for the Giants. His record sits at 8-18. This isn’t ideal for a first round pick, but lets not be so quick to jump on him. In Eli’s first year he went 1-6 with 9 interceptions. The following year he went 11-5, but through two season he was barely over .500 as a starter.

Year three for the “so called” franchise Quarterback is the make or break year. It is time for Daniel Jones to step up and lead this team to where they expect to be, and that is in the playoffs. He has no shortage of weapons and help around him. Saquon Barkley is returning from injury, and the additions of Kenny Golladay and Kyle Rudolph only sure up the receiving core even more.

Not only is Jones battling to keep his job and stay on track in his career, but he is also battling to get out of Eli’s shadow. Eli was so beloved and relied on for so many years that it can be hard for fans to just start doing the same for Jones.

Will it be easy to get out of the shadow of Eli Manning and start to gain the fans and the NFL’s attention as a legit quarterback in the league? It won’t, but Jones has the makeup and ability to do so. You don’t get drafted sixth overall if you’re not capable of taking over a franchise. We have seen so many great moments from him through two years that show us with a great team around him this can really work.

We can go back to his rookie season when he threw for 5 touchdowns and 352 yards in an overtime 41-35 win over the Redskins. He did this fresh off an ankle injury, too. Those are the types of games he is capable of having. Giants fan are expecting this level of performance on more of a consistent basis.

One of the main things Daniel Jones has on his side when it comes to getting out of Eli’s shadow is hope. There is so much hope surrounding this 2021 Giants team that if he delivers in a big way then he will be all alone in the spotlight. From going 4-12 two years ago and then 6-10 just last year, there has already been major strides within the organization. There is so much optimism for this team to take that next step into the playoffs and prove to the league they’re legit.

Following in a two time Super Bowl champ’s shoes is a difficult task. Also no one is asking Daniel Jones to be exactly like Eli because there games are not exactly the same. You can say Eli was a better passer, but Jones has the running ability that Eli never had. Jones’s athletic ability in this soon to be high powered offense has potential to be really special. We’re all rooting for Jones to take that very important next step in his career, and also out of Eli’s shadow. He has everything he needs to do so, and now only time will tell.