Dawg Pound Report: The Browns Finally Play in Nice Weather as they Survive a Late Surge from the Jaguars to Win this AFC Match-Up 27-25 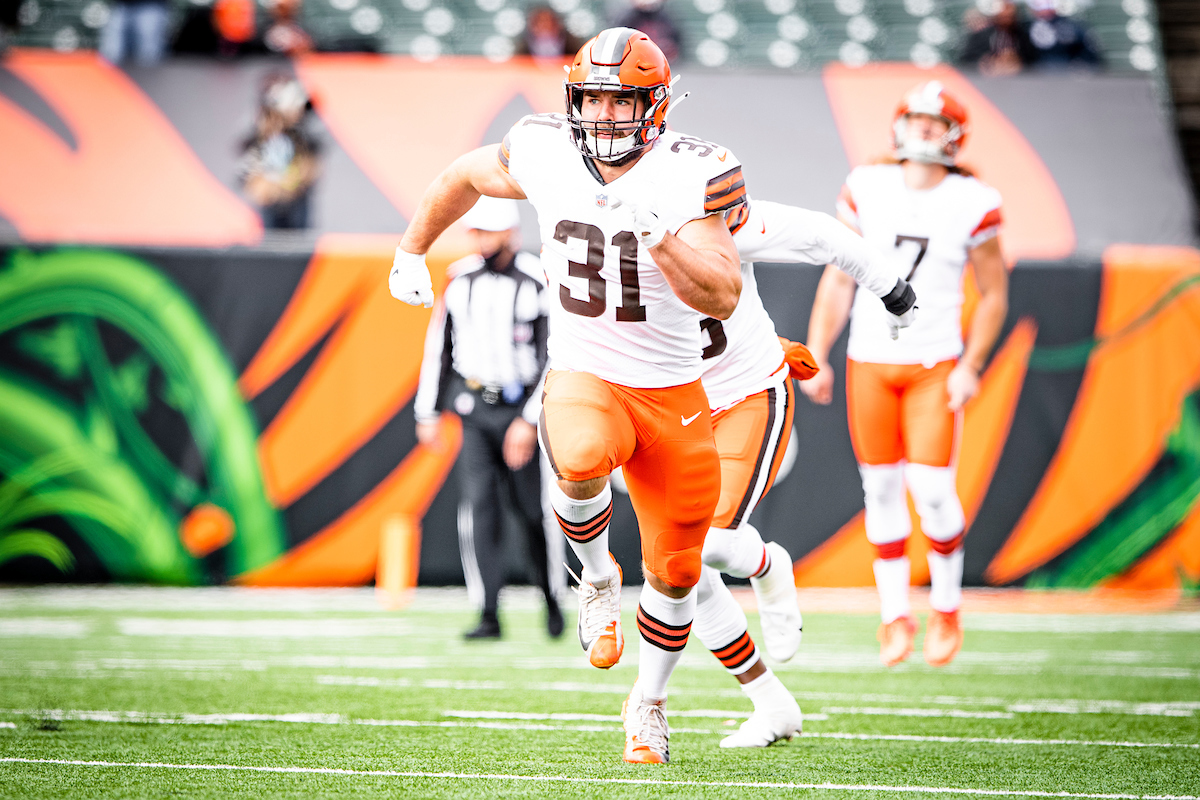 It sure was odd to see the Browns take the field in sunny Jacksonville on Sunday. Many players in warm-ups even took their shirts off to bask in the nice, sunny weather. The last three times we’ve seen the Browns play, wins versus the Eagles and Texans, and a loss to the Raiders, the field has been slick with ice or rainfall, and the players were all bundled up around the heaters on the sideline. Yesterday could not have been more different as the Browns continued their winning ways to beat a struggling Jacksonville Jaguars team that was starting Mike Glennon at quarterback. In the beautiful Jacksonville sunshine, this game went back and forth until the bitter end, where the Browns made they stops they needed to make to pull out a victory. Let’s hop right into our review of the game!

On both teams first possessions, the offense looked promising, but eventually stalled, forcing a punt from both Jacksonville and Cleveland. Jacksonville started with the ball after the Browns deferred to the second half. On their second possession, the Jags positioned themselves in field goal range, after leaning on James Robinson to pick up yards. On third and 14 from the Cleveland 44, Glennon completed an eight yard strike to receiver Tyler Eifert, which left them short of the first down, so they called upon practice squad call-up kicker Aldrick Rosas to hit a 54-yard field goal to take the lead 3-0 over the Browns. On the ensuing Browns possession, they made quick work of the Jags defense, and a 5 yard pass from Mayfield to Landry, put the Browns ahead 7-3. On the next Jaguars possession they were once again forced to settle for a 24-yard field goal by Rosas to keep the score close 7-6.

After the Jaguars hit the 24-yard field goal, the Browns went on a long 14-play drive, in which they stalled and settled for a field goal by Cody Parkey. Parkey nailed the 24-yard field goal, to extend the Browns lead to 10-6. On the next Jaguars possession, Mike Glennon looked like Patrick Mahomes, guiding the Jaguars down the field fora touchdown. On 1st & 10 from the Cleveland 46, Glennon threw a strike to Collin Johnson who took it to the house, giving the Jaguars the lead again 13-10. With four minutes to go in the half, the Browns needed to score quickly to stay in this game. Move quickly, they did, as Baker guided the Browns on an eight play, 84-yard drive that ended with Mayfield throwing his second touchdown pass of the day, to tight end Austin Hooper for a score. With a minute to go in the first half the Browns led 17-13. The Jaguars did get into field goal range before the first half, but Rosas missed the 54-yard try to go into halftime, losing to the Browns 17-13.

On the first play of the third quarter, Baker Mayfield hit rookie tight end Harrison Bryant for a first down, but he fumbles and the ball is recovered by the Jaguars. They took full advantage of that turnover, and went down to score on a Eifert catch from Glennon. They went for the two-point conversion, but failed, still leading the Browns 19-17. On the ensuing drive, the Browns leaned on Chubb to get them into field goal range, where Cody Parkey connected from 45-yards to give the Browns a one point lead, 20-19. On the ensuing Jaguars drive they moved the ball down the field with ease, only to end with a punt from Cooke, who pinned the Browns inside their own five on his punt. Up 20-19 still, the Browns knew they had to score at least one more time. On the third play of the fourth quarter, Chubb struck pay-dirt on a one yard touchdown run. The Browns now led 27-19.

In their opening drive of the fourth, the Jags looked promising, but eventually punted the ball back to the Browns. However, once again Cooke hit this ball perfectly, as he pinned Cleveland inside their own two yard line. After a long 10-play drive, they Browns faced a fourth and inches on the Jacksonville 22. Instead of electing to kick the field goal to push the lead past three, they went for it, with Kareem Hunt getting stuffed outside the tackle box for no gain, and a turnover on downs. With 5:30 to play the Jaguars marched down to the Browns 4 yard line, and on third and two the Jaguars and Mike Glennon hit James Robinson for a four yard touchdown pass, leaving the Jaguars down two points. Obviously, the Jaguars went for two, but failed on a Glennon pass to Johnson, preserving Cleveland’s lead of 27-25. The Browns used their run game to melt the clock, and when the Jaguars ran out of timeouts, Baker and the Browns entered victory formation, and kneeled out a 27-25 win.

Nick Chubb, CLE RB: Carried the ball 19 times for 144 yards and one score.

James Robinson, JAX RB: 22 carries for 128 yards and one touchdown.

Jarvis Landry, CLE WR: 8 Catches for 143 yards and one touchdown.

Next Week: Next week the Browns travel to Nashville to take on the Titans in a huge game for playoff positioning. Jacksonville travels to Minnesota, looking to snap this ten game slide.

Be sure to check back later for press conferences and player reactions!

Browns Vs Jaguars Second Half Live Blog!
RECORD NUMBER OF NFL PLAYERS RAISE AWARENESS THROUGH MY CAUSE MY CLEATS