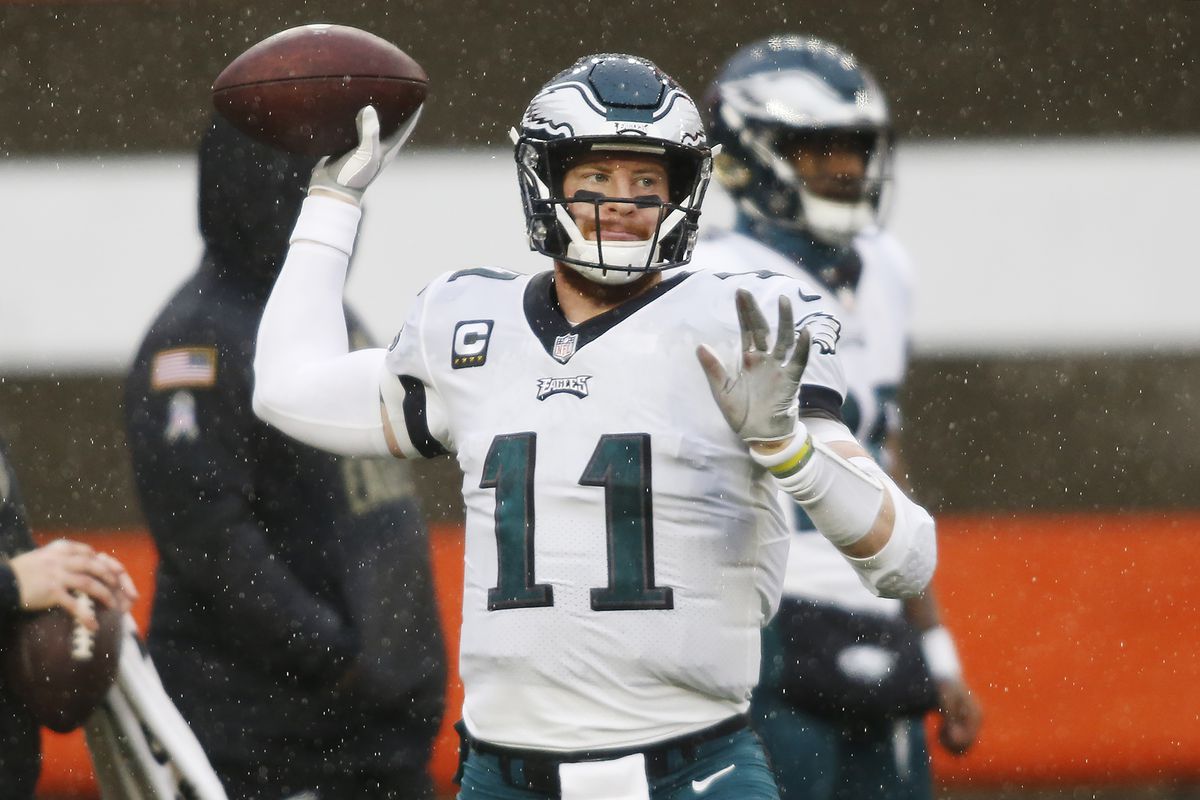 It’s been a wild couple of weeks for the Philadelphia Eagles and Carson Wentz. A storm of misinformation, leaks and all kinds of offers and counteroffers for the potential Carson Wentz trade has dominated the airwaves in Philly. Let’s try to break it all down.

Football media begins to announce that Carson Wentz is officially on the trade block. A few teams reportedly called in on Wentz quickly, the two most prominent names being the Chicago Bears and the Indianapolis Colts. Trade talks seemed to progress rapidly from there. This caused speculation from a decent number of outlets that a deal could happen before the Super Bowl. There was (and to this date hasn’t been) any official word from Wentz or his camp about a trade request. Or anything from Wentz at all positive or negative. There were a few reports that the Eagles are seeking a similar compensation package to what the Lions got for Matthew Stafford, the two first round picks being key. One reporter stated that the Bears were interested in that type of deal. However that didn’t seem realistic. Most reports agree that the Eagles are seeking one 1st round pick.

Then it’s reported a deal with the Bears is near done. The speculated trade was Nick Foles, Tarik Cohen and a first round pick. Soon after Cohen himself put those rumors to bed. Cohen said on twitter that he talked to Bears GM Ryan Pace and he implied that he was not going anywhere. Cohen later deleted the tweet but the rumored trade did die out. Still though, on February 6th Adam Schefter reported a deal would be coming soon. Whether that will become true or not, the Super Bowl came and went without a deal.

After the Super Bowl the rumor mill started up again. Eliot Shorr-Parks said the likely price for Wentz was still a first rounder on February 9th. Stephen Holder said that the Colts still had heavy interest in Wentz but the initial Eagles asking price of two first rounders was too high. Dan Sileo said the Bears and Denver Broncos had submitted actual offers for Wentz. Benjamin Allbright added fuel to the fire, saying that the Bears, the San Francisco 49ers and the Houston Texans also made calls.  Around this time reports began to surface that Wentz and additional players like Zach Ertz would also be on the table.

Despite all the reports, Mike Garafolo said that there were “no indications right now a Carson Wentz trade is imminent.” The reason? Reports came out that the Eagles were simply asking too much. Michael Lombardi tweeted that the asking price was laughable and not worth considering. On the Eagles side, they felt like they hadn’t received a fair offer. The impasse reportedly made the Bears impatient and ready to pull out of the organizations.

What is Carson Wentz Worth?

The crux of the issue comes down to Wentz’s worth. Early on a first round pick seemed to be the minimum. The evaluation of the Eagles might’ve been higher, but most outlets were reporting at least one first was the standard for Wentz. As late as February 10th Daniel Jeremiah speculated at least a first and another pick. Recent news has begged to differ however.

The first tangible offer for Wentz came from the Colts, who offered two 2nd rounders and another mid round pick. Rob Maaddi then reported that he was told by another team’s official that the offer they sent was better than the Colts, but no details of that potential offer were revealed. Sources have since come out and said that the Eagles have not received any offers that contain a first round pick, especially without some further compensation by the Eagles.

Do the Eagles Need to Trade Wentz?

Amidst all the trade talks and trade drama, the fact is the Eagles as of right now are not “forced” to do anything. Wentz has not come out and asked to be traded, and Wentz has spoken to new head coach Nick Sirianni. Then again, he also hasn’t come out and said he wants to stay either. No matter what happens with Wentz, the Eagles will absorb a large portion of his salary. The lowest his dead cap hit can be this year if Wentz is not on the team is 33 million. Why would the Eagles pay 33 million for Wentz to play for someone else without decent compensation?

That being said, there is something of a deadline for this year to get rid of Wentz. If Wentz is traded before March 19th, he will cost the Eagles 33 million like I said before. However after that date, trading Wentz will cost the Eagles 43 million. It’s definitely in the Eagles best interest to get a deal done sooner rather than later if a deal is inevitable. Many reports have come that the relationship between the Eagles and Wentz is strained or irreparable. But the latest from Philly media is that the Eagles don’t feel forced to make a deal just yet. Is that a smokescreen to increase his value? Perhaps. It could also simply be the truth.

As I’ve written before I don’t think Wentz staying in Philly is in anyone’s best interest. Perhaps the Eagles are much more confident about the team that they currently have than I am, but this team seems pretty far from competing. Why bother keeping an unhappy Wentz around while simultaneously not figuring out what you have in 2nd round pick Jalen Hurts? That type of quarterback controversy benefits no one. Take whatever offer you can get before March 19th and cut your losses.

Alternatively, if the Eagles are simply trying to maximize value, waiting until after March 19th is an option. The Eagles being on the hook for Wentz 10 million roster bonus instead of the receiving team may tempt them to give up more in a deal. And honestly if 2021 is a lost cause what’s 10 million extra? It’ll be off the books by 2022 either way. One way or another, for everyone’s sake, Wentz needs to be dealt. Hopefully sooner rather than later.

The Mavericks are Picking Up the Pace
The Man To Man Podcast Episode VI: Early NFL Free Agency Edition