The Chargers Get Their First Win Of the Herbert Era 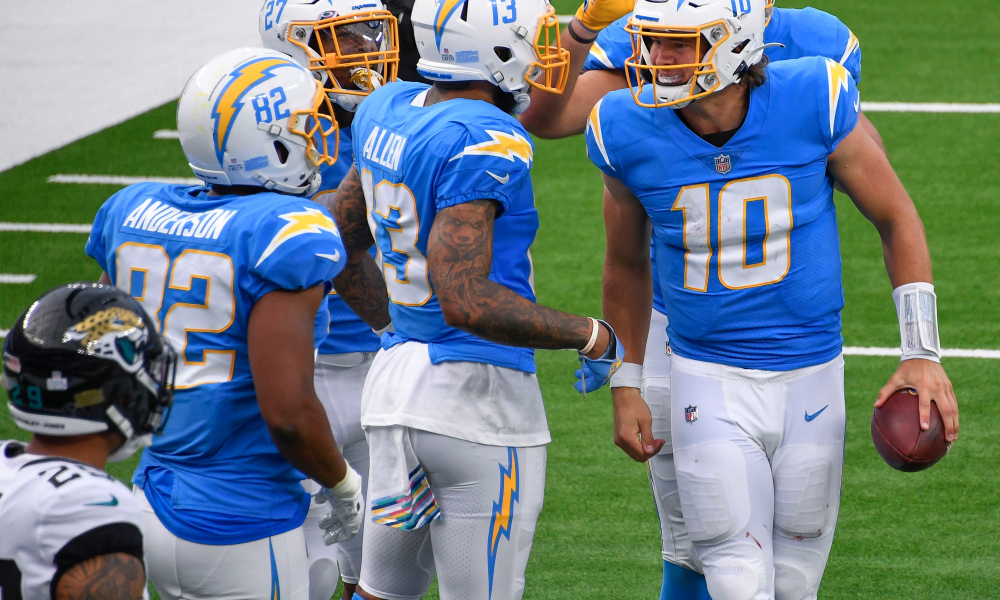 Justin Herbert had his first career NFL win this sunday in a 39-29 victory against the Jaguars. The sixth overall pick was nothing but spectacular once again. Herbert completed 27 of his 43 throws for 347 yards and three touchdowns, also adding 66 yards on the ground as well as a score.

Herbert joined Patrick Mahomes as the only players in NFL history with at least 250 passing yards in each of their first five career games.

This win has extra meaning to it due to the fact that the Chargers have come up short in each of the last four games. Relinquishing leads to the opposition and slowing down on offense/defense in key moments.

In spite of all of this, the Chargers still believe in themselves and the talent that is around. Herbert preached this during his postgame interview saying, “that locker room is tight… we’re not going to point fingers, we’re not going to blame each other, we’re going to stick together.”

From the looks of it, Herbert has the trust of everyone inside the locker room. Teammate Melvin Ingram had high praise for his rookie quarterback. “The kid is special. He’s always poised… right now the skys the limit for him and he’s going out and doing what he needs to do.”

In addition, the media asked Coach Lynn for his thoughts on his rookie saying, “He got his first victory today and I’m happy for him. But we needed that win as a team. I’m happy for the team. He was a major contributor today… He showed versatility with both his legs and his arm.”

In the past, Lynn had been critical of his rookie quarterback. Not giving him the praise and recognition that he deserved following terrific performances. Since naming Herbert as the starter, things have looked brighter for both Lynn and Herbert.

The mood for everybody is always better after a hard fought win.

Each of Herbert’s three touchdown passes were on the money. For a rookie quarterback, Herbert has shown poise inside pocket as well as extending plays with his legs. All resulting with accurate throws to receivers.

The first touchdown throw was to Donald Parham on a vertical route in the slot. Herbert threw the ball perfectly to Parham where only he was able to catch it over the linebacker and safety.

Herbert’s second score came to Virgil Green who injured himself on the catch. The rookie threw another dime over top of the linebacker in the end zone. However, Green rolled his ankle on his way down from the catch. Green would need assistance to leave the field.

Herbert continued to show off his chemistry with fellow rookie Jalen Guyton. The two connected for a 70 yard bomb late in the third quarter. It’s becoming a regular scene when these two hook up for deep balls.

Despite dominating on through the air, it was the ground game that turned heads. The Oregon product registered the longest run by a Chargers QB since 1988 with a 31 yard run. Not to mention his rushing touchdown in the fourth quarter deep in the Jags territory. Rolling out to his right and diving in for the score. Herbert truly won in a dominant performance.

The Chargers travel to Denver next week to face off against the struggling Broncos. Look for the Chargers to stay aggressive and go on a winning streak as they have a soft patch of opponents the next couple of weeks. If this team gets hot, they will be someone nobody wants to play against.

Daniel Jones Breaks the Internet, a Play in Three Acts
“Screw That, We’re Going to Win It.” In a Tale of Two Halves, Baker Mayfield was Feeling Dangerous Yesterday