The Emergence of Nick Richards 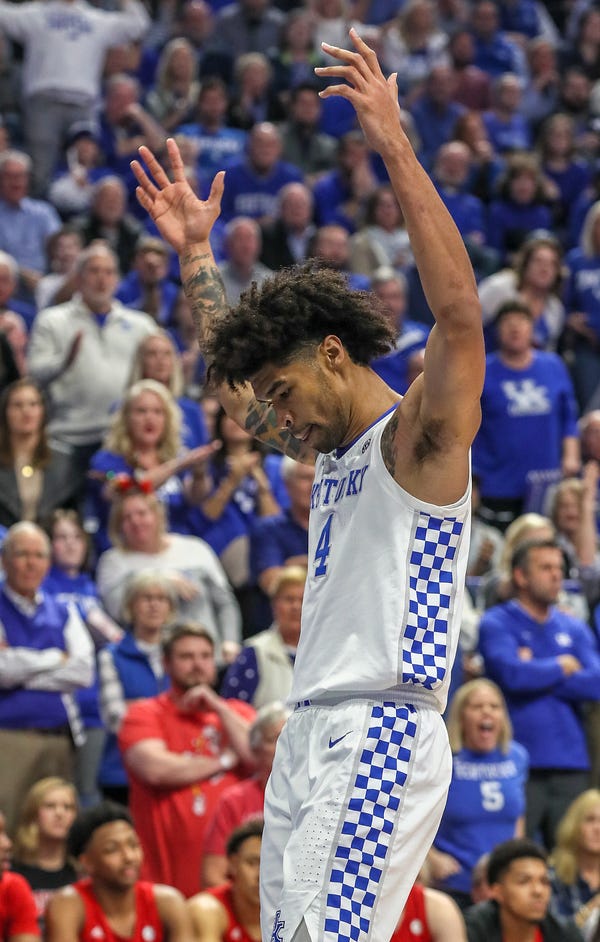 The University of Kentucky Wildcats have become well-known as the epicenter of all things one-and-done. Since John Calipari arrived in Lexington a decade ago, talented freshman like John Wall, Demarcus Cousins, Karl-Anthony Towns, Anthony Davis and dozens more have made short stints on campus the norm. Some may tell you that upperclassmen are a dying breed at Kentucky. While that may be true, Nick Richard’s meteoritic rise in his junior season has shown that the “old” guys can still be plenty good, too.

Richards, a 6’11” native of Kingston Jamaica didn’t start playing basketball until he was a teenager. He grew up playing soccer, which helps to explain his speed and stamina on the court. As a freshman and sophomore, his inexperience showed. He looked clumsy at times and struggled to take full advantage of his length. As a result, Richards failed to secure significant minutes and put up uninspiring per game averages in his first two years at Kentucky:

Prior to this season, Richards had shown potential as an efficient scorer and a good rim protector. His offensive ability, however, was pretty much limited to lob finishing. Many players may have entered the transfer portal after seeing their minutes decrease from their first year to the next. Nick Richards didn’t pack his bags and head for the hills when his development was slower than what has come to be expected at Kentucky. Instead, he took his came to a new level, perhaps the best player on this year’s team. Now, a little more than halfway through his junior season, Richards’ production is jumping off the stat sheet.

In this third college season, Richards has gone from clumsy around the rim to possessing a feathery touch. He’s gone from timid to ferocious. From expendable to irreplaceable. He’s seen his draft stock rise from nonexistent to knocking on the door of the lottery. Nick Richards has turned into the poster boy for late bloomers, and there’s a legitimate case to be made that he’s Kentucky’s most important player.

Ashton Hagans, Tyrese Maxey and Immanuel Quickley are certainly all talented Wildcats in their own right. The three are, however, all guards, combining to form a three headed monster in the backcourt. Richards has no such company in Kentucky’s frontcourt and is asked to carry a much larger load of responsibility. He’s the team’s best post defender, rebounder, and most efficient scorer. He’s also a 74.5% free throw shooter, which allows him to remain on the court for critical late game stretches.

At Kentucky there’s almost a perception that something is wrong with players when they’re not good enough to leave for the NBA after their freshman season. Big Blue Nation’s unreasonably high expectations for players doesn’t help. There’s a tendency to forget that these players are still 18, 19, or 20 years old. There is no single one path to success in basketball. There are rather, many, sometimes winding, roads. Richards bursting on to the scene as a junior goes to show that patience is a virtue.

Richards has provided a veteran presence for a very young team. His unexpected rise to stardom has more than offset the disappointing play, and ensuing decision to transfer, from five-star freshman Kahlil Whitney. Backcourt play may be what wins in March, but Kentucky’s backcourt can’t and won’t win it all without a big contribution in the frontcourt. Richards’ bounce, offensive rebounding and ability to run the court makes everyone around him better and makes title hopes a possibility for Kentucky.

Elite production at his age may be a rarity in the recent history of Kentucky, but Richards’ talent is on par with the other greats that came before him. The sky is the limit for this late bloomer and it truly is a feel-good story to see his dedication to his craft pay off. Kentucky fans, scouts, and the other forgotten upperclassmen of college basketball are on the edge of their seats to see what this “old” young man does next.