The Evolution of The Quarterback: 1960 & Before 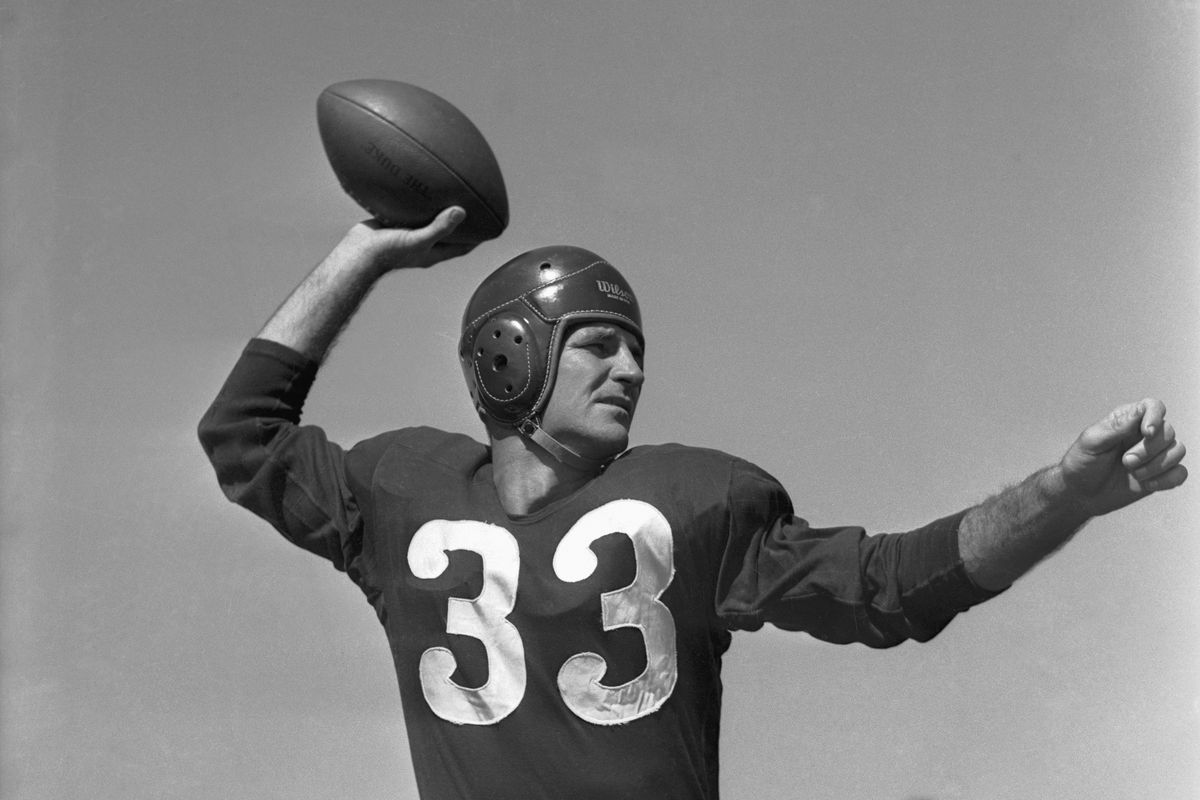 The first record of a completed pass goes all the way back to 1906. St. Louis quarterback Bradbury Robinson completed the first legal pass on September 5, 1906, when he tossed a 20 yard pass to Jack Schneider in a game versus Carroll College. His first attempt during the game fell incomplete, forcing a turnover on downs.

Football was first professionalized in 1892 when Pudge Heffelfinger and Ben Donnelly were paid a large portion of money to play for the Allegheny Athletic Association of the WPSIFC, or Western Pennsylvania Senior Independent Football Conference. In the 1890’s and early on in the 20th century, football was mostly a regional sport. Most leagues or circuits were based in one area or one state, as outside travel across state lines presented a problem at the time.

With what was going on in the world at the time, football was mostly uneventful during the years leading up to the 60’s. In 1946, after World War Two, the National Football League was struggling, especially after the American Football League came to be in the same year. The NFL hired Bert Bell to be the league’s commissioner, and his only stipulation was that NFL headquarters would be moved to Philadelphia. With this hire, the NFL was basically monopolizing the sport of football, and this continued to happen through most of the 1950’s.

By 1960, a group of wealthy men who would later be labeled as the Foolish Club, had become frustrated with their many attempts to buy an NFL franchise, but the NFL would not sell. These men who include Harry Wismer, Ralph Wilson, Lamar Hunt, and Bud Adams, decided to form their own league, the American Football League or AFL. It was the 8th professional league to be named the “AFL,” and it was the fourth league that was considered a major threat to the NFL. By the end of the 1960’s, the Foolish Club and their AFL would be the NFL’s most formidable competitor to date.

As we look further into the evolution of the quarterback, it’s important to note some of these great quarterbacks, who came before their time, but eventually revolutionized the game of football. Players like Sammy Baugh, Otto Graham, and Johnny Unitas would all change the way we look at football today.

Baugh is looked at as the most versatile quarterback ever, and the real pioneer of today’s NFL passing game. Oddly enough, Baugh started out as a halfback, but was later moved to quarterback. He used his strong arm to make viewers rethink their philosophies on football. Baugh was incredible during his time, he amassed over 21,850-passing yards in his career, while throwing 187 touchdowns. That is over 11.5 touchdowns per year, which is amazing when you compare it to other quarterbacks of Baugh’s time period. Baugh was truly incredibly versatile, during his first seven years in the NFL, he not only played quarterback, but he punted, and played defensive back as well. If you want to talk about a versatile quarterback, Baugh is truly a jack of all trades. In 1943 he led the NFL in passing, punting, and interceptions. Just an incredibly gifted athlete who was truly ahead of his game. After his career, Baugh went on to coach at Hardin-Simmons, the New York Titans, and the Houston Oilers.

Interesting Fact: Baugh’s college number 45 is one of the only retired numbers in all of college football. His number 45 is retired at his Alma mater, TCU.

Bob Waterfield is a name many people might not know. However, he was one of the best to do it before 1960. Waterfield attended UCLA to play football in 1941. During the 1942 Bruin’s season, Waterfield led the Pacific Coast Conference in passing, going 53-125 on the year, for over a thousand yards and 12 touchdowns. Waterfield also had a big leg on him. He punted for an average of 40 yards on 60 punts that season. On top of that, Waterfield broke a UCLA record by competing in 557 minutes of UCLA’s 600 minutes of game on the year.

Waterfield was a winner in the NFL right off the bat. He was drafted in the fifth round of the 1944 NFL Draft by the Cleveland Rams. He won the starting quarterback job as a rookie. As a rookie, he also guided the Rams to a 9-1 record and an NFL championship all in his rookie year. On Thanksgiving day of 1945, Waterfield was 12-21 throwing the rock, for an astonishing 329 yards. Jim Benton caught ten of Waterfield’s passes for what was an NFL record of 303 receiving yards. On December 16, 1945, Waterfield’s Rams Sammy Baugh’s Washington Redskins, 15-14. Multiple sports writers expressed how great Waterfield was, and how he literally won the championship game alone. He threw for two touchdown passes, for both the Rams’ scores. On top of that all of his punts pinned the Redskins deep in their own territory. Before the game, Rams owner Dan Reeves announced that Waterfield had just signed a three year $20,000 contract to stay with the Rams.

Interesting Fact: In 1943, Waterfield was sent to Fort Benning, Georgia for Officer Candidate School. He was commissioned as a Lieutenant, and played quarterback for Fort Benning’s 176th Infantry Football Team in 1943.

Otto Graham might be the best of the bunch from the 60’s and before. It also doesn’t hurt that he played for the writer of this article’s favorite team. Graham was spectacular in the beginning of his career. From 1946-1949, Graham led the Browns to a 47-4-3 record, and four championships in the All-American Football Conference.

The Browns moved to the NFL in 1950, and Graham had gotten even better before playing NFL teams. He was the type of leader who convinced his teammates they weren’t out-manned versus the bigger and stronger NFL teams. He ended up leading the Browns to three NFL titles, and they also played in three other championship games. Yes, that is ten championship births in a row. I told you this guy might be the best of his time! Over his career Graham completed over 55% of his passes for 23,580 yards, and 174 touchdowns to 135 interceptions. His final career record was 105-17-10, making him a certified winner.

Interesting Fact: Graham was sent to Colgate University after joining the Navy in 1944 as a trained airplane pilot. At Colgate, he played basketball and was named an All-American.

Before 1960, the NFL and AFL were two separate leagues, that each had it’s own sense of playing style. In the AFL, quarterbacks and offenses were embracing the pass, and they were throwing the ball all over the field. The NFL teams were much more strategic with their quarterbacks. They wanted the quarterback to manage the game, and not make mistakes. On another note, clearly this is when the term “game-manager” came to be.

Baugh, Waterfield, and Graham not only threw the ball down field, but they also played a part in almost every facet of the game. Waterfield was a game-changing punter. Baugh was a great defensive back, and Graham had all of these traits, but focused them on the quarterback position.

You can clearly see football changing by the end of the 1950’s. The forward pass was the new exciting way to move the ball, teams had multiple coaches for different groups, and America loved football when it first started. Now-a-days the NFL is one of the top three most popular leagues in the world. So with guys like Johnny Unitas, Joe Namath, and Bart Starr coming in the next few days, we will really get going to see how much the quarterback position has been revolutionized.

Sunday: The New Age of Quarterback

Tom Brady vs Patrick Mahomes in Superbowl 55 “The Passing of the Torch”
The Man To Man Podcast Episode III: Top Ten QB’s