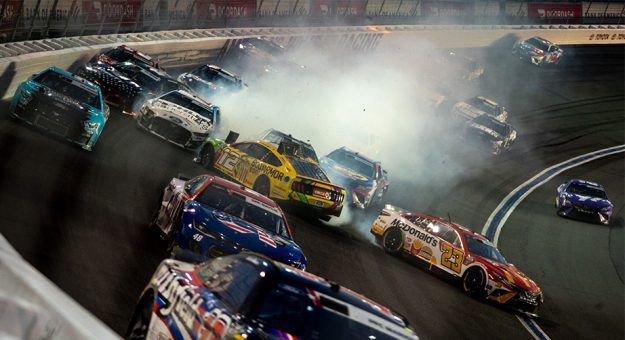 The 2022 NASCAR Cup Series season had no shortage of great racing. The expectations for this season were very high due to the debut of the next-gen car. Some could argue that the racing product for some races were way above expectations for fans and analysts. That being said, there were also some races that fell below expectations for the next-gen car. However, the racing product that was produced in 2022 was the best in years, and these are the five best races from the NASCAR Cup Series in 2022.

Track: Circuit of the Americas

The debut race for the next-gen car on a road course was very solid. This race had high expectations for it, as NASCAR had been claiming that the next-gen car was to excel at road courses and short-track races. In addition, this race had even more eyes on it due to the disaster of a race for NASCAR at Circuit of the Americas in 2021. There were several cautions throughout, but that didn’t stop the intense racing on the track throughout the day. This race also had what could be argued as the best finish of the season. With three lead changes on the last lap, Ross Chastain scored his first career Cup Series win at COTA in a hectic finish. This was easily the best road course race throughout the season and proved that NASCAR can do well at COTA.

The first race of the Round of eight was one of the best races on an intermediate track this season. Possibly overshadowed in the Bubba Wallace and Kyle Larson shoving incident earlier in the race, was the incredible battle for the win. With just three laps to go, Joey Logano passed Ross Chastain in an epic battle for the win. This win was also an automatic pass into the championship four at Phoenix, just a few weeks later. If there is one thing that the next-gen car has excelled at this season, it’s racing at intermediate tracks. Fans and analysts had low expectations coming into the spring race at Las Vegas earlier this year but were treated to a great race. This race was much better than the spring race. There were constant battles on the track and an exciting finish.

The only restrictor-plate track during the playoffs put on the best restrictor-plate race throughout the season. Many fans and analysts had low expectations for the racing coming into this race. Earlier in the week, leading up to Talladega, it was announced that Alex Bowman would miss Talladega due to concussion-like symptoms. Bowman was the second driver to announce that they would miss a race due to concussion-like symptoms. Thankfully, it was a great and safe race with a photo finish. With a late race caution setting up a restart with two laps to go, it set up a fantastic finish for the fans. Chase Elliott, the sport’s most popular driver, edged Ryan Blaney, by a margin of 0.046 seconds to win at Talladega. This race was a classic Talladega race and proved that there didn’t have to be big wrecks to create a good finish.

The second race of the 2022 season was what some considered to be the first true test for the next-gen car. It was apparent all weekend that the next-gen cars were going to be a handful throughout the race.  This race in southern California had almost everything that a race fan could dream of. From countless battles for the lead to tempers between teammates, it was an exciting finish from the green flag to the checkered flag. The 2021 Cup Series Champion, Kyle Larson, would go on to win for the second time at Auto Club in an exciting finish. On a late race restart with four laps to go, Larson and Daniel Suarez would fight for the win in an epic battle between each other. This was the best race at Auto Club in years and had fans looking forward to more throughout the 2022 season.

For the longest race in NASCAR history distance-wise, this was undoubtedly the best Cup Series race of 2022. The next-gen car was tough for the drivers to handle throughout the race, especially in the transition from day to nighttime. This race had everything that a fan could imagine in a race. With that said, one incident had fans scratching their heads late in the race. In a late race accident, Chris Buescher would end up flipping down the front straightaway after the right front tire would get caught underneath the car. Buescher would be unharmed from the incident. Denny Hamlin would go on to win his first Coca-Cola 600 over teammate Kyle Busch in an epic late-race battle. Therefore, the Coca-Cola 600 is the best race of the 2022 NASCAR Cup Series season.

As previously said, the 2022 NASCAR Cup Series season had several great races throughout the season, but some were not so great. The racing this past season could be argued that it was the best in the last five years. However, hopefully, with the changes in the safety of the next-gen car and possibly a new aerodynamic rules package in 2023, the racing can be great at every track.