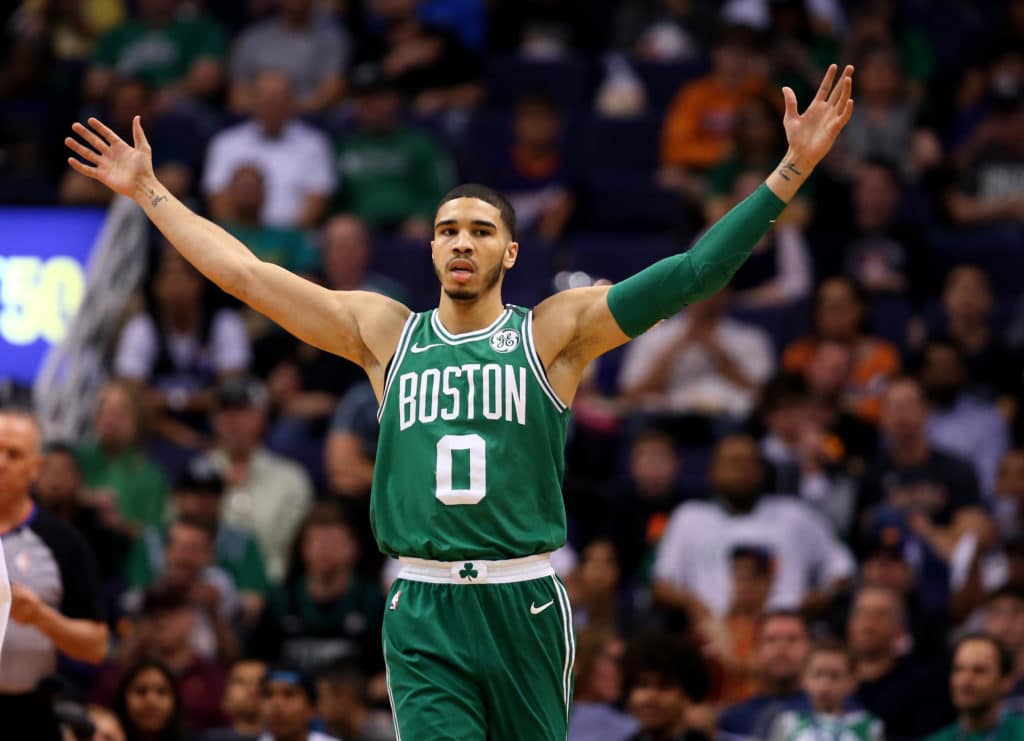 Today marks the one-month anniversary of the tragic death of Kobe Bryant, and while the official memorial is taking place at Staples Center in LA, the impact of the best NBA player of his generation is still being felt across the NBA. Boston Celtics All-Star forward Jayson Tatum, for one, was tremendously impacted by both watching and then learning from Bryant.

“The first thing that comes to mind is just how much does it mean to you to be great?” said Tatum of the Mamba Mentality that has helped him achieve the level of success he’s enjoying. “How hard are you willing to work, how much are you willing to sacrifice to be as great as you can?”

Something Bryant came to understand over the course of his career is the importance of having elite, unselfish teammates, and that’s something Tatum has experienced this season. Many thought Kyrie Irving would help him realize his full potential, but it wasn’t until Irving left and Kemba Walker arrived that Tatum’s numbers really took off.

The difference between Tatum’s stats with Walker and Irving are night and day. With Irving, Tatum was averaging 15.7 points per game, 2.1 assists and 6.0 rebounds. While people still considered Tatum a rising star through his first couple of seasons, but now, with Walker, he is proving he is the star everyone thought he could be. In 52 games this season, Tatum is averaging 22.9 points, 7.0 rebounds and 2.9 assists.

Walker has been an extremely important piece to the Celtics puzzle since arriving in the off-season, and Tatum only had extremely high praise for him and their relationship.

“Kemba, that’s my guy.” said Tatum when referring to Walker during All-Star weekend. “Our relationship and friendship has grown a lot over this season so far, from USA basketball to playing on the Celtics to experiencing All-Star together. So it’s been a good ride. We’re enjoying it.”

With the season a little more than halfway over, The Celtics, being led by Tatum and Walker, are cementing themselves as a legitimate finals contender. Tatum is starting to cement his legacy as a cornerstone of the Celtics franchise by embodying and taking on the Mamba Mentality that was instilled in him by Bryant during their time practicing and training together.

In a video that appeared on ESPN+, Bryant critiqued Tatum’s game by pointing out things like his footwork and explaining that he can improve. Not only was Tatum flattered by the advice of his idol, he took it to heart.

“That was really cool for me. Growing up, Bryant was my favorite player. That was a really special moment for me,” said Tatum regarding Bryant’s advice. “I’ve probably watched it like 25 times already. It’s very helpful information I can take with me.

It took Bryant a couple of seasons to join the ranks of the NBA All-Stars, and after just his third season, Tatum is beginning to find himself following in Bryant’s footsteps with many more All-Star appearances to come.