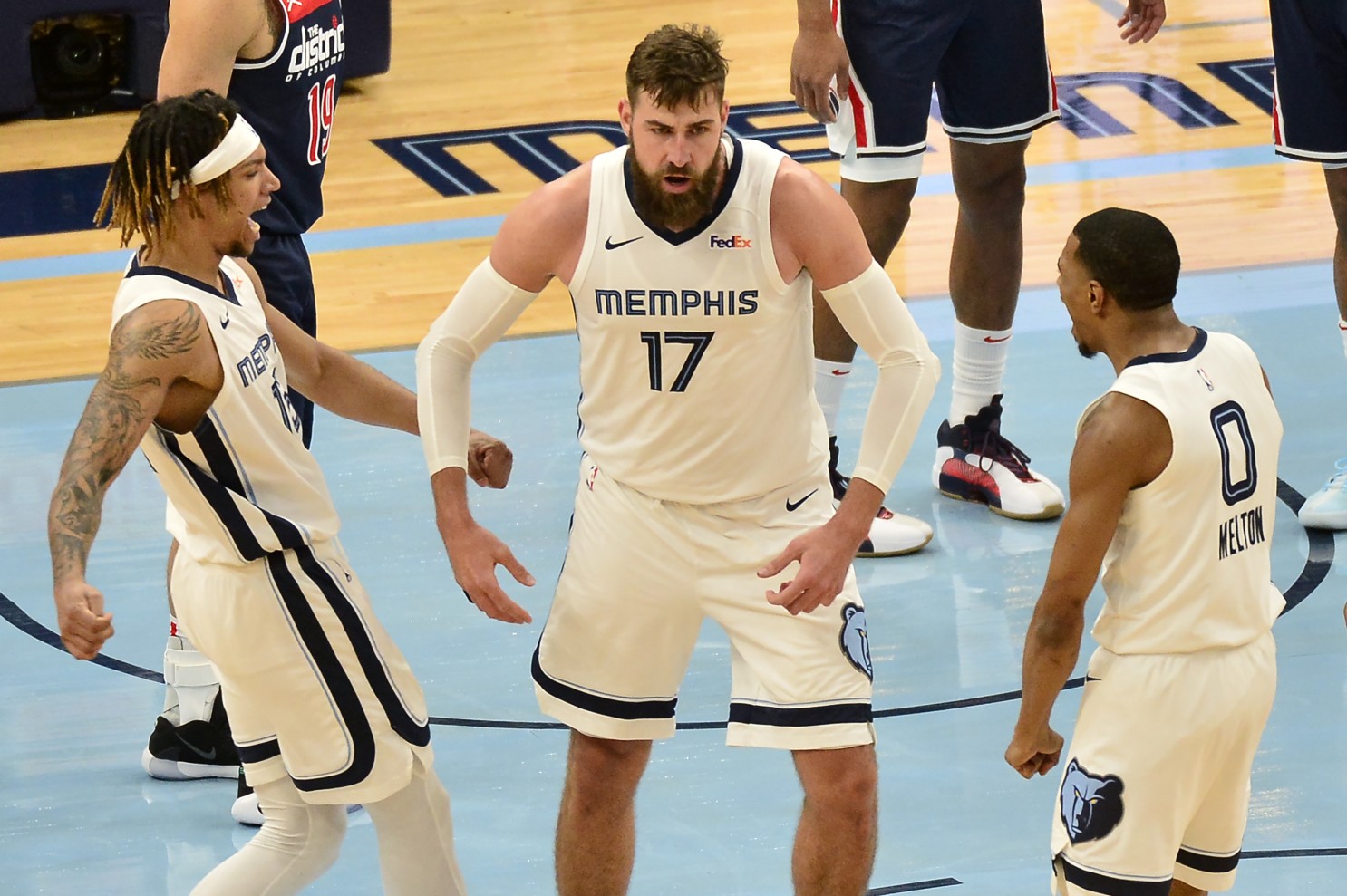 A movement is growing in the depths of the Fedex Forum. It started with media members like myself advocating for a theory that’s at best an unpopular opinion, and has steadily progressed into a tenet of Taylor Jenkins’ rotation for the Memphis Grizzlies. After a narrow victory over the Miami HEAT, I believe it’s time to step into the limelight, confess to my Grit and Grind sacrilege, and reveal myself as a Jonas Valanciunas truther.

Well, more of a Grizzlies-without-Jonas-Valanciunas truther. You see, I’m one of the debbie downers who advocates for Memphis to abandon the team’s traditional notion of building their offense around a Center in the name of newfangled advents like small-ball and spacing.

But in practice, both in combing through numbers and the eye test, I think my theory holds weight. First of all, the Grizzlies are marginally better with Valanciunas off the court. As opposed to his last two seasons in Grind City, JV has a negative point differential, meaning the team performs better when the Lithuanian is off the court. This is not the case for all three of the Grizzlies’ core starters this season.

What’s more, his game is the statistical equivalent of empty calories. JV’s total points + rebounds has almost no correlation to the Grizzlies’ margin of victory, while Valanciunas’ +/- is actually negatively correlated to the team’s margin of victory. The best example of this was Memphis’ 49-point victory over the Houston Rockets, in which Valanciunas somehow finished -1 despite his team winning by nearly 50 points. That shouldn’t be possible.

And of course, my timing of this article is deliberate. Off the heels of an 89-85 victory over the HEAT, coach Jenkins displayed just how dangerous the team can be when they turn to small ball. Though the team’s margin of victory was a meager four points, Brandon Clarke, who functioned exclusively as a small-ball five, finished the night +12, whereas Valanciunas was one of four Grizzlies to finish with a negative +/-.

At the five, Clarke gave Memphis an element of verticality that the lumbering Valanciunas isn’t able to provide at the five. Though he only made one of his five shots against Miami, it’s clear that BC’s abilities in the pick-and-roll spread Miami’s league-leading defense thin. Check out this veteran move from the Gonzaga product, where after drawing a switch, he pushes Nunn into Grayson Allen in order to pick up a foul on the opposition. Given that Clarke hasn’t played the five until this year, it’s a fantastic sign that he’s already displaying the craftiness of a veteran big.

“[With small lineups], you gotta guard us one through five for sure,” said De’Anthony Melton after the game. “BC coming off the five, he’s faster and jumps higher than most five men, so he’s running up and down the floor and you got everyone else pushing it and spacing the floor too…It’s a tough guard, cuz you don’t know who’s gonna attack and who’s gonna attack from where”

Meanwhile, Clarke gives the Grizzlies a defensive it-factor that slower, broader centers can’t afford. Namely, due to his aforementioned burst and speed, the second-year big can recover much better than his frontcourt companions when the defense is thrown off its axis. I damn near jumped out of my chair at this sequence, in which Clarke gets taken out of the play trying to guard a Goran Dragic floater, only to stay quick on his feet enough to strip Precious Achiuwa of his title as Memphis’ favorite tweener forward.

Finally, missing a traditional big spurred the Grizzlies to start rebounding in numbers “We played BC at the five so we were a little bit smaller, ”  said Jenkins, “but I thought there was tons of gang rebounding…that allowed us to solidify some stops, get out and run, and just get some juice going.” Bears generally don’t travel in packs, but Memphis took exception to that rule on Wednesday, chasing down boards with a teamwide tenacity. Plays like the following were commonplace against Miami, where the absence of Valanciunas led to a team-wide effort to crash the glass. Just look at Memphis committing four bodies to securing the board here.

All in all, Memphis’ small-ball surge culminated in a Ja Morant game-winner with Valanciunas off the floor. Though no doubt a product of the Murray State guard’s unparalleled driving ability, look how far Clarke drives Bam Adebayo away from the paint on the attempt.

After several close losses to top-tier squads like the Milwaukee Bucks and Denver Nuggets, it has to be a momentum shifter for the Grizz to pull out a clutch victory against the reigning Eastern Conference champion. With matchups against the Utah Jazz and Golden State Warriors on the docket, Memphis’ immediate schedule will be a great test of how far small ball will take them.