The Hogs and The Dawgs: Arkansas at Georgia Preview 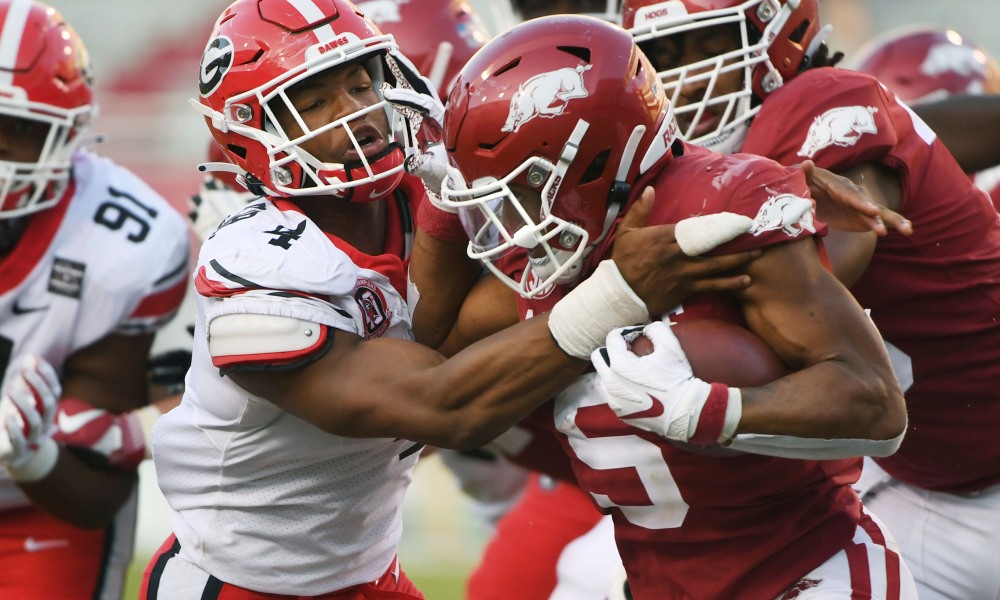 The Hogs And The Dogs

One of two SEC matchups this weekend with serious top-ten implications, Pittman and the Razorbacks, which would also make a great band name, will travel to Athens to take on Kirby and the Bulldogs, even better band name. Georgia is coming off of an 62-0 assault on Vanderbilt, while Arkansas has completed their sweep of the the state of Texas and looks to continue rolling through conference play. Per the AP, Georgia is currently the No. 2 team in the country while Arkansas currently holds the No. 8 spot. Do the Razorbacks have what it takes to extend their upset tour? Or will the Bulldogs make an example of their next challenger?

Unfortunately for the Hogs, Georgia has just about every advantage in this game. KJ Jefferson is questionable, the game is in Athens, and Georgia is not at all susceptible to the issues that plagued Texas and Texas A&M when they fell to the Razorbacks. Arkansas likes to stay run-heavy right up until you really commit, then they hit you hard over the top with a play action. I don’t know that it’s this simple, but I have a hard time imagining Georgia is going to allow that to happen. Assume Georgia shuts down the run-game early, which is a very safe bet for those unfamiliar with this years Georgia defense. Now you’re looking for a playmaker Jefferson might be struggling, and that’s if he’s healthy in the first place. Now if you’re Arkansas, you have to entirely rely on Malik Hornsby (Arkansas’ backup QB for the Georgia fans who haven’t followed the Hogs this year) passing the ball against a defense that’s allowed only 23 points through four games. If the game falls that way, Georgia walks away with this one.

That’s the worst case scenario for Arkansas. But, I want to talk about how Georgia can win even if a couple things go Arkansas’ way. I’ve had my concerns about the Georgia offense, and despite three straight games with 40+ points, I still do. That’s because they scored three offensive points in the season opener and haven’t played a legitimate defense since then. The good news is even if your offense starts to sputter, you can really lean on the interior of your defensive line, even against a big and physical Arkansas front. Then, hope turnovers put you in a favorable position where you simply hold a lead and wait for the game to be over.

It’s possible, don’t let anybody tell you it isn’t. But, a lot of things are going to have to go Arkansas’ way for them to win this game. First and foremost, watch the Clemson tape. By the end of that game, I was convinced the Georgia offense would be their downfall, I still believe that. The Arkansas defense, who has already neutralized two ranked teams, can very well keep Georgia from moving the ball well. If they take away good decisions for JT Daniels and force him to make bad ones, you can sneak in a lead just by winning field position and turnover differential. I don’t think Arkansas can win this game 35-17, but I do think they can win along the lines of 10-6. In the scenario where that does happen, I think Arkansas could lead throughout all four quarters.

Arkansas is arguably a much more proven team. Especially now that the Bulldogs’ big win came from a team that is now on the brink of being unranked. They’ve faced better offenses, better defenses, and done so more often. If they come out hot on either side of the ball, Georgia’s forced to make some serious adjustments. Those adjustments may not stop the bleeding. Arkansas could ride off into the sunset with their third straight upset. Or, those adjustments could be the straw that broke the camels back on an exciting team that just couldn’t match up talent wise to one of the SEC’s elite.

Some of you know I’ve picked Arkansas in every game they’ve played this year. I had them to upset Texas as well and Texas A&M, unfortunately, today I’m ending that streak. I’m just not comfortable picking them to upset the best Georgia team we’ve seen in years. I hope Arkansas puts up a fight, but Georgia more than likely gets away with this win. Still, I think Arkansas is an incredible football team. I do NOT think they can be written off if they come up short Saturday. This is a stacked Georgia defense, and stylistically this matchup is a nightmare for Arkansas. A loss Saturday does NOT make Arkansas a bad team, and I don’t want to hear anyone say otherwise. However, a dominant Georgia win might be enough to propel them to the No. 1 spot, pending the outcome of Bama and Ole Miss.