The Lakers’ Depth Is Leading the Way 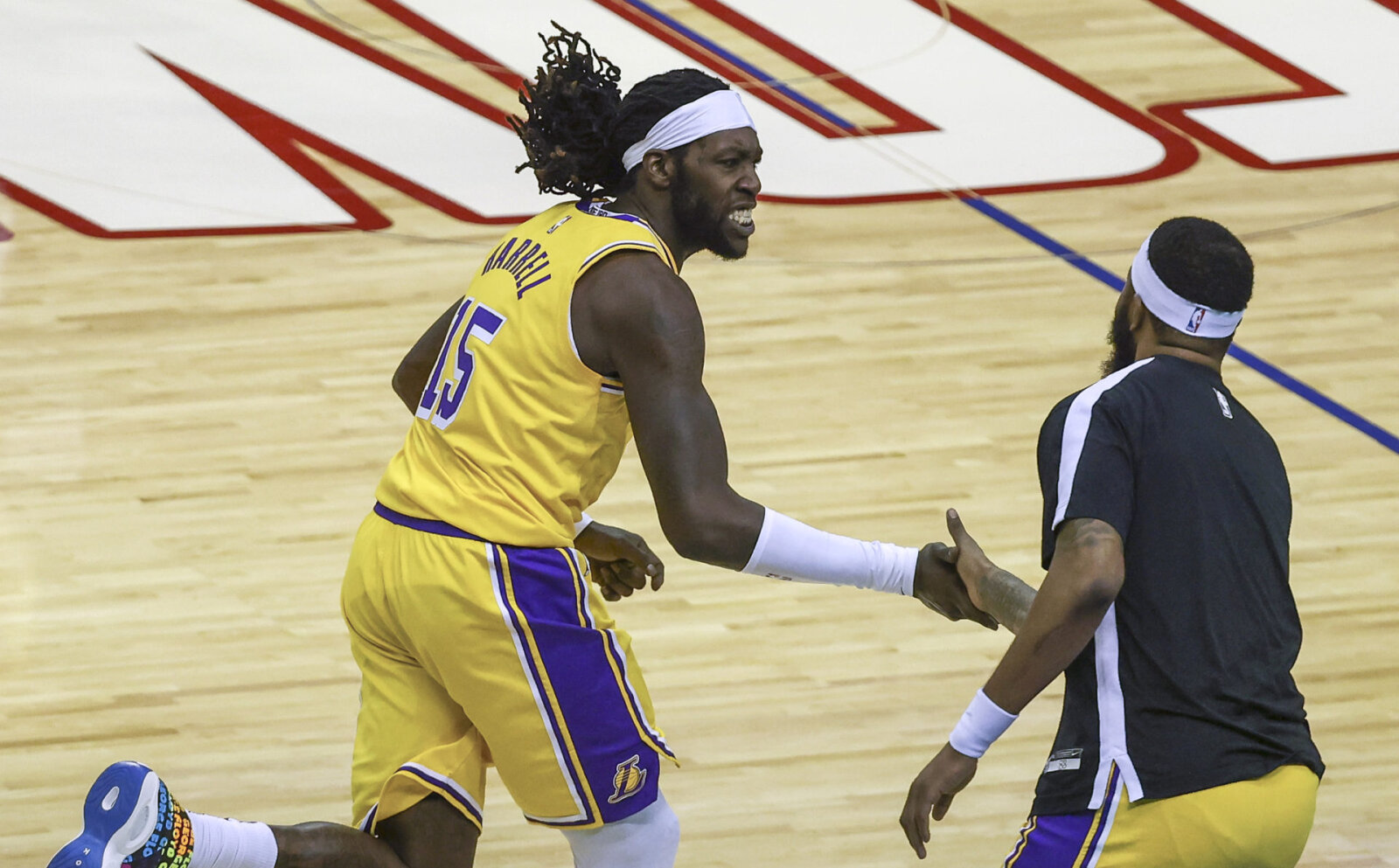 When Anthony Davis went down with his lower leg injury a few month ago, many looked for LeBron James to carry the load. However, when James went down with his ankle sprain many doubted the Los Angeles Lakers to keep afloat. Not to mention that without their two superstars, they were in real danger of being apart of the play-in scenario. Especially because the depth did look lost without both James and Davis on the floor during the season.

Good news for the Lakers is that they will soon be with both James and Davis in the near future. James posted a photo on his instagram saying “The weatherman says the weather is changing soon and it predicts a thunderstorm…”

These Guys Have Grit

The Lakers have gone 5-6 since James went down with his high ankle sprain. Many viewed this as the demise for the purple and gold for the very question of who is going to lead the team? While that is a great question to ask, the correct answer to say is a team effort. And that is exactly what is happening right now.

Coming into the new season, the Lakers were regarded as the team with the most depth. While that is true, nobody foresaw that they would be without their two superstars for extended periods of times. With everyone counting the team out, they banded together and showed the are capable of holding down the fort.

We’ve learned one important trait about the Lakers depth thus far. They have grit and when I say grit, they play tough hard-nosed basketball. The type of basketball where they aren’t scared to play physical, they aren’t scared if another team is superior on paper, they’ll keep coming at you constantly until the clock hits zero. And this is something that is exactly what this team needs as the defending champions. With everyone coming at the Lakers with their best shot, the best thing to do is fight back and show no fear.

Thus far the one who has been doing the most with their opportunity is Markieff Morris. As I’ve stated before Morris is in a special situation on this team, he the only big on the roster that is able to shoot from the perimeter as well as taking someone down low. Kieff understands when and where to take his mismatches during the pick and roll. Whether that be posting up when a guard switches to him or popping for three when his defender decides to help on the drive. Over the last 11 games, Markieff has averaged 11.3 points, 6.5 rebounds on 36.5% from behind the arc.

Dennis Schröder has also been the catalyst for the Lakers during the run. Heading into the year, Dennis said that he was going to start at point guard. Many doubted this would work and instead be a detriment. However, that hasn’t been the case whatsoever. Dennis comes to every game with a chip on his shoulder as if he has something to prove due to his size. But that is exactly where his heart comes to play. As the saying goes “it’s not about the size of the dog in a fight; it’s the size of the fight in a dog”, and that is exactly what describes Dennis at his best. Since James and Davis have gone down, Schröder has averaged 16.2 points, eight assists, 3.6 rebounds and two steals on 39% from behind the arc, 40% from the field and 87% from the free throw line.

Kentavious Caldwell-Pope is looking like he did at the beginning of the season. During the period without James and Davis, Caldwell-Pope is averaging 10.7 points on 45% from behind the three point line. Due to KCP’s recent resurgence, it opens up the floor for drives as he is a threat from three. Not to mention that should he continue to keep shooting like this when James and Davis return, it only makes this team that much better.

Coming into the season the Lakers weren’t labeled as a three point shooting team. In a sense, that is true they aren’t one. However, they are very streaky. They can either be streaky good and streaky bad, to the point where they can make 10+ threes one game and then hit around eight or lower for a game. As of late the Lakers depth has been knocking down their shots from three. It has been a main component as to why they are winning game. They also have been shooting more from three. In their last five games, the Lakers have shot an incredible 44% (73/165) from three. Should this continue heading into the playoffs, they will be a threat from all facets of the floor. Not to mention it will create opportunities for Davis on the block and James on the drive.

It’s always good to add more depth, especially if can take a team to another level. For Andre Drummond and Ben McLemore they’ve made impacts even though they’ve played only a few games with the Lakers. Most notably against the Brooklyn Nets is where these two really came to play. After sitting out with a toe injury, Drummond had himself a double-double with 20 points and 11 rebounds. Heading into the Nets game, Drummond had a physical advantage over the Nets’ bigs with his size and strength. And that is exactly what he did, punishing Lamarcus Aldridge in the paint and even calling him “too small”.

But what makes this interesting is that his leadership showed. Once Kyrie Irving and Dennis Schröder were ejected in a close game, he gathered the troops and told everyone to stand their ground on defense. Those are the little things that you can’t teach and can put a team over the top.

Ben McLemore went berserk against the Brooklyn Nets Saturday evening. Still looking to find his place in the rotation, McLemore is a microwave scorer meaning he only needs to see one bucket go in for him to get hot. And Brooklyn had a glimpse of that first hand. Just like KCP, McLemore’s job is to space the floor and make shots when he’s open. To open up the fourth quarter, McLemore hit five straight shots, four from behind the arc. That is exactly what the Lakers needed, a depth player who can get a bucket when the team needs it.

Grading the Philadelphia 76ers’ Road Trip
College Baseball: Everything You Need to Know with The CWS Two Months Away