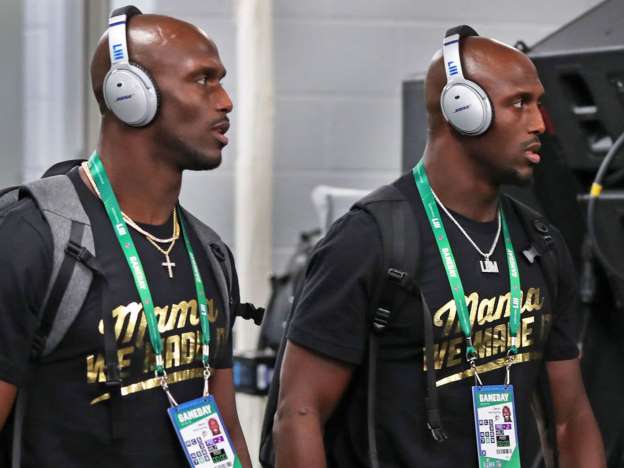 On April 12, the Embrace Kids Foundation paired up with NFL players to raise awareness and show support in New York City for those effected by sickle cell.

“For myself and I know Dev (McCourty), we started to work with them about seven years ago and it extended beyond that”, said Jason when referring to the strong partnership he’s been able to establish with the research foundation per Ryan Stern of Back Sports Page.

“The relationship just developed over the years, whether we’re doing the Rally at the Alley, a 5K, Casino Night, the Blood Drive: we’re trying to do whatever we can to raise money for research, for families, and trying to do our part to give back”.

Personally the McCourty twins have seen their father and aunt both be effected on a daily battle with sickle cell. So, they are doing their best to make sure other families of all kind aren’t alone and making sure every step is taken to find solutions.

The McCourty twins helped put on a very memorable event as the night was filled with high spirits, genuine care, and contagious laughs. Families throughout the NJ/NY area embraced in conversation, photos, autographs, played catch and bowled with some of the sports world’s biggest names.

Chicago Bears’ Mike Burton and former Rutgers University player said, “it’s a really special event, supporting pediatric cancer, blood disorders, specifically sickle cell: you know it’s really nice to come out here to help families and help kids go through these difficult times because they do a lot more for us than we do for them and they don’t even know it” per Stern.

Burton finished up with saying that the dynamic of having a Rutgers community so strong has set his NFL life up for success on a daily basis.

Mohammed Sanu himself correlates a lot his success to this day from the bonds that he started at Rutgers, which has enabled him to be part of these events that bring up bigger issues.

Furthermore, Stern asked Mohammed about his perspective of fan engagement through this charity and he said, “You show them love and get to spend time with them, see them on a deeper level and it’s special”.

Sanu finished up by saying the McCourty Twins have embodied the kind of people you want to be around because of their off-the-field awareness to these issues.

The Rutgers community was huge in their presence as they gave immense support towards the McCourty twins, evidently showing that the Rutgers family stands by each other forever.

As the night went on, there were tables set-up that displayed items up for auction. The items that were being auctioned ranged from: future events at Bowlmor, season tickets to Rutgers, and signed Super Bowl memorabilia by the twins themselves.

With this foundation, the McCourty twins have paid tribute to growing efforts towards solving bigger problems, so that one day everyone can live their daily life with one less battle. Lastly, they are showing children and fans of all kind that with camaraderie comes support of all kinds.