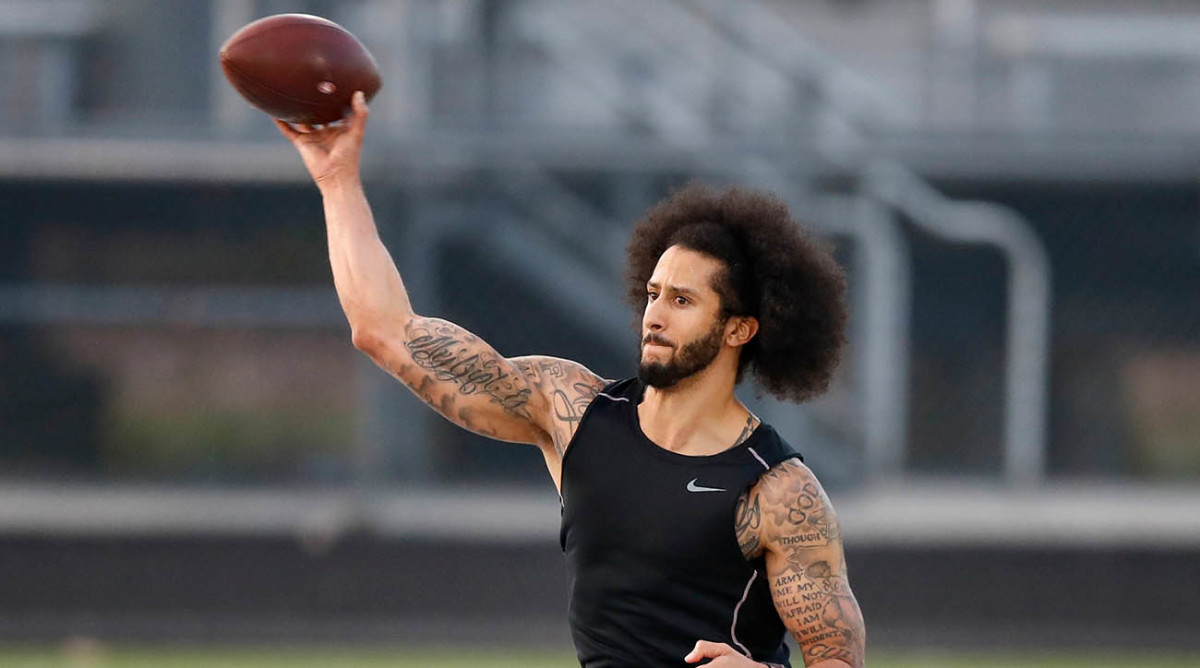 Kaepernick began protesting racial injustice and police brutality during the 2016-17 season and since then has remained unsigned by the NFL. In October 2017, Kaepernick filed a grievance against the NFL accusing them of colluding to keep him out of the league. Kaepernick reached a confidential settlement with the NFL in February 2019 and withdrew the grievance.

On Tuesday, November 12, NFL teams were informed that a private workout would be held for Kaepernick on Saturday, November 16. The NFL’s memo to the league said, “Earlier this year, we discussed some possible steps with his representatives and they recently emphasized his level of preparation and that he is ready to work out for clubs and be interviewed by them. We have therefore arranged this opportunity for him to work out, and for all clubs to have the opportunity to evaluate his current readiness and level of interest in resuming his NFL career.”

After it was announced, Kaepernick tweeted Tuesday night, “I’m just getting word from my representatives that the NFL league office reached out to them about a workout in Atlanta on Saturday. I’ve been in shape and ready for this for 3 years, can’t wait to see the head coaches and GMs on Saturday.”

Based on Kaepernick’s response, it seems like he was completely unaware that this tryout was going to happen and found out the same day the public did. That is the first red flag. You would think that Kaepernick would have been made aware of the NFL’s intention to host a workout in advance of just a few days before it was scheduled. Kaepernick did not ask the league himself for a workout to be scheduled. The league instigated it themselves. It’s suspicious.

The second red flag is that the NFL scheduled it on a Saturday, the day before Sunday games. This doesn’t happen. Workouts are not held on Saturdays since team personnel is usually busy preparing for the game the next day. Workouts are usually held on Tuesdays, as that is when coaches are most available. Hosting the workout on a Saturday is arbitrary and does not put Kaepernick in the best position to be signed. Why couldn’t the workout been scheduled on a less busy day for team personnel?

Scheduling it on a Saturday is just straight rude, as teams had only THREE days to decide if they wanted to send representatives to the workout. THREE! That is the third reg flag. Teams are being forced to evaluate Kaepernick on the fly and without the necessary diligence. ESPN reported that the league asked for the workout to be pushed to the following Saturday and the NFL said no.

There is absolutely no reason why the workout needed to be this specific Saturday. If teams are requesting that they needed more time, why not comply? Isn’t the objective to get Kaepernick signed? Wouldn’t denying the league’s request potentially put Kaepernick in a worse position to be signed?

The NFL’s motives are so questionable. They say they want Kaepernick to be signed, but their actions are setting him up to fail. Instead of the NFL doing everything they can to accommodate Kaepernick and the rest of the league, they are forcing everyone to abide by the conditions they have set.

Organizing a workout for Kaepernick seems to be more of an attempt to generate good PR for the NFL following the collusion lawsuit and not a genuine attempt to get Kaepernick back in the league. If the NFL was serious about Kaepernick’s career they would have complied with every request that Kaepernick and the rest of the league made. Because it’s all about getting him signed, right NFL?

The NFL sponsored workout was scheduled to be at the Atlanta Falcons practice facility. However, on the day of the workout, Kaepernick switched the location to a non-NFL sponsored high school 60 miles away.

The statement suggests that the NFL attempted to get Kaepernick to sign a waiver that dealt with his employment status and not the normal one for injuries. According to ProFootballTalk.com, the employment waiver would have “exonerated the league of any and all responsibility for the violations of his rights that may have (have) occurred since the grievance was settled in February.”

The NFL was never motivated to find Kaepernick a job. They just didn’t want to be blamed for his unemployment anymore. The sham workout was to give the illusion that the NFL isn’t actively still colluding to keep him off a team. The NFL is pretending to make a selfless move when really they are making a selfish move.

The NFL wanted to get out of this looking like they gave Kaepernick a shot to get back in the league. Instead, it shows that they never actually gave a crap. The NFL has proven time and time again that the reason Kaepernick does not play for a team is because of the issues he speaks out against and not because of his ability to play football. Hosting a workout was the NFL’s attempt to prove Kaepernick’s absence was never about his politics when it has so obviously always been about his politics.

Dave Zirin of The Nation tweeted it best: “Putting today’s Goodell shitshow on Kaepernick – as many prominent voices are doing – is like saying that a person who walks out of a rancid restaurant to eat somewhere else also magically cooked the food.”

Kaepernick did not cook the food, so he shouldn’t be forced to eat it when it’s spoiled. There’s no reason to get mad at him for wanting to eat somewhere else.