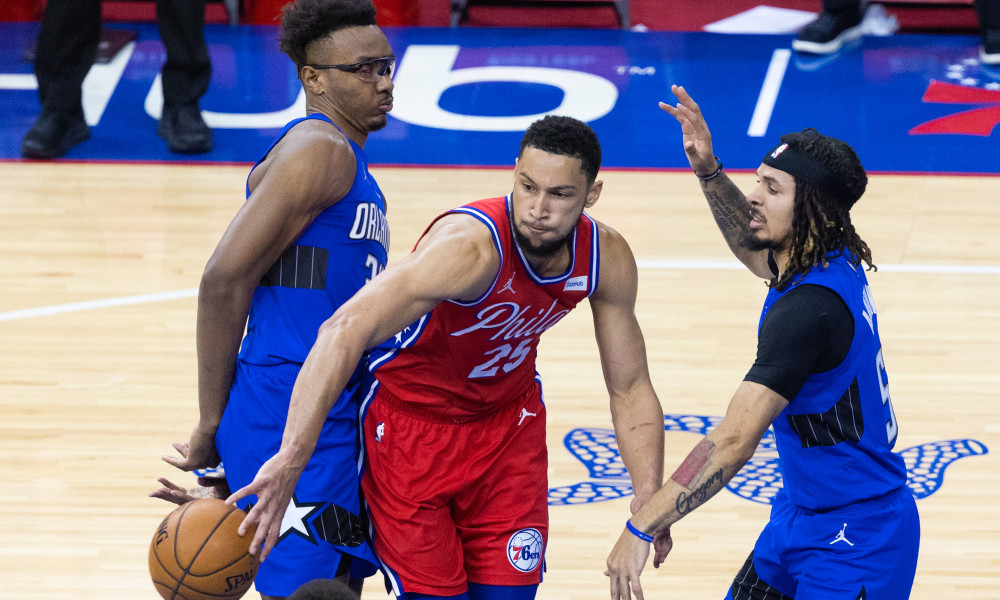 The third time was indeed the charm for the Philadelphia 76ers, who finally completed their drive to the first seed with a 122-97 victory over the Orlando Magic. The Magic aren’t good, but it’s a nice ‘righting of the ship’ after a second half collapse against the Indiana Pacers and a blowout loss versus the Miami Heat in the Sixers previous two chances to clinch. This will be the 76ers’ first one seed (and Atlantic Division win) since the 2000-2001 season, which ended in a NBA Finals loss to the Los Angeles Lakers. Philly fans will be hoping (almost expecting) to replicate that trip to the Finals, hopefully with a different end result.

The Eastern Conference can be divided into three clean tiers. The top tier are the Sixers, the Brooklyn Nets and the Milwaukee Bucks, who will all finish with 45+ wins. These are the teams considered true contenders to represent the East in the Finals. Then you have the 4-6 teams, the Atlanta Hawks, Miami Heat and the New York Knicks, who will finish with about 40 wins. These teams are good, but not nearly the threats of the top three teams. The Heat are an exception, as they have that pedigree, but over the course of the season haven’t shown up consistently. The other two teams are nice stories, but shouldn’t threaten the top tier. Atlanta is 3-6 against the best of the East, and the Knicks are 2-7.

Finally, you have the play-in tier, who will all finish with around 35 wins (each tier ends up being separated by five wins, a nice even divide) consisting of the Boston Celtics (inconsistent all year and recently lost Jaylen Brown), the Charlotte Hornets (solid group but lack the firepower, especially without Gordon Hayward, to really threaten the teams above), the Indiana Pacers (same as the Hornets) and the Washington Wizards (two fantastic stars without much around them).

Why is the One Seed So Important?

The one seed was a crucial pick up because of these tiers. The one seed alone gets the privilege of not having to face two teams in the top tier. In a normal tournament, assuming chalk, the one seed plays the eighth, fourth and second seeds. The second seed plays the seventh, third and first. Avoiding both the Bucks AND the Nets is so valuable. Whichever team comes out of that fight will most likely be exhausted and mentally worn down, not to mention the possibility of losing to a fellow top tier team is so much greater than losing to any team in the lower tiers.

The current standings have the Hawks fourth, the Heat fifth and the Knicks sixth, with the Hawks half a game ahead. The Hawks last game is against the Houston Rockets, a near assured win as the Rockets are the worst team in the league. That brings them to 42-30, meaning both the Heat and the Knicks will need to win both their remaining games to tie them.

The Knicks play two good, but beatable teams in the Hornets and the Celtics. Both teams are locked into the play-in tournament and the Celtics especially have very little to play for in terms of seeding and in realistic chance to win the Finals with Brown’s season-ending injury. Neither game is a walk in the park though, and the Knicks are currently 1-1 against both.

The Heat face a tough challenge against the Milwaukee Bucks and then what should be a pushover in the Detroit Pistons. The Bucks may not have much to play for however, as the Nets will need to lose to one of the Chicago Bulls or the Cleveland Cavaliers for the Bucks to have a chance to catch them and take the second seed.

The Hawks own the tiebreaker over the Heat, but lose it to the Knicks, however the Knicks lose their tiebreaker to the Heat. The Hawks basically cannot drop out of the fourth or fifth spot, which for the Sixers’ purposes are basically the same. If the Knicks and Heat win out, things get confusing. If I’m interpreting the rules correctly, the Hawks will be the fourth seed because they will have won the Southeast Division due to being up in their head-to-head versus the Heat, and the Heat will be the fifth because they are either up in the head-to-head versus the Knicks, or because they have the best winning percentage in games among the tied teams.

The loss against the Heat was an unfortunate one for the 76ers. It might not matter at the end of the day, but beating Miami could’ve helped to send them to the sixth seed, instead of fourth or fifth. The only way for the Heat to finish sixth now is if they drop a game (not impossible considering they play the Bucks) and for the Knicks to win out. If the Sixers had beat the Heat on Thursday, the Knicks would be in control of their own destiny, while the Heat would need a Knicks loss.

Again, this matters because the Heat are really the only team in the middle tier that can realistically challenge one of the top tiers in a seven game series. The one seed plays the winner of the fourth and fifth seed, so if the Heat were sixth the Sixers would only play one of the Nets, Bucks or Heat.

The Heat have shown, when fully healthy, they can battle anyone. Basically the same roster embarrassed the Bucks on route to the Finals last year. Jimmy Butler is a straight up winner, and Bam Adebayo is a top three center in the league. They are 8-2 in their last 10, and no one really wants to see them in the playoffs. Facing the Heat is still better than having to face two of the top tier teams, but it’s not ideal.

Of course, only looking at the Sixers’ second and third round matchups is putting the cart before the horse, as they still have their first round opponent to go through. At this time though, any of the four play-in teams could be the eighth seed, meaning predicting anything now isn’t very helpful. Of the four teams, Washington is playing the best basketball right now, however Bradley Beal might not be available or 100%, and without him the Wizards aren’t a threat. Then again, the other three teams are also battling key injuries. Gordon Hayward for the Hornets, Myles Turner, Malcolm Brogdon, T.J. Warren and Caris LeVert for the Pacers, and Jaylen Brown for the Celtics.

None of those teams should trouble the Sixers in a series considering the Sixers are a combined 11-1 versus them. The only loss was the most recent game against the Pacers, but Philadelphia was without Joel Embiid, Matisse Thybulle, Shake Milton and Furkan Korkmaz, four guys that will almost certainly see playoff minutes. Come playoff time, it will be difficult for any of them to come out on top of a healthy Sixers team, even if those teams were healthy themselves. Which they aren’t.

The Sixers have put themselves in an incredible position to win their first title since 1983. Clinching the one seed was crucial for matchups, but also for confidence and securing their guys some rest before the playoffs, not to mention home court throughout the East. It might not have been the perfect scenario like sending the Heat to the sixth seed (which can still happen) but it’s good enough. Conference Finals are the minimum expectation here, and the NBA Finals are right within their grasp. The 76ers have fought hard all season for this privilege, it’s time to cash in.