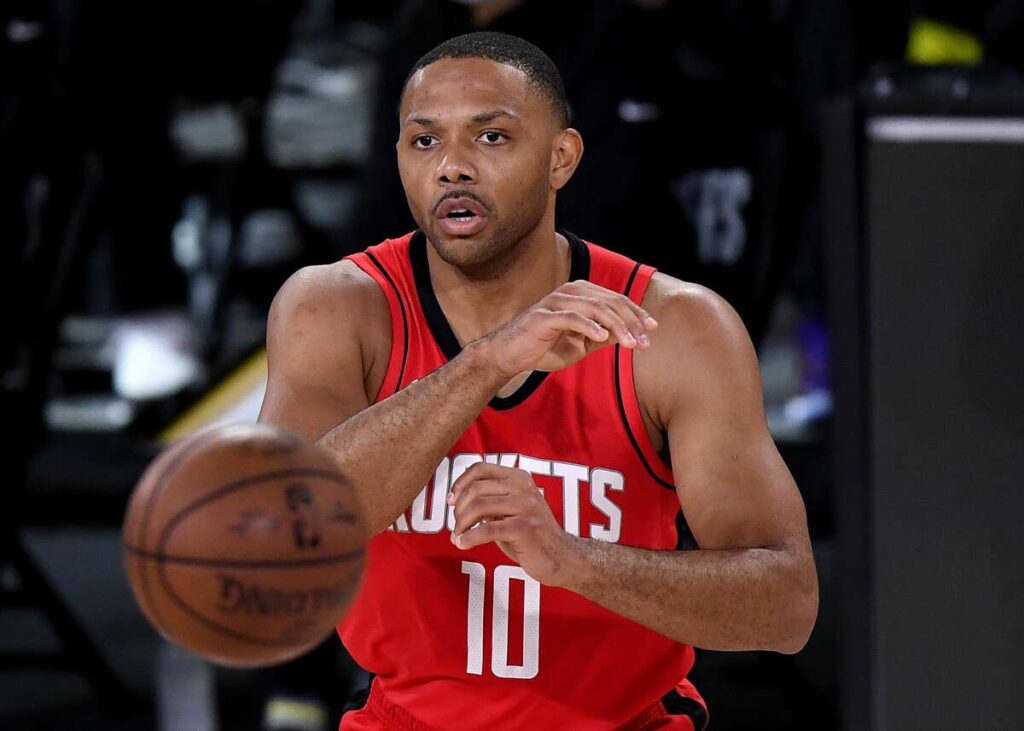 It’s Christmas season, and you know what that means; trade talks are in full effect in the NBA. After the first quarter of the season, the Houston Rockets are reportedly more open to trading veteran wing player Eric Gordon this season as they continue their rebuild following the departure of James Harden and Russell Westbrook in 2020.

Eric Gordon is currently the last piece remaining on the roster. He was acquired during the Rockets playoff contention era, and has served well in that role, earning multiple Sixth Man of the Year awards. Following the collapse into the current rebuild, Gordon is still on the roster. This season, he is averaging a career-low 11.8 points per game this season.

His career low in points is mainly due to Houston’s primary focus on developing young players such as Kevin Porter Jr., Jalen Green, Alperen Sengun, and rookie Jabari Smith. While this is true, Gordon is still in the starting lineup, inevitably taking minutes away from players on a rebuilding team who desperately need it.

Also, this is the final year of his contract, and Gordon is earning nearly $20 million. Initially, he mentioned multiple times expressing the desire to finish his career as a Rocket prior to the beginning of this season. Over the last few games, it’s been a different story.

In the last couple of matchups, Gordon expressed discontent playing on the court, as he voluntarily benched himself over disappointing losses against the San Antonio Spurs and Portland Trailblazers. This may indicate a new desire for Gordon to redirect his role back to contending ways. It’s clear he’s made it known to play for a better team. Nevertheless, he has remained professional and patient due to his love for the city of Houston.

The Rockets are in a better situation than previous times for Eric Gordon. Although Gordon is on the final year of his contract, there’s extreme consideration from contending teams. At 33 years old, he carries the significant ability to create shots, play on and off the ball, and contribute defensively. Behind the arc, Gordon is shooting 35% on five attempts per game, and the Rockets are 2.5 points better defensively when he is on the floor.

So, if there was a team that would love Eric Gordon’s services, who would it be? Gordon can be used from a multitude of NBA teams that need holes to fill their mistakes. The best case scenario would be for struggling teams that are desperate to be in playoff contention. One team would be the Los Angeles Lakers. Gordon’s three point specialty would improve their overall three point percentage, as they are last in the league.

He would be able to space the floor for Russell Westbrook and LeBron James’ facilitation. Adding Gordon to the team will boost their offense and put them back in contention, as they are currently out of the playoff picture. The Lakers can give up players such as Patrick Beverley or Kendrick Nunn in order for Houston to prioritize their young players more.

Another trade option is the New York Knicks. Again, Gordon’s three point prowess off the bench will create more depth for New York, as they have a few veteran players, such as Derrick Rose and Evan Fournier, who aren’t contributing as much to the team. New York is also trying to maintain their playoff picture, so a boost to their bench in exchange for Rose/Fournier and a young player in Quentin Grimes or Immanuel Quickley will benefit them in the right direction. It will also create more player development opportunities for Coach Stephen Silas and general manager Rafael Stone.

Contenders and playoff hopefuls have reportedly expressed interest in Gordon over the last couple of seasons. The Rockets have definitely received offers for him in the past, including during the draft, offseason, and trade deadline. Due to his contract situation, it’s more than likely that a trade will happen before the deadline in February.