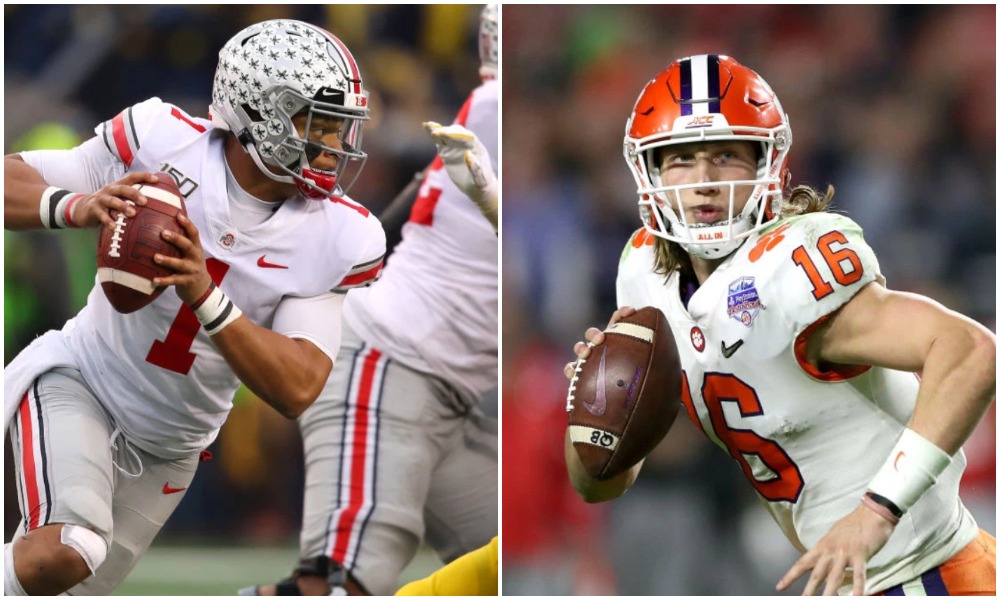 Well, the college football playoffs is upon us starting the new year off with truly a spectacle between the two best college Quarterbacks in college football today. 2020 hasn’t been the best year for most people due to a global pandemic but at least we still have sports to rely on for excitement.

On January 1st, 2021 it will be round three between the two infamous Georgia grown quarterbacks. One being Clemson’s once and a lifetime QB prospect Trevor Lawrence. The other being the true underdog in Justin Fields. Trevor Lawrence has been nothing but a winner since his freshman year of high school at Cartersville high school. As he was 56-2 with two state championships.

As a five star recruit he committed to Clemson his junior year. Clemson’s head coach Dabo Swinney started Trevor Lawrence after three games and the rest was history. Kelly Bryant who was the starter before Lawrence came along transferred and Lawrence became the first Quarterback true freshman to win a national championship dethroning Nick Saban’s Roll Tide.

NFL analysts were saying that Lawrence would have been the projected first pick in the 2019 NFL draft if he was eligible to come out of school that year.  Now, being the most influential player in college football today. Now Lawrence is expected to be the first player chosen in the 2021 NFL draft being the highest graded NFL Quarterback prospect since Andrew Luck in 2011.

In the other corner is Ohio State’s mobile and resilient quarterback Justin Fields. Fields was a five star recruit coming out of Harrison high school which is also in Georgia. He committed to the University of Georgia where he was a backup to now third string Buffalo Bills quarterback Jake Fromm. Fields was a dual threat QB with over 2,000 rushing yards with over 4,000 passing.

Showing how dynamic Fields then transferred to Ohio State in 2019. He led them to a Big Ten championship and being a Heisman finalist. These two started off as the two best quarterbacks invited to the Elite 11. The Elite 11 is the biggest high school quarterback competition run by Ravens super bowl winning quarterback Trent Dilfer.

Lawrence being ranked #1 and Fields being ranked #2. They ended up facing each other in the last 7 on 7 competition for the title as Fields outplays Lawrence significantly playing perfect football. Therefore, Lawrence struggled in the first half and he couldn’t recover from the deficit. Justin Fields ended up winning the Elite 11 showing that Justin Fields has arrived.

Two years later they met in the college football playoff semifinal. Ohio State was the #2 seed and Clemson was the #3 seed. As Fields went 30/46 with 320 passing yards, one touchdown and 2 interceptions. One of those interceptions being in the end zone with 34 seconds left ending Ohio State’s season.

Lawrence on the other hand showed up when it mattered, marching down the field with 4 plays going 96 yards to give Clemson the lead late in the 4th quarter. Lawrence was 18/33 with 259 yards with 2 passing touchdowns and an amazing 67 yard rushing touchdown to deflect Ohio State’s lead by two ending the first half.

Now the college football committee has announced that #2 ranked Clemson will play #3 ranked Ohio State in the semifinal for the second year in a row for the Allstate Championship and a spot in the National Championship game on January 7th. Who will win the rubber match? Will Justin Fields show that he can potentially be the #1 pick by beating the nearly invincible Trevor Lawrence or will Lawrence find a way to win once again in the big game like he always does… We will find out on January 1, 2021.