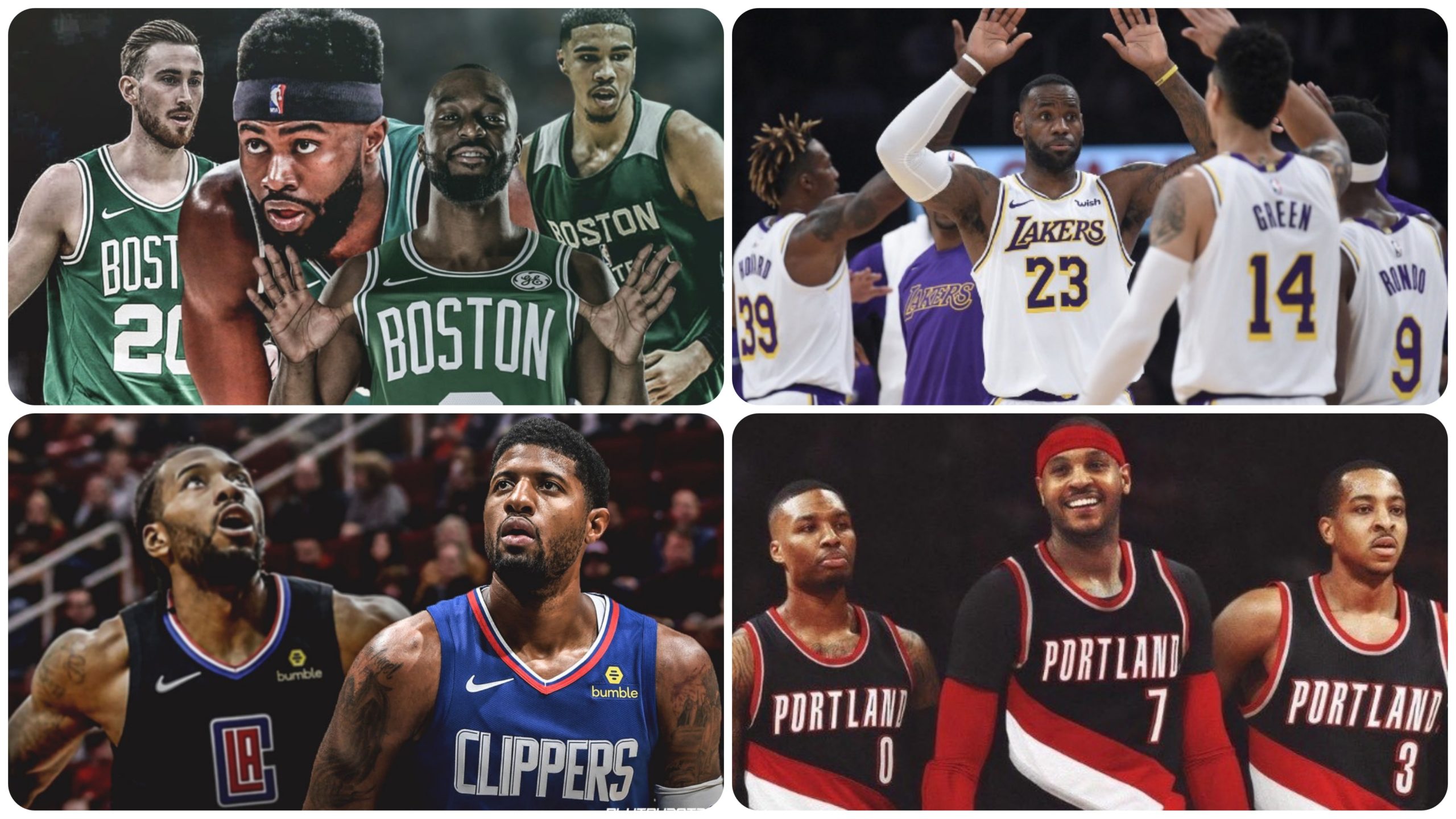 The Lakers and Celtics rivalry is in it's 71st year and it's back, should Carmelo Anthony debut in Houston, and how dangerous will Paul George and Kawhi Leonard be versus the Oklahoma City Thunder?

The Lakers-Celtics Rivalry is Back: The Motorola Razr, the remakes of Top Gun and all things 1980s are making a comeback this year. Count the Los Angeles Lakers-Boston Celtics rivalry amongst those in the comeback category. With their win over the Atlanta Hawks last night, the Lakers regained the title of league best from the Celtics, who lost the honor to the Sacramento Kings, who snapped Boston’s 10 game win streak last night. These are two of the most storied franchises in NBA history, and if the season thus far holds true all season long, we could be seeing the reignition of a prolific rivalry. These two teams have met in the post-season 12 times from 1959 to as recently as 2010. I once bet my cocky ass roommate, Andy Johnson, paycheck for paycheck on the 1987 NBA Finals and took his $1837 paycheck with no hesitance (that was the beginning of the ‘T-Money’ Era). These two teams first met on November 9, 1948 with the Celtics winning by 22 points, 77-55. The last meeting back on March 9th, earlier this year in the Staples Center, where the Celtics won again, 120-107. Their next meeting is January 20, 2020 at Boston’s TD Garden. Hoping to see them in next June’s NBA Finals. Boston leads the all time series, 203-161.

Will the Blazers Debut Anthony in Houston or Will They Just Keep it ‘Melo?: Dare the Portland Trailblazers start Carmelo Anthony in the arena in which he last played professional basketball more than a year ago? It would seem the apropos thing to do, given that the Blazers could use any animus Anthony has with the Houston Rockets as a springboard to an otherwise improbable win against a team that features the league’s leading scorer. James Harden is scoring at a 39.5 point per game clip, but has fired off six 40+ point games, including three in a row against Minnesota, Indiana and the Clippers (49, 44, 47). Harden has shown he can get along with a hot headed, ball centric player with former teammate Russell Westbrook. So was Anthony the problem so many have thought him to have been in Houston? He’s Portland’s problem now; we’ll see if a year off has taught him any humility. Would be nice to see him debut against Houston, but it will likely be later in the week versus the New Orleans Pelicans.

PG-13 and the Oklahoma City Thunder: Paul George welcomes his former team to town tonight, though after pre-game dinners and pre-introduction formalities, I’m certain it will be game on and at least a 30 point welcome from George to his Thunder buddies tonight. Kawhi Leonard has also milked the load management for the past two games, so the two playing together for the first time tonight would be a sight to see. They scored 150 in their last outing without Leonard; if he plays tonight, we could see a much higher final score from L.A. Clipper fans deserve that after Leonard has sandbagged the team to an 8-5, sixth place start.

Cleveland, Ohio – The Philadelphia 76ers beat the Cleveland Cavaliers for the second time in five days. #VFL Tobias Harris led the team with 27 points, five rebounds and four assists. Joel Embiid and James Ennis III added 14 points apiece, Furkan Korkmaz had 13, Al Horford finished with 11, six and seven, and Ben Simmons had 10 points and dished out 11 assists. Philadelphia shot 54 percent from the field. The Sixers barely beat the Cavs last week in a one-point final. The Sixers are back home for the next three games.

The Cavaliers were led by Collin Sexton’s 17 points. Jordan Clarkson chipped in 15, Kevin Love and Tristan Thompson had a dozen each, while Darius Garland rounded out the scoring with 11 points. Thompson also led the team in rebounding and assists, along with Clarkson. Cleveland heads out for a three-game road trip in New York, Miami and Dallas this week.

NEXT UP
Cavaliers at Knicks – Tonight
Knicks at Sixers – Wednesday

Orlando, Florida – As he’s shown us in the last three games, Bradley Beal can still light ‘em up with the best of them. Unfortunately he’s on a team where none of it matters if it doesn’t translate to wins, and the Washington Wizards are 3-7 in their last 10 games. During that stretch, Beal has scored 312 total points, including a 46 point effort against Houston, and a pair of 44 point games headed into last night’s 34 point performance.

The Magic haven’t been much better, certainly not consistent, despite winning three in a row and four of their last five games. Nikola Vucevic led Orlando with 30 points, 17 rebounds and six assists. Evan Fournier added 25 points in the win, Markelle Fultz finished with 19 and Terrence Ross had 15. Aaron Gordon chipped in 13 and nine on the night, and D.J. Augustin matched Gordon’s 13 points as the Magic shot just under 50 percent in the win. They are still a game under .500 13 games into the season.

Sacramento, California – The Boston Celtics felt like last year’s Toronto Raptors for a slight moment, as they watched Marcus Smart’s game winning shot bounce around the rim … then it fell off. No bucket. Sacramento wins. Boston’s 10 game win streak is over. Smart finished with night with a modest five points, five rebounds and nine assists. Jaylen Brown led the team with 18 and eight in the loss. Kemba Walker finished with 15, Daniel Thies hit a double double with 14 and 10, Jayson Tatum would match that 14, Semi Ojeleye finished with 11 and Enes Kanter had 10 and seven on the night.

Buddy Hield led the Kings in the last two games against the NBA’s top two teams, coming oh so close against the Lakers in L.A. in a two point loss with 21 points, before destroying those numbers back home against the Celtics last night with 35 points. Harrison Barnes added 13 last night in the win, the Kings’ fifth of the season and third in their last five games. Nemanja Bjelica and Bogdan Bogdanovic added a dozen apiece, while Richaun Holmes added 11 rebounds and Bogdanovic 10 dimes.

NEXT UP
Celtics at Suns – Tonight
Suns at Kings – Tuesday

Memphis, Tennessee – It was Jamal Murray’s night to shine under the lights on Beale Street, as the Denver Nuggets went to .750 and third in the Western Conference standings with a 17 point win in Memphis last night. Murray has 39 points, four rebounds and eight assists to lead the Nuggets. Paul Millsap chipped in 23, Juancho Hernangomez came up with 15 points off the bench on 83.3 percent shooting, and Jerami Grant finished with 12 points, four rebounds, and five assists. The Nuggets shot 55 percent in the Grizzlies’ den. The Nuggets have their next four games at home in the Pepsi Center.

Jaren Jackson, Jr. led the Grizzlies with 22 points and five rebounds. Brandon Clarke came off the bench with 19 and five, Jonas Valanciunas had 16 and 10, Ja Morant finished with 13 points, and De’Anthony Melton popped for 10 off the deep bench. Valanciunas has reached double figures in 12 consecutive games – now if they can just learn to translate his consistency into wins.

NEXT UP
Warriors at Grizzlies – Tuesday
Rockets at Nuggets – Wednesday

New Orleans, Louisiana – The bottom of the Western Conference got together last night below sea level in New Orleans, with the Pelicans surviving just above the water line against the Golden State Warriors, now without D’Angelo Russell. J.J. Redick was inserted in the starting lineup and took advantage with eight of 16 shooting to lead the Pelicans with 26 points. Jrue Holiday added 22 points, eight rebounds and nine assists. Nickeil Alexander-Walker had another nice outing with 19, Nicolo Melli had 16, and it was 10 apiece for both Jaxson Hayes and E’Twaun Moore. The rookie Hayes also had 10 rebounds.

With Russell out now, too, it was Eric Paschall’s game with a game high 30 point night. Ky Bowman added 19, Glenn Robinson III finished with 14 and six, and Marquese Chriss ended up with 10 and seven. Draymond Green – the last man standing – finished the night with a meager seven points, six rebounds, four assists, and three turnovers. The Warriors have three more games on this road trip.

NEXT UP
Warriors at Grizzlies – Tuesday
Blazers at Pelicans – Tuesday

Los Angeles, California – After the Los Angeles Lakers broke open a 21-5 lead in the opening quarter of last night’s game against the Atlanta Hawks, I turned it off and went to bed. I never like to see the outright massacre of an endangered species. The Lakers would go on to outscore Atlanta 69-41 in the first half en route to their 11th win of the season. LeBron James would lead all scorers with 33 points, seven rebounds, and 12 assists. Kyle Kuzma again finished second behind James with 17, it was 15 for Rajon Rondo, Anthony Davis added 14, Kentavious Caldwell-Pope had 13, and it would end up 11 apiece for both Danny Green and Alex Caruso. Dwight Howard would finish with a team-leading nine rebounds, but only two points.

Trae Young almost caught James in points, but certainly not performance or leadership. He finished with 31 points and seven assists for the flailing Hawks. Cam Reddish would add 13, and it was 11 apiece from Jabari Parker, DeAndre Hunter, and Allen Crabbe. Parker would lead the Hawks with eight rebounds, but the Lakers outrebounded Atlanta by seven, and outshot Atlanta 52 percent to 43 percent. This was the last of Atlanta’s five game road trip, where they went 1-4, losing to both L.A. teams, Phoenix and Portland. Their only win came at Denver, by four. The Hawks are 2-8 in their last 10 games.

NEXT UP
Thunder at Lakers – Tuesday
Bucks at Hawks – Wednesday