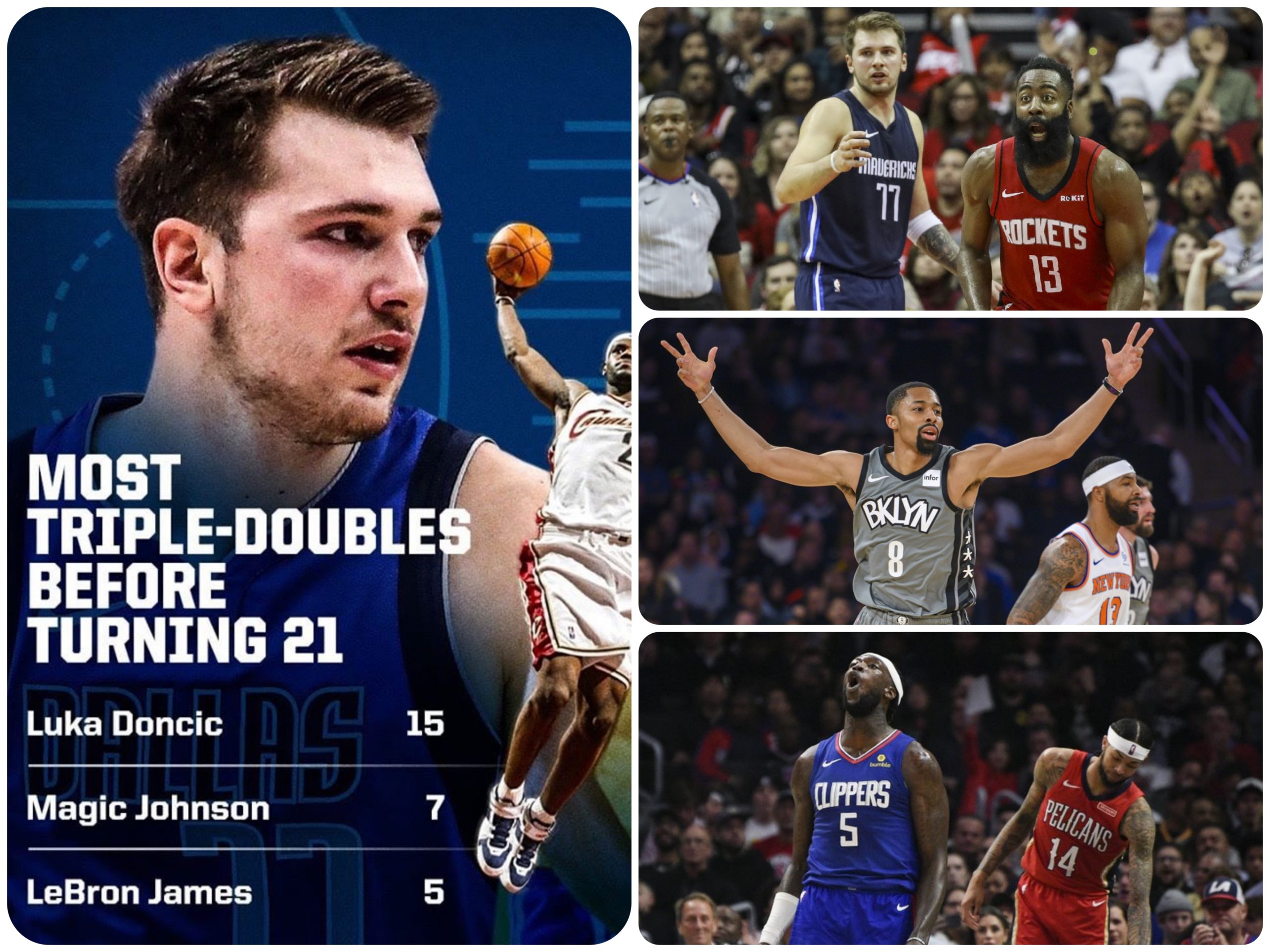 Luka Doncic's game is doing the talking when it comes to MVP consideration, charting the Rockets' three-game re-entry burn, and the Clippers unleash The Beast on the Pelicans.

Are the Lakers following the Alabama and Ohio State scheduling pattern? Are these wins real?

At 14-2, the Los Angeles Lakers are off to one of the best starts in their franchise’s history. But how many of those 14 wins are credibly real? I mean they all count in the win column, but who have they played, really?

They lost on Opening Night to the Los Angeles Clippers without Paul George, 112-102, a game after which Danny Green may have asked Lakers management for more shooting help, despite having LeBron James and Anthony Davis on the roster.

They also lost at home versus the NBA Champion Toronto Raptors, who were without their Finals MVP Kawhi Leonard .. because he’s now in Los Angeles … and with the Clippers, where he scored 30 in the Game One win over the Lakers.

When do we get to the tough part of the schedule?

The month of December looks especially challenging for the Lakers as they start playing teams with winning records, including a rematch with both the Mavericks and Heat, who are both much improved. They have Denver twice, Mavericks twice and a Christmas Day rematch with the Clippers, who now have both Leonard and George ready to go.

Where do you think the Lakers will be heading into 2020?

Butt Ugly Stat of the Weekend

LeBron Raymone James, tell me what in the name of the late James Naismith hell is this stat?

Do you let your kids see this stuff? You’ve got a tough month of December … can’t let ish like this happen if you’re taking the Lakers to the NBA Finals …

Houston, Texas – The Houston Rockets are going through that critical re-entry burn as they fall out of orbit and back in with the rest of the regular NBA. After reaching an 11-3 apogee, the Rockets have tumbled in three straight losses, from second in the Western Conference to sixth.

James Harden nearly pulled of the triple double effort last night, finishing with 32 points, nine rebounds and 11 assists. Russell Westbrook added 27 points, while Clint Capela had 21 points and 22 rebounds, 12 on the defensive glass. P.J. Tucker and Danuel House, Jr. each had 16 points, with every starter scoring, but getting only 11 combined points from the seven players off the bench.

Dallas’ horsepower came once again from odds on MVP favorite Luka Doncic, who also flirted with another triple double performance. Doncic finished with 41 points, six rebounds and 10 assists. Tim Hardaway, Jr. added a season high 31, Kristaps Porzingis added 23 and 13, Dorian Finney-Smith had 12 and 10, and it was 11 points for Maxi Kleber. Dallas has scored 137+ in their last three games and won five in a row.

NEXT UP
Clippers at Mavericks – Tuesday
Heat at Rockets – Wednesday

Just Like Free Agency, Battle of NYC Goes to Brooklyn

New York, New York – In the raucous back and forth between New York Knicks and Brooklyn Nets fans, the Nets win Round Two. When was Round One? When the Nets ‘stole’ Kevin Durant and Kyrie Irving away over the summer and New York had to sign 13 power forwards.

Spencer Dinwiddie, who did most of the high level recruiting of Irving, led the team in Irving’s absence once again with a 30 point performance. Jarrett Allen finished with 18 and 10, while Taurean Prince had 14 and 11. Joe Harris added 13 and Garrett Temple had a dozen for the Nets. Irving (right shoulder) is missing at least two more games – coincidentally (?) his return trips to Cleveland and Boston.

Marcus Morris was huge this weekend, but all in losing efforts. He had 26 points and four rebounds against the Nets. Julius Randle finished with 15, eight and four, Wayne Ellington found his way to a dozen, and Dennis Smith, Jr. finished with 10 and five. The Knicks were without R.J. Barrett (sick). The Knicks have a tough road ahead with Toronto, Philadelphia, Boston, Milwaukee and Denver yet to come on their slate.

NEXT UP
Nets at Cavaliers – Tonight
Knicks at Raptors – Wednesday

Kings Get by Wizards, Inch Closer to .500

Washington, DC – The Sacramento Kings are actually within a game of the .500 mark for this season, a mark they didn’t even reach after two games. In fact, the Kings didn’t get their first win until November 1st when they beat the Charlotte Hornets at home in Sacramento. They have the short handed Boston Celtics next, which could be anyone’s game. The Kings beat Boston 100-99 last Sunday in Sac. Could they do it again?

As long as people other like Harrison Barnes keep coming along and improving as the season goes. Barnes was seven of eight and led the Kings to victory last night in D.C. with a season high 26 point effort to lead all scorers, including Washington’s Bradley Beal, who’d been on a tear of late. Bogdan Bogdanovic added 21, Buddy Hield had 18, Richaun Holmes finished with 16 and 10, and Cory Joseph had 10 points and five assists.

Beal led the Wizards with 20 last night, along with eight assists. Isaiah Thomas had 17, Thomas Bryant finished up with 14 and eight on 70 percent shooting, and it was 12 apiece for Davis Bertans, Moritz Wagner, and Jordan McRae. Wagner also had 11 rebounds. Washington dominated the paint, but the Kings’ march to the free throw line was where they won the game.

NEXT UP
Kings at Celtics – Tonight
Wizards at Nuggets – Tuesday

Booker Has Off Night, Suns Go Down

Denver, Colorado – The Phoenix Suns outshot and outassisted the Denver Nuggets last night, but lost the game by getting outrebounded by 16, losing the three point shot count, and getting to the free throw line only about half as many times as Denver did. Can you say .500?

Cheick Diallo came off the bench to lead Phoenix with a 22 point night, shooting 83.3 percent and adding six rebounds. Dario Saric finished with 18 and 17, Elie Okobo had 16, Devin Booker finished with 12 points and five assists on a 38.5 percent night (14.3 from downtown), and Kelly Oubre, Jr. shot 33.3 percent and goose eggs from downtown to net just 10 points on the night.

Paul Millsap was a stitch better than Diallo at 23 points, thanks to a nine for nine performance at the foul line. Will Barton and Jamal Murray matched Diallo, and each other, with 22 points apiece. Barton had eight rebounds, Murray had seven. Mason Plumlee came off the bench for 14 and seven, while Monte Morris had 10 points in reserve. The Nuggets outscored the Suns 64-47 in a pivotal third quarter; Barton scored a dozen of his 22 in that quarter.

Clippers Release the Beast on Pelicans

Los Angeles, California – We still haven’t gotten to see the dynamic duo scoring machine as it was made out to be for the Los Angeles Clippers when they announced the pairing of Kawhi Leonard and Paul George. But the Clippers continue to win with other people stepping forward, which should be scary for other teams in the Western Conference and the NBA as a whole.

The New Orleans Pelicans tried to put their best foot forward, but may have exhausted themselves doing so in Salt Lake City a night earlier. Brandon Ingram once again led across the stat board with 24 points, eight rebounds and five assists, tying Lonzo Ball in dimes. Jrue Holiday had 18 and seven, E’Twaun Moore came off the bench for 17, J.J. Redick shot just 44.4 percent for 12 points, and Jahlil Okafor finished with just 10 and six. It was Ingram’s, Ball’s and Josh Hart’s first game back in the Staples Center since they were all Los Angeles Lakers – they’ll face the Lakers on Wednesday night.

Montrezl Harrell devoured the Pelicans with 34 points, tying his career high, and also had 12 rebounds, two assists, and two blocked shots. Leonard finished with 26, four and six, but shot just 36.8 percent on the night. George shot only 30 percent to get to 18 points. Lou Williams had 19 points off the bench, and Patrick Beverley finished with 10, seven and four.

NEXT UP
Clippers at Mavericks – Tuesday
Pelicans at Lakers – Wednesday