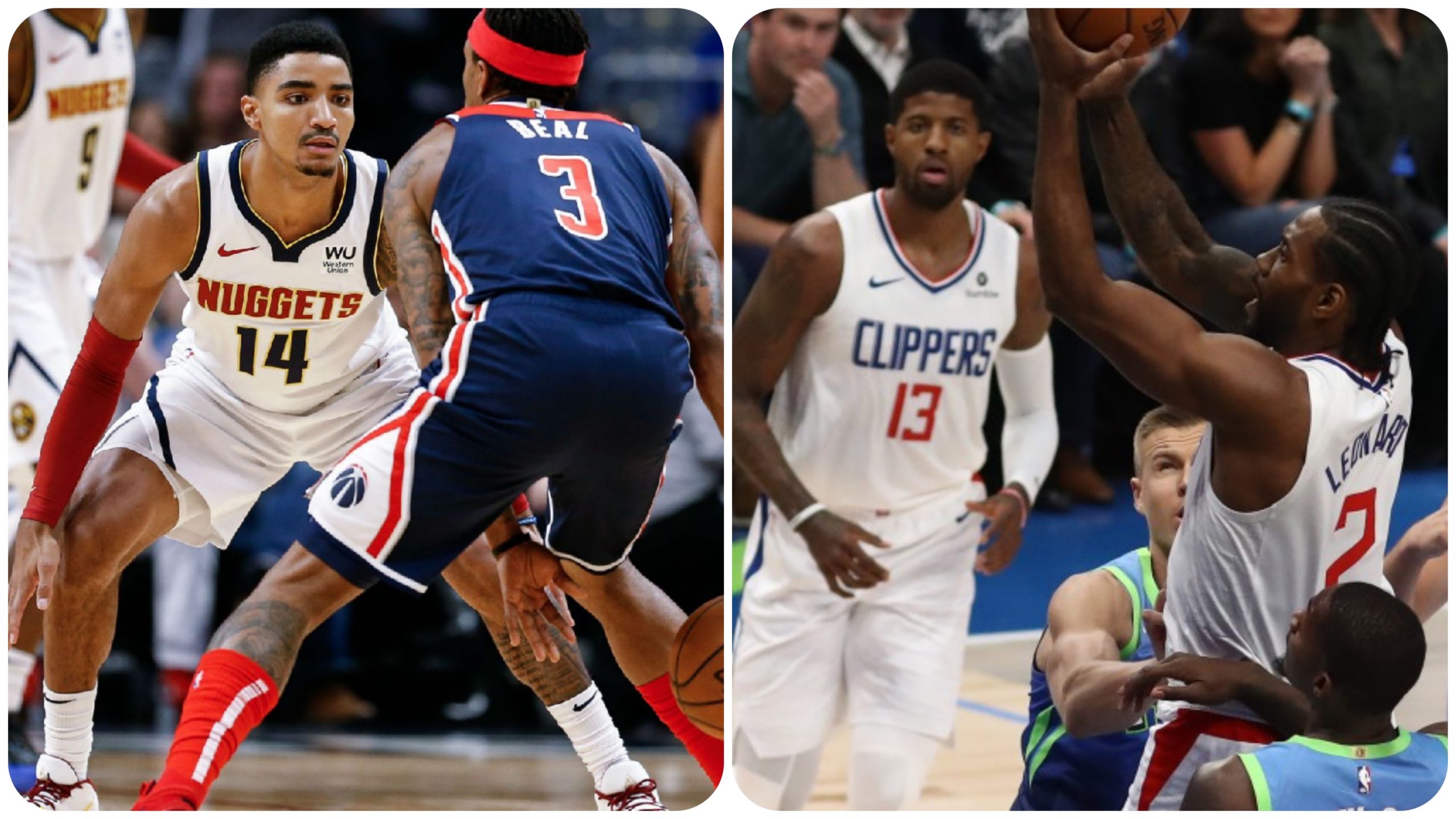 When did Chicago and New York fall out of favor with NBA players? We finally get to see Kawhi and PG-13 paired, and Gary Harris shuts down Bradley Beal.

Why Doesn’t Anybody Want to Play With Me?

It might be because you strongly believe this is true of you. Change your belief about it, and your attitude about it, because if you no longer hold this belief, no one else will either. Stand tall, smile, and behave as if life is wonderful and you are loving every minute of it.

This can be difficult if your name is Gar Forman, James Dolan, Jim Paxson, or Vivek Ranadive. The front offices and ownership of the Chicago Bulls, New York Knicks, and Sacramento Kings are like unattended dumpster fires, left to burn for up 20 years running in some cases, mainly because we – as fans – have become numb to it and expect these franchises to simply disappoint and fail season after season after season.

The league made $7.4 billion across all 30 teams last season. The Knicks are worth $3.6 billion at the top spot, but can’t draw any big name free agents. They can be in the NBA Draft lottery like a mofo though, can’t they?

The Bulls are in a similar situation when it comes to free agents, so like the Knicks, their value ($2.6 billion) means they’re overpaying average players, and not even the right ones if big name free agents don’t consider coming in to play alongside them for championship potential or even high dollar endorsement deals.

Oh, and the Kings come in right in the middle – No. 15 – worth $675 million, but facing the same issue with free agency and getting frustrated with legendary players’ coaches like George Karl and Dave Joerger. I believe they said of Karl when they dismissed him they tried to intimate that his .393 winning percentage meant he was incapable of reaching the players and that they needed ‘a new voice.’ No, they needed players that would listen to a legend like Karl, and not whine to management. They’re not the Sacramento Snowflakes … or are they? Joerger faced the same interference last year, though in his defense, Nemanja Bjelica is playing as good, if not better, than last year and no one’s up Luke Walton’s ass about it.

Sacramento’s plan at the time was to replace Karl with Vinny Del Negro, Jeff Hornacek, Kevin McHale, Patrick Ewing, Mark Jackson, or David Blatt at the time. That pick became Joerger, who was just as lambasted by management and ownership as Karl, except no one had the balls to interrupt Karl’s practices and tell him who was going to play and who wasn’t.

Seriously, has Ranadive been running the Kings based on a ‘Moneyball’ premise that he fell asleep watching on his office couch?

Maybe not Sacramento, but the cities of Chicago and New York used to be premiere, pre-eminent destinations for NBA free agents. Sacramento could be, too. (Okay, probably not, but I’m trying to encourage Vlade, not Vivek).

Are the seats being filled by ‘Friends and Family’ giveaways when they see they’re not even at half capacity the morning of the game?

Dolan just needs to sell the Knicks. He was one of the most hated owners in the NBA before Donald Sterling was forced out in L.A., and certainly has to hold that title outright since. The Nets are becoming the iconic team in New York where the Knicks had a stronghold for years. They’re beating N.Y. in revenue, merchandising, fan base, updated arena, and free agency – and they moved from New Jersey to do it, and are doing it well. Even the NBA’s events are held in the Barclays Center versus the legendary Madison Square Garden.

Chicago should have known it was up against the wall when they tried to sell tickets with Pete Myers in Michael Jordan’s old role. The only thing that came close to filling Jordan’s Jordans was bronze and concrete … in his statue … outside the United Center. Since Jordan – with the exception of the brief Derrick Rose period – the Bulls management hasn’t given the Chicago fans much to cheer about. With the pile of trash in the front office (that may be soon to being cleaned up), the Windy City hasn’t been the destination of choice it once was in the 1990s.

And forget Sacramento, who hasn’t had a team worth rooting for, buying merchandise for, or even mentioning on a daily basis since the Ranadive Brothers Barnum & Divac Circus planted stakes in town. Gone are the glory days of Rick Adelman, Chris Webber, Vlade Divac and Bobby Jackson. Been almost 20 years there, too; except no one pines to go to Sacramento without a fat check lying in wait, right Geoff Petrie?

To Mr. Dolan, Mr. Ranadive, Mr. Paxson and Mr. Forman, decide who you are going to be tomorrow.  Someone no one wants to be with, or someone who everyone starts gravitating to?

Do it slowly or go all out, though I suggest going all out as time is not your friend in some cases (see Forman) … and I don’t know who hires you if and when you are dismissed.

Figure out what else you need to change.

You might see ticket sales rebound and be able to turn your franchise(s) around.

The Pairing We’ve Been Waiting to See

Dallas, Texas – This was the Dyanmic Duo we’ve been waiting for since back in July, when Kawhi Leonard and Paul George kept the NBA world waiting with baited breath about their intent in 2019-20. We finally got to see their explosive potential last night, as they cut into the fantastic performance of this year’s Most Improved and Most Valuable Player candidate and his sidekick, Kristaps Porzingis.

Luka Dončić once again led the Dallas Mavericks in scoring, but not as magnanimously as in games past. The kid is averaging a near triple double at 30.1 points per game, 10.6 rebounds, and 9.8 assists, well above last year’s numbers and his career average. Last night, he had to settle for 22 points, eight rebounds, six assists, and three steals in the 15 point loss. Porzingis finished with 16 and 10, Seth Curry bounced back for 13, J.J. Barea had 12 off the bench, and Dwight Powell chipped in 10 points. The loss ended Dončić streak of four games with at least 30+ points and 10+ assists, and was Dallas’ first sub-100 game this season. It was also the third straight game without a triple double for Luka Dončić, who leads the league with seven.

But Leonard and George combined for 54 on 80.25 percent shooting, with Leonard carrying George’s shooting percentage for the second straight game. Leonard finished with a game high 28 points on 52.4 percent shooting, and had eight rebounds and four assists. George had 26, four rebounds, two assists, and six steals, his defensive skills picking up in L.A. where they left off in OKC (to be tested and refuted when the Clippers play Damian Lillard and the Portland Trailblazers next Tuesday in L.A.). Sixth Man Lou Williams came off the bench for 21, six and six, Montrezl Harrell had 12 and seven, and Ivica Zubac finished with 11 and seven.

NEXT UP
Clippers at Grizzlies – Tonight
Mavericks at Suns – Friday

Denver, Colorado – No one for the Washington Wizards played more than 30 minutes. That was Bradley Beal. No one for the Denver Nuggets played more than 28 minutes, with the exception of Will Barton, who logged 37 minutes. Welcome to ‘Rest Your Starters for the Thanksgiving Weekend’ Night at the Pepsi Center, where people who paid to see their favorite players play got to see them, but just not for very long. (And no one in Denver came to see the Washington Wizards play, unless the Bernie Bickerstaff family was there for ‘Dad Coached Both of These teams’ Night).

Jerami Grant led the Nuggets off the bench with 20 points, Barton finished with 17, eight and eight, Jamal Murray added 16, Mason Plumlee went for 15 and seven, Gary Harris had but 11 points though he played some amazing defense, and Monte Morris had 10 points and five assists in reserve. It was Denver’s sixth straight victory.

Washington hung tough, were it not for that second quarter, where they were outscored 39-24. Jordan McRae – like Grant – led in scoring in a reserve role. He finished up with a game high 21 points, four rebounds and three assists. It was 14 points apiece from Beal, Moritz Wagner and Davis Bertans, Troy Brown finished with 12, and Thomas Bryant had 10 points, eight rebounds, two assists, two steals and two blocked shots. Beal’s 14 was a season low as a testament to Harris’ smothering defense.

NEXT UP
Wizards at Suns – Tonight
Nuggets at Kings – Saturday