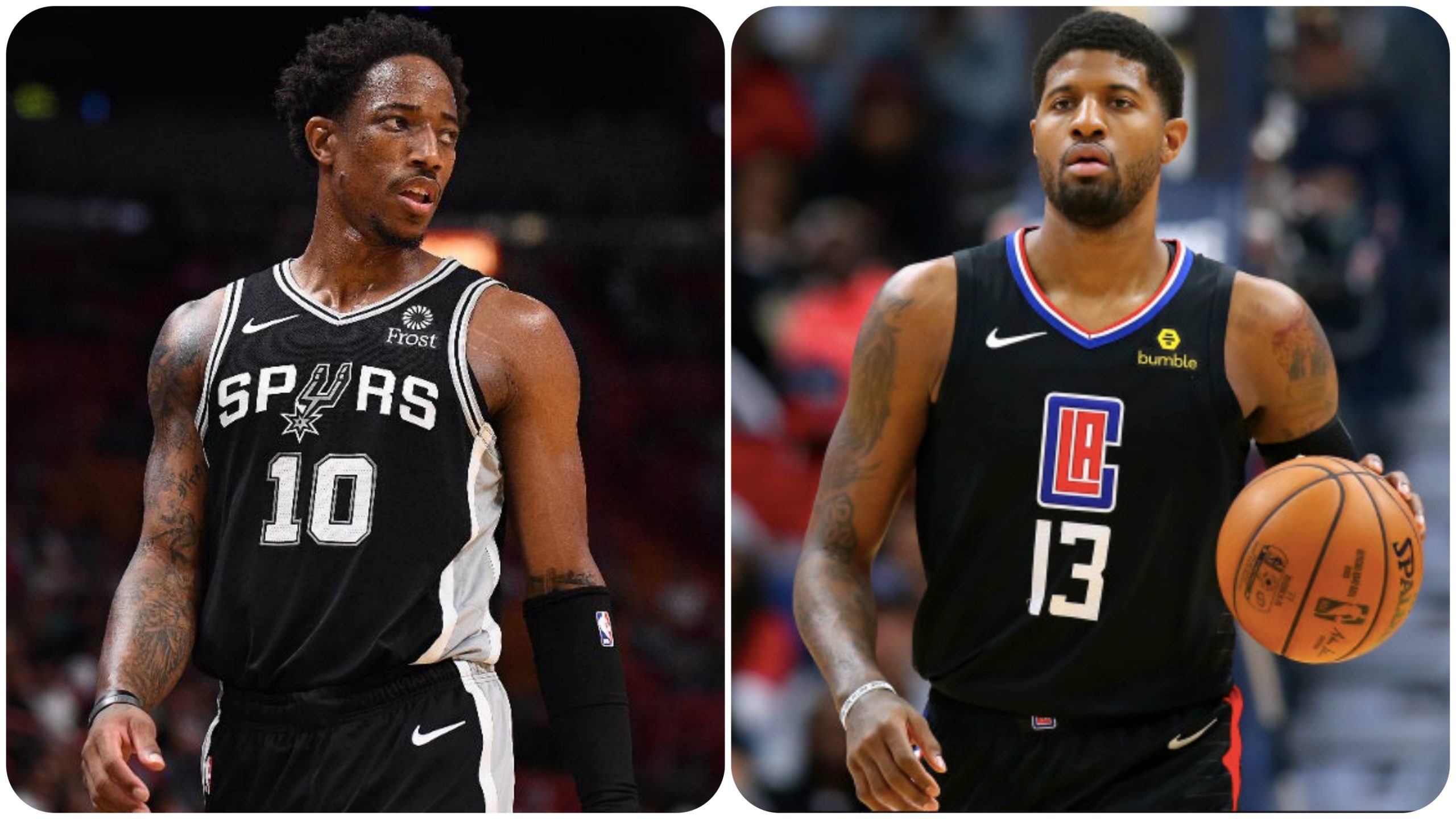 Was Paul George the right choice for Kawhi Leonard and the Los Angeles Clippers?

Bringing back an L.A. home boy was the design that Kawhi Leonard had all along, and he had his eyes on Paul George all along, with rumors reported that Geroge even had an infatuated fantasy of playing alongside Leonard as a San Antonio Spur. (That would have added 10 years onto Gregg Popovich’s coaching tenure).

But after an explosive 33 point debut in a loss to the New Orleans Pelicans, and then a 37 point night against the Atlanta Hawks which resulted in an L.A. win, George’s shooting percentage has taken a nosedive from 58.8 percent in those first two games back to a miserable 18.6 percent last night against those very Spurs, resembling something more like a warm, steaming chocolate pudding emoji than a guy making the 10th highest salary in the NBA at $33,005,556 … or $223,010.51 a shot so far through nine games.

Who would you have recruited – Paul George or DeMar DeRozan?

Is it too late to make a switch or does one need to be made?

Rumor is, DeRozan is available in trade talks with the Spurs sitting at 13 losses in 20 games.

Barclays Center – The Brooklyn Nets spent the summer signing Kyrie Irving and Kevin Durant to do nothing more watch courtside as Spencer Dinwiddie dismantled the Boston Celtics defense last night in the two teams’ second meeting in three days. Boston won the matchup in Beantown on Wednesday night. Irving has been out for the Nets’ last eight games with a sore shoulder.

Brad Wanamaker had 11 and eight for the Celtics, Enes Kanter had 10 and six. Joe Harris and Garrett Temple each chipped in 12 apiece for Brooklyn. DeAndre Jordan finished with eight points, 11 rebounds.

NEXT UP
Boston at New York – Sunday
Miami at Brooklyn – Sunday

Make That Nine in a Row

Little Caesars Arena – For the second time in three days, third time in a month, and nine times in a row, the Charlotte Hornets have had Detroit’s number. It’s 3-0 Charlotte this season and it isn’t even December yet. University of Kentucky rookie P.J. Washington exploded on the Pistons with 26 points, while Terry Rozier matched Derrick Rose’s 23 points to send the Pistons to their 13th loss of the season.

NEXT UP
Charlotte at Milwaukee – Tonight
San Antonio at Detroit – Sunday

Amway Center – The 2018-19 Toronto Raptors with Kawhi Leonard as their marquee guy began the season with 14 wins and four losses. The 2019-20 Toronto Raptors, minus Kawhi Leonard, have the same record. Coincidence? I find it rather remarkable. By the way, the Los Angeles Clippers with Kawhi Leonard as their marquee player are currently 14-6. Last night belonged to Norman Powell, however, as he led the NBA Champs to their 14th win in Orlando.

The Magic were so uneventful that only three Raptors needed to register double digits to beat them. Toronto outscored the Magic 26-12 in the third quarter, dashing another solid performance from Markelle Fultz in his comeback.

NEXT UP
Utah at Toronto – Sunday
Golden State at Orlando – Sunday

Love Returns to Get Run Over by Bucks

Rocket Mortgage Fieldhouse – The Cleveland Cavaliers scored 42 points in the third quarter. Would have been impressive if it weren’t for the fact that the Cavs scored 47 … in the first half … in their own crib. Milwaukee outscored the Cavaliers 67-47 in the first 24 minutes, giving them enough padding for Cleveland’s desperate 42-32 third and Milwaukee ran away with this before halftime, never looking back.

Donte DiVincenzo added 11 points, five rebounds, two assists and two steals, and Eric Bledsoe had 10, three and five for Milwaukee. Kevin Love came back to score 16 points, grab eight rebounds and dish seven dimes, Collin Sexton had 16 points, one rebound, five assists, and three steals, while Tristan Thompson threw down for 11 points and 13 rebounds in the loss, Cleveland’s 14th of the season.

NEXT UP
Charlotte at Milwaukee – Sunday
Detroit at Cleveland – Tuesday

Madison Square Garden – The New York Knicks have done it to their fans once again. After opening up with a 31 point first quarter, the Knicks fell off into an 83-64 slumber that cost them their chance at a fifth win this season, and a notable one against a strong team other than the Dallas Mavericks. Julius Randle, Marcus Morris and R.J. Barrett combined for 60 of the Knicks’ 95 points, but that was all the Knicks would muster, really, against one of the strongest teams in the Eastern Conference.

Frank Ntilikina added 13 and Damyean Dotson chipped in 10 points. The 76ers got 15 points, five rebounds, eight assists and two steals from Ben Simmons to push Philadelphia to its 13th win and fifth place in the East, 10 spots ahead of last place New York.

NEXT UP
Indiana at Philadelphia – Tonight
Boston at New York – Sunday

Bankers Life Fieldhouse – Atlanta’s Trae Young found another level last night in Indianapolis, ratcheting his scoring up to a career high matching 49 points and passing the 2,000 point mark all in vain as the Indiana Pacers found a way past Young’s performance and eked out a one point win in overtime.

T.J. Warren and Malcom Brogdon each added 16 points to fuel the Pacers, with Warren hitting the game winner in overtime to give Indiana its 12th win of the season, pushing them to .667 through 18 games.

NEXT UP
Atlanta at Houston – Tonight
Indiana at Philadelphia – Tonight

Heat Cooking by Mixing in New Ingredients with Seasoned

American Airlines Arena – Every game for the 13 and five Miami Heat this season has been led by another person, almost a different person every game. Last night, it was Goran Dragic’s turn as he led the Heat to their eighth win at AmericanAirlines Arena, spotless at home this year. A 41-21 first quarter scorching of the Golden State Warriors was all it took.

Jimmy Butler added in 16 points, five rebounds, six assists, and two steals for the Heat, while Kendrick Nunn popped for 15. Golden State continues to trudge along with visions of ping pong balls in their heads, losing No. 16 this season. Willie Cauley-Stein added 14 and six, Omari Spellman had 12 and four, and Marquese Chriss finished up with 10 points, five rebounds and six assists in the loss.

NEXT UP
Golden State at Orlando – Sunday
Miami at Brooklyn – Sunday

Chesapeake Energy Arena – The Oklahoma City Thunder took a 62-53 lead into the locker room at halftime, only to have to orchestrate a 30-20 fourth quarter to remain alive and beat the visiting New Orleans Pelicans. New Orleans reasserted themselves in the game by outscoring Oklahoma City 31-17 in the third quarter, but Dennis Schroder came alive in the final stanza with nearly half of his 25 points in the quarter to ensure the Thunder walked out with their heads held high.

Steven Adams added 14 points and 12 rebounds, while Shai Gilgeous-Alexander finished up with 10. For New Orleans, they had seven line up with double digit scoring. In addition to their top three, Jrue Holiday matched Jahlil Okafor’s 14 points, E’Twaun Moore finished with 13 and seven, rookie Jaxson Hayes added 11 and seven, and Josh Hart finished with 10 points, four rebounds, two assists, and one steal.

NEXT UP
Oklahoma City at New Orleans – Sunday

FedEx Forum – The first time Mike Conley came back to Memphis after this summer’s move to Utah, he dropped 15 points, three rebounds and four assists in a one point Utah loss back on November 15th. Last night, the Jazz returned to the scene of the crime and Bojan Bogdanovic picked up where Donovan Mitchell left off from the first game, and pushed Utah past Memphis to even the season series at a game apiece.

Conley was quieter last night, going eight, seven and four against his former team. Royce O’Neale had 10, six and four in the Jazz’s 12th win of the season. Conley’s replacement, Ja Morant, matched Dillon Brooks’ 11 points, but only shot 30.8 percent for the Grizzlies, who dropped unlucky No. 13.

NEXT UP
Utah at Toronto – Sunday
Memphis at Minnesota – Sunday

George’s Slump Helps Spurs Get Back on Winning Track

AT&T Center – The Los Angeles Clippers waited a good three weeks this season to get Paul George on the hardwood and get him assimilated with the team, and the guy who recruited him, Kawhi Leonard. Fans are going to have to wait a little longer than expected, as the Clippers fell to the surprisingly slumping San Antonio Spurs last night on the road, putting themselves 3.5 games back of the team they beat to start the season so promisingly.

Patty Mills (13 points), Bryn Forbes (12 points) and Trey Lyles (10 points) chipped in a combined 35 points to help the San Antonio starters to the win. L.A. only got 10 and five from Patrick Beverley. George only had five points and eight rebounds in 33 minutes of action.

Talking Stick Resort Arena – Dallas Mavericks second year point forward Luka Doncic had a simple message for himself, his teammates and his fans after the Maverick’s loss to the Los Angeles Clippers at home Tuesday night: ‘Bounce back.’ Well, he heeded his own advice and the Mavericks followed suit on the road against the Phoenix Suns last night, shutting down Devin Booker and Kelly Oubre, Jr. while stampeding the Suns on the offensive end.

After being tied 89-89 after three, the Mavericks outscored the Suns 31-24 in the fourth to take the road win. Kristaps Porzingis had 13 rebounds, but only two points, shooting a goose egg from the field and going two for two from the free throw line. Phoenix got 17 and seven from Aron Baynes and Mikal Bridges added 11 in the Suns’ 10th loss this season.

NEXT UP
Dallas at Los Angeles – Sunday
Phoenix at Charlotte – Monday

Yeah, ‘Melo Got His Groove Back

Moda Center at the Rose Quarter – Since my younger brother told me he was going to take my nephew Noah and niece Elianna to their first Blazer game and sit baseline, just chairs away from where the late Paul Allen used to sit, I hoped they’d get to see a great game from Damian Lillard, C.J. McCollum and Carmelo Anthony. I’m positive they weren’t disappointed, judging by the look on my niece’s face.

But the star of the show may have been Hassan Whiteside, who finished with eight points, but 15 rebounds and 10 blocked shots. Sitting under the stantion had to have been exhilarating for my family. Best place when anyone has a night like that. Rodney Hood also chimed in with a 19 point night, along with Anthony’s double double. Chicago got a dozen out of Tomas Satoransky, along with eight assists in the loss.

NEXT UP
Chicago at Sacramento – Monday
Portland at Los Angeles – Tuesday

Staples Center – Too much Anthony Davis. Too much LeBron James. Too little in response. Too bad the Washington Wizards were never successful in either of Kevin Durant’s free agencies to lure him to his home of Seat Pleasant, Maryland, as was the unofficial, unspoken (and thereby deniable) plan when the Wizards inked Scott Brooks as their coach. We may have seen a more competitive game than the 22 point embarrassment the Wizards put forth last night.

Bradley Beal, who’d been on a scoring tear the last couple of weeks was held to 18 points on 38.5 percent shooting. The only help he got was Gonzaga rookie Rui Hachimura, 13 points apiece from both Jordan McRae and Ish Smith, and a minor contribution from Isaiah Thomas (10 points). JaVale McGee added 15 and 11 for the Lakers, Rajon Rondo kicked in 13 points, and Danny Green hit for 11 in the Lakers’ league leading 17th win.