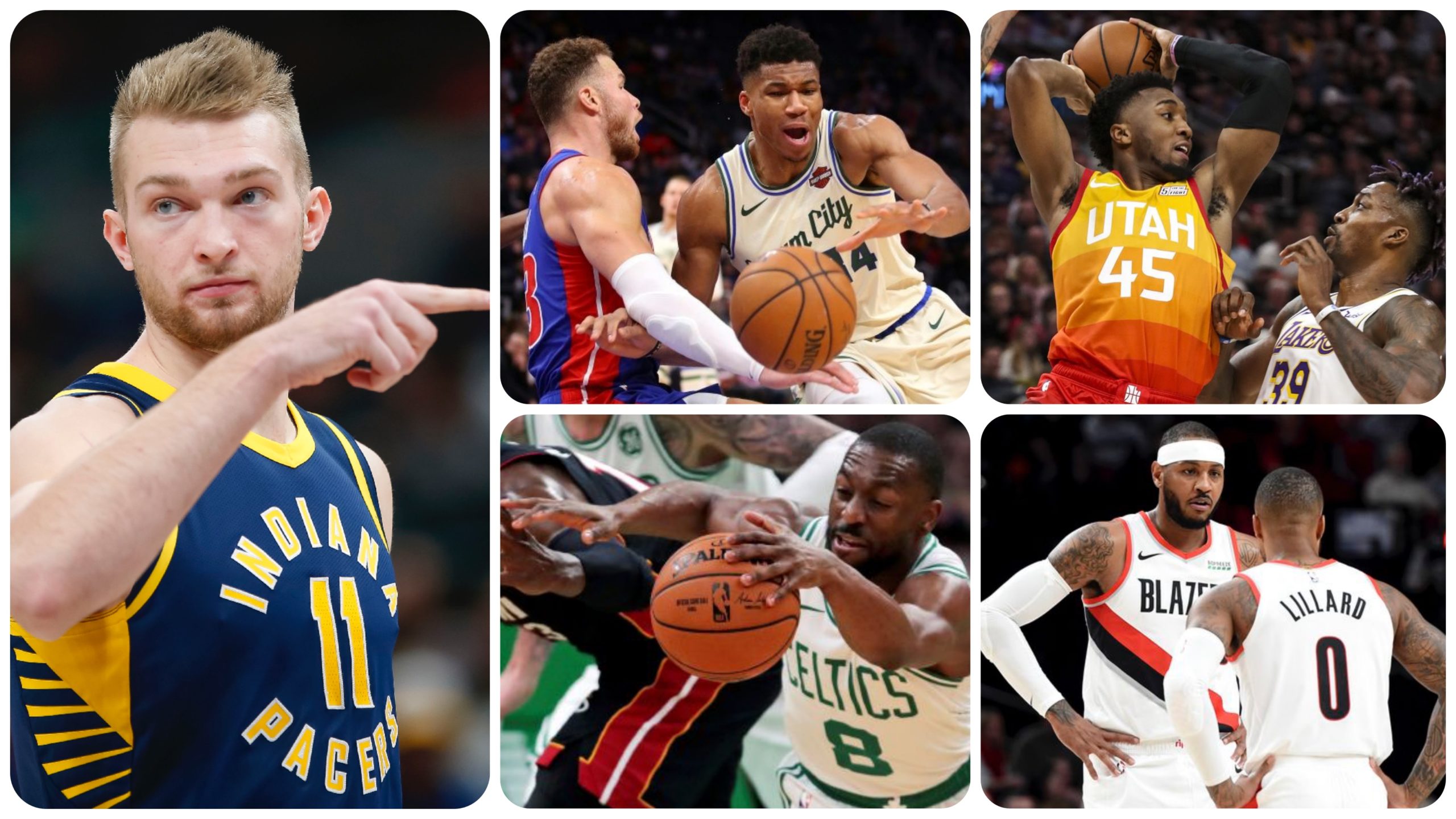 Does Sam Presti wish he had Domantas Sabonis back? Also, L.A. is speed metal to Utah's Jazz, Bucks win 13th straight, and Portland has its best game to date.

The One That Got Away

Every general manager has that one player that they wish they could have kept ahold of.

For Oklahoma City Thunder general manager Sam Presti, that player has to be Domantas Sabonis.

Sabonis’ brief stay with the Thunder began when his draft rights were traded to the Thunder along with Victor Oladipo and Ersan Ilyasova for Serge Ibaka, after being selected 11th overall by the Orlando Magic. A year and two weeks later, Presti dealt Sabonis and Oladipo to the Indiana Pacers for what amounted to be a two year rental on Paul “I’m here to stay” George.

Though Sabonis and Oladipo never outwardly voiced any displeasure with the Thunder for the move, Sabonis has let his play do the talking.

This season, he’s running over his career averages, currently posting a 18.4 ppg, 13 rebound average, and 3.8 assists, up seven plus points, up nearly six rebounds, and double his assists.

Against the Thunder, he’s played very consistently well, though he was used sparingly at first, due to his lack of experience under head coach Nate McMillan. But in 2019 – adjoining this season and last season – you’d have to be blind not to see Sabonis’ improvement and his value as an asset.

You’d have to think that Presti would want those stats, that grit and determination, and improvement like that back in Thunder blue.

Of course, he’d like to have had James Harden’s production and numbers too, but didn’t think Harden was worth the money he was asking. (Harden is the fourth highest paid player in the league at $38,199,000 this season and set to crest $41 million next season).

Sabonis is 248th in the league in salary at $3,529,554, but set to make $18.5 million a year over the next three seasons. If Indiana is foolish enough to underappreciate him or let him hit the trade market, Presti has to consider bringing him back to OKC.

The Detroit Pistons got a taste of their own medicine, getting throttled by 24 points in their own crib by the NBA best Milwaukee Bucks. Detroit only scored 24 in each of the first three quarters, while Milwaukee put together 92 points in that time frame to take a very comfortable 20 point lead into the fourth. Milwaukee has won 13 games in a row.

NEXT UP
Clippers at Bucks – Friday
Pacers at Pistons – Friday

Despite losing Nikola Vucevic until about Christmas, the Orlando Magic are on a mission, winning their fourth of their last five games. The Magic shot 57 percent to Phoenix’s 48 percent to get within a game of .500 last night. Both teams are eighth in their respective conferences.

NEXT UP
Suns at Pelicans – Thursday
Magic at Cavaliers – Friday

D’Angelo Russell returned and the Golden State Warriors jumped out to an early lead and a respectable fight, but a 37 point second half left the crack in the door the Charlotte Hornets needed to swarm the Warriors, sending them to their 19th loss of the season.

NEXT UP
Warriors at Bulls – Friday
Nets at Hornets – Friday

Atlanta treated the home fans at State Farm Arena to a nice first quarter, but let a 13 point surge by the Brooklyn Nets in the second quarter take the wind out from under their wings as they plummeted to their 17th loss this season and there wasn’t a damn thing State Farm could do about it as all five starters for the Nets hit in double digits.

The Boston Celtics improved to 8-0 at TD Garden last night as Jaylen Brown scored a season high to push the Celtics a few notches above the Miami Heat in the Eastern Conference standings, despite a strong night from Jimmy Butler. The C’s are now second right behind the Milwaukee Bucks as Miami falls to fifth in the East.

NEXT UP
Heat at Wizards – Friday
Nuggets at Celtics – Friday

A strong second quarter by the Chicago Bulls and all of Chicago’s starters hitting in double digits helped the Bulls vanquish the visiting Memphis Grizzlies last night in the Windy City.

NEXT UP
Warriors at Bulls – Friday
Grizzlies at Jazz – Saturday

With the game on the line, Terrance Ferguson needs a little more practice at shooting in crunch time … or at least head coach Billy Donovan could have called a time out. Instead, the Indiana Pacers used a strong(er) 58-50 second half to down the Thunder at Chesapeake Energy Arena last night. Seven Pacers ended up in double figures.

NEXT UP
Pacers at Pistons – Friday
Timberwolves at Thunder – Friday

The Dallas Mavericks continue to assert themselves as one of the teams in the NBA to be reckoned with, behind strong play from Luka Doncic and Dwight Powell, as well as 41-30 closeout quarter last night against the upstart Minnesota Timberwolves.

NEXT UP
Timberwolves at Thunder – Friday
Pelicans at Mavericks – Saturday

If Utah is the Jazz, then the Los Angeles Lakers is speed thrash metal. Duke Ellington, meet Cannibal Corpse. L.A. cranked out a 65-47 first half to drown out the Jazz and never looked back in their start to finish 25 point beatdown last night in Salt Lake City.

NEXT UP
Lakers at Blazers – Friday
Grizzlies at Jazz – Saturday

Their record at 9-13 may look uglier than Sacramento’s tidy 8-12, but the Portland Trailblazers’ percentage looks cleaner at .409 to Sacramento’s .364 after last night’s Blazer win in Portland, and it vaults the Blazers up to ninth place in the Western Conference standings. They’re headed in the right direction. Carmelo Anthony shot 50 percent for 20 points – and he was the fourth leading scorer on the team.

NEXT UP
Kings at Spurs – Friday
Lakers at Blazers – Friday