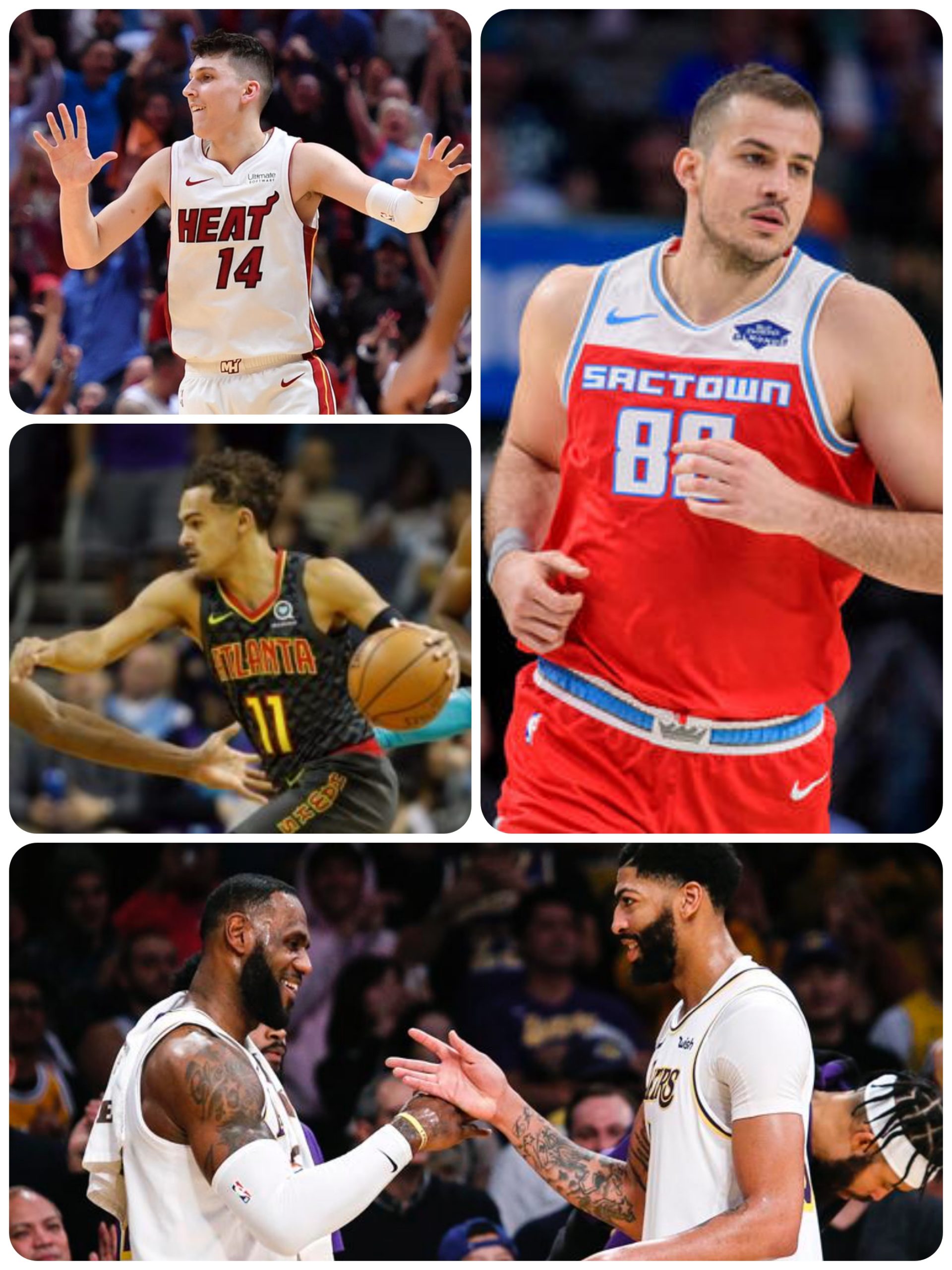 The Lakers are devouring teams with Anthony Davis hitting 50, Nemanja Bjelica and Trae Young each get 30 to help their teams win, and Herro is the hero in Miami.

If the playoffs started today

In the Eastern Conference, you’d have:

In the Western Conference, you’d have:

But under the George Karl model, if the playoffs were to begin today …

I think that the Top 16 is the only playoff seeding chance the NBA needs to make.

The Denver Nuggets have lost their second straight game, notably which has happened because outside of Nikola Jokic and Jamal Murray, no one else has shown up. Critical, because they play Philadelphia next. Meanwhile, the Brooklyn Nets have won three straight and still don’t have Ol’ What’s-His-Name back. Spencer Dinwiddie is coming into his own.

NEXT UP
Nuggets at Sixers – Tuesday
Hornets at Nets – Wednesday

It was Vintage Vince off the bench last night helping Trae Young, Jabari Parker and the Atlanta Hawks get back on the winning track in Charlotte. Vince Carter came off the bench for seven of nine shooting while Young had his 10th 30+ point game of the season. Alex Len also had 13 and 10 in the paint for the Hawks.

NEXT UP
Hornets at Wizards – Tonight
Hawks at Heat – Tuesday

If the Miami Heat were holding out for a hero, they got one in rookie shooting sensation Tyler Herro last night at AmericanAirlines Arena. Herro had three three pointers in the 13-8 overtime session, one at the end of regulation, and shot 45.5 percent, both from the field and from downtown to help the Heat to their 10th straight win at home.

NEXT UP
Raptors at Bulls – Tonight
Hawks at Heat – Tuesday

Is it me, or were the Toronto Raptors playing hungrier with Serge Ibaka and Kyle Lowry out and on the injured list? Toronto hasn’t been the same, they’ve seemingly lost their rhythm since those two returned to the lineup and Pascal Siakam seems to have relegated himself to the back seat as Philadelphia moved ahead of the Raptors in the Eastern Conference standings with last night’s win.

NEXT UP
Raptors at Bulls – Tonight
Nuggets at Sixers – Tuesday

Now that’s a little more like it. The way the Clippers played with both Paul George and Kawhi Leonard clicking like they did last night (only the second game this season like this) is why the Clippers will get their own arena, a separate identity than the Lakers, and finally flourish in their own right. The Clippers’ win moves them right up to the underbelly of their stepbrothers and roommates in L.A. and in the Western Conference.

NEXT UP
Clippers at Pacers – Tonight
Wizards at Hornets – Tuesday

Some poetic justice for former Kings head coach Dave Joerger, who believed in Nemanja Bjelica so much last year that it was one of the things that ultimately cost him his job. Last night, Bjelica scored a career high 30 points on the road in Dallas to beat the Mavericks, while Marvin Bagley III still sits out, this year with a fractured right wrist.

The guard corps of the Oklahoma City Thunder collaborated once again, and all of a sudden, your Oklahoma City Thunder are in the top eight of the Western Conference. Who’da thunk it? Chris Paul, Shai Gilgeous-Alexander and Dennis Schroder, that’s who, as the trio combined for 62 points in the win of their first game of this current road show. They get the Jazz in Utah tonight. Carmelo Anthony, after netting his guaranteed money, had another chocolate pudding emoji night, shooting 22.2 percent for nine points.

NEXT UP
Thunder at Jazz – Tonight
Knicks at Blazers – Tuesday

Oh, you can throw eight players with double digit scoring at the Los Angeles Lakers if you’d like, but when Anthony Davis and LeBron James combine for 82 points, 11 rebounds, 19 assists, five steals and a blocked shot, it’s best to just get out of the way and let the big dog eat. Eat he did, as Davis’ 50 was a career high and the Wolves were nothing more than chew toys for the Lakers. Dwight Howard celebrated his birthday with the win, scoring eight and grabbing six, while Karl-Anthony Towns headed off to Phoenix with his tail between his legs.

NEXT UP
Timberwolves at Suns – Tonight
Lakers at Magic – Wednesday

The Rundown – 120819: Blowout Night in the NBA, Cavs Making a Beeline to Quit on Beilein
The Rundown 121019: Lakers’ Missing Piece, PG-13 Back in Indiana, Bjelica Kills Again