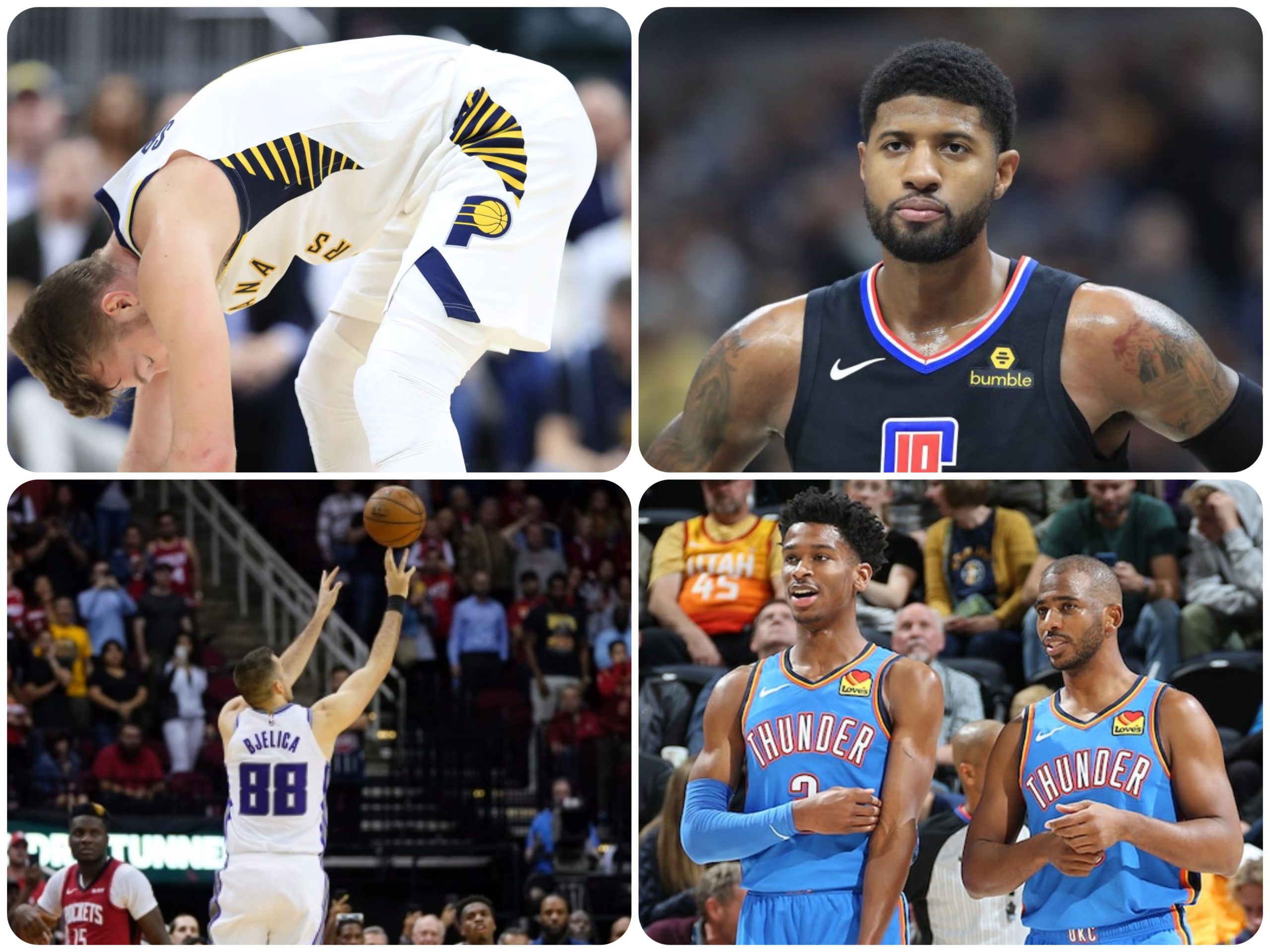 Indiana fans let Paul George know how they feel, he answers with 36 and a win - Nemanja Bjelica's game winner says "contest this," and the Thunder guard corps keeps exceeding expectation.

If the Los Angeles Lakers want to get to – and win – the NBA Finals this year, it’s going to be hard to argue or bet against LeBron James and Anthony Davis.

But eventually that duo is going to wear down.

And with the Ohio State Buckeyes in the BCS Final Four, going up against Clemson, I’m putting my money on LeBron James coming down with a pinched nerve, turf thumb, or some other ridiculous ailment to (1) take the time off he usually does from Christmas to Martin Luther King, Jr.’s birthday, (2) celebrate his 35th birthday on December 30th (also in that mysterious injury time frame), and (3) celebrate his Buckeyes, which he does every year while no one bats an eyelash.

It’s okay. The man’s put in over a decade and a half to NBA basketball. He’s arguably one of the greatest to play the game since Michael Jordan and prior to Luka Doncic. He deserves it.

And by the time LeBron’s 35th rolls around, the Lakers may be at upwards of 30 wins, but I personally think the Heat, Bucks, Nuggets, Clippers and Mavericks might have a say in that. The Magic (tonight), Hawks, Pacers, and Blazers are easy wins, so at least 25 wins. Is that enough for James to coast for 10 days?

If not, there’s always load management, right? I mean Kawhi Leonard took last night off and last year, in Toronto, Leonard followed a load management program last year that limited him to 60 regular-season games in 34 minutes per game.

It works. I’m wanting to try and run it past my boss at the office.

Back in LakerLand, the duo of Davis and James needs a solid third in the rotation to ensure playoff success. Eventually teams are going to figure out the Lakers’ game plan,, or at least let the duo score and shut down the rest.

Avery Bradley is set to come back into the rotation, but is he the answer? Bradley has been well-traveled since leaving Boston. Detroit, L.A. (Clippers), Memphis, and now with the Lakers, he doesn’t have the consistency the Lakers need. Kentavious Caldwell-Pope, Alex Caruso, Quinn Cook – each have had their moments, but none with any explosive staying power.

Even Danny Green has struggled and gone backward this year. We keep awaiting the emergence of Kyle Kuzma, but it’s looking more and more like Brandon Ingram learned more from playing alongside James in L.A. than my guy Kuz.

I don’t know, I highly even doubt, that David Griffin is up for another trade scenario with the Lakers, seeing as how the return on investment for Davis hasn’t fully taken shape yet.

But the Lakers’ fortunes for this year and beyond can be solidified if the team can swing a deal for Jrue Holiday. He and Davis had a solid relationship beyond their on court harmony (calm down, Dwight Howard – I’m talking about platonic friendship and trust here) and I think he may be the key to a championship ring for himself, Davis, and another for James.

After all, he’s still passing to Davis when they’re on the same court – last game proved that.

Griffin won’t take garbage, and it may take a third team to get such a deal done, but you could include Kuzma in a straight or three-team deal (i.e. moving Chris Paul to New Orleans on an “i’ve played there before” tour to teach those young Pelicans and adding Bradley, could unload that fiscal burden from OKC, Kuzma to OKC along with Jahlil Okafor, and Holiday to the Lakers). Maybe even try and include the Knicks and get Julius Randle back in a Laker uniform.

Imagine that – Jrue Holiday, Danny Green, LeBron James, Julius Randle, Anthony Davis. That’s a team I could get behind playing for an NBA Championship this year.

Or, you could just forget everything I just said and bring Chris Paul to the Lakers.

Of course, you know David Stern would come out of retirement to block that … again.

But taking a serious look at Jrue could give the Lakers and their fans a happy Holiday.

A 60-48 first half and a stellar night, seven three pointers en route to 36 points, from former Indiana Pacer Paul George was all the Los Angeles Clippers needed to net their 18th win of the season, while Kawhi Leonard sat out with another case of load management. It’s the first time the Clippers have won at Bankers Life Fieldhouse since January 2016.

Gordon Hayward picked a good night to return and test how healed his broken hand is – he shot 70 percent on the night, had five rebounds, four assists and a steal and the Boston Celtics put points up on the Cleveland Cavaliers in every quarter to win the game going away. The Cavaliers only had two players score in double digits and have seemingly truly quit on head coach John Beilein, but in essence quit on themselves and their fans.

That damned 34-21 third quarter – if the New Orleans Pelicans could just get that one back, they were in this thing in every other quarter last night in The Big Easy. Letting their foot off the gas just enough to allow the Detroit Pistons cruise by and steal the win, with Derrick Rose getting off 17 of his 21 points in the quarter and the game winner with 0.3 seconds remaining.

The Chicago Bulls played the Toronto Raptors as best they could play the reigning NBA Champions. Or, the Raptors played the Bulls way too closely for a championship team playing one of the worst teams in the league. I’m honestly starting to think that Fred VanVleet, not Pascal Siakam, is the heartbeat of the Toronto Raptors. VanVleet did not play last night due to a bruised right knee that shows no structural damage. Toronto ended their three game losing streak and beat the Bulls for the 11th consecutive time.

The Sacramento Kings are becoming Giant Killers. First, they knock off the Dallas Mavericks, and now the Houston Rockets in their Texas Two Step. With the Oklahoma City Thunder, New York Knicks, Golden State Warriors and Charlotte Hornets on the horizon, the Kings could be above .500 going into the week of Christmas. And games like this are why the Houston Rockets seem to struggle to reach that next stage of greatness. It may cost Mike D’Antoni the contract he seeks. I’m wondering how much Vlade Divac and Vivek Ranadive like/don’t like Nemanja Bjelica now. I think they owe Dave Joerger at least an apology.

The Milwaukee Bucks opened up a 52-40 first half and never looked back as they made the Orlando Magic vanish into thin air. The MVP, Giannis Antetokuonmpo, took full advantage of the paint being vacated with Nikola Vucevic out of the Orlando lineup until Christmas. The Greek Freak was two assists shy of a triple double as the Bucks won their 15th consecutive game in a row last night.

A 64-45 second half shooting clinic helped the Phoenix Suns silence the howl of the Minnesota Timberwolves last night in the desert. Minnesota took a 64-61 lead into the locker room at the half, but the Suns would shine in the second half and win a game for the first time since November 14th. The win also snaps a four game losing streak on their home floor.

Everyone counted the Oklahoma City Thunder out from the get go, losing both Paul George and Russell Westbrook, along with Jerami Grant and Patrick Patterson. Many, including this writer, thought the Utah Jazz might finally have what it takes to get to championship level basketball with the additions of Mike Conley and Bojan Bogdanovic, to go along with Donovan Mitchell and Rudy Gobert. Well, folks, with last night’s win in Salt Lake City, the Thunder are not only in the Western Conference’s top eight teams (their seventh), they are within 1.5 games of the Utah Jazz, at sixth place.

The Memphis Grizzlies shot 50 percent on the road last night in the Chase Center in San Francisco. Golden State shot 37 percent in their own arena and last their 20th game of the season, putting them at a league worst 5-20 (.200). Ja Morant returned from a four game absence nursing a sore back, but saw no ill effects last night in his team-leading performance. He shot 57.1 percent from the field and 60 percent from downtown in the win.