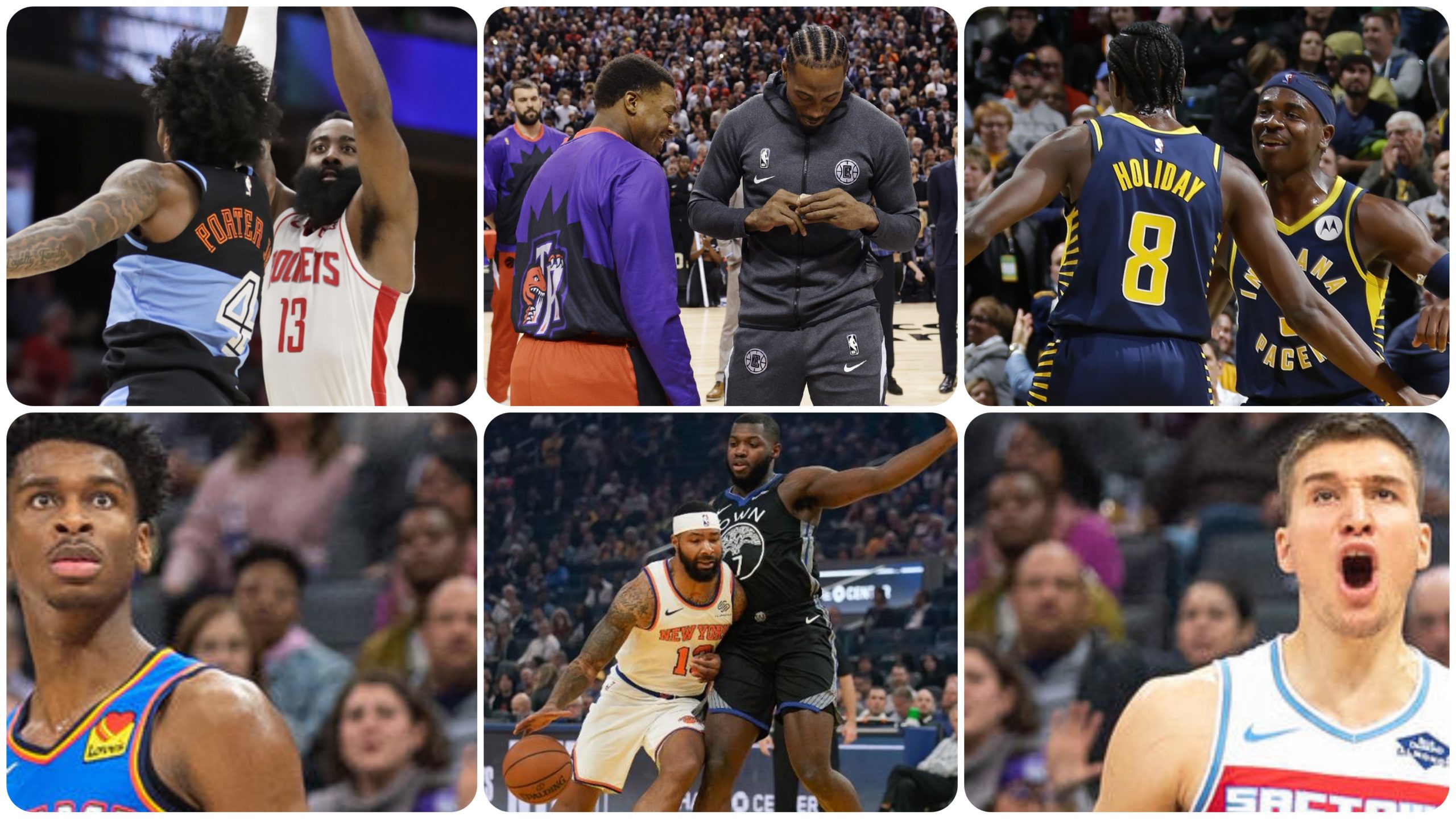 James Harden goes for 20 in the fourth to get 55, Kawhi Leonard gets his ring, it's happy Holidays for the Pacers, and the Kings do it again.

NBA Commissioner Adam Silver has been a blessing for the evolution of the NBA as a business model and as an entertainment medium.

Fans can access games through nearly every media device available – TVs, laptops, desktops, mobile devices, virtual reality, and beyond. But what has that done to actual attendance at games?

Too often, we can pull up a game on one of these many of our devices and see empty seats in many of these cities, even the largest of markets. New York, Chicago, and even though L.A. is going through a boon of success right now, last year was like Chicago and New York.

Even Orlando, who used to have one of the most humble arenas in the NBA when it was the TD Waterhouse. In 2010, the Rich DeVos family shelled out $480 million of laundry detergent revenues to build the Amway Center and has since rolled out an average or subpar product on the floor and in the front office since. (God, I miss Pat Williams).

That’s right – the game between the NBA’s two worst teams drew the third largest crowd last night. Sacramento nearly drew a full house and their opponent was a team that has the same record.

Now we all know that final attendance numbers are somewhat inflated; not all games are sellouts no matter what numbers reflect, but they were last night in San Francisco to the last seat, and we know everyone in Toronto wasn’t going to miss out on Kawhi Leonard’s first return to the city and arena since the team won their championship last June.

But these are fans (Toronto) who also stand packed outside the arena in what’s affectionately known as Jurassic Park.

Not all fans are as rabid, however, especially when they can get all the action from the comfort of their home, on a plane on their mobile device, cheaper snacks, dressed down, and no need for a designated driver after Nemanja Bjelica buries their team(s).

Tomorrow and Friday, I’ll look at ticket prices, concessions, and the need to cover the salaries of some very middle of the road players.

The fourth quarter lead seemed promising for the Cleveland Cavaliers. After three and a half minutes into the fourth, Cleveland had a comfortable lead that vanished as quickly as I rubbed my eyes in seeing it. James Harden then exploded for 20 points in the fourth quarter alone, saving the Houston Rockets from what would have been an embarrassing defeat.

NEXT UP
Cavaliers at Spurs – Tonight
Rockets at Magic – Friday

It was happy Holidays for brothers Aaron and Justin last night, as they paired up with Malcolm Brogdon and Domantas Sabonis (15 points, 14 rebounds, eight assists) to upset the visiting Boston Celtics. The second quarter proved to be the pivotal period with a six point advantage for the Pacers. Boston outscored the Pacers by 14 in the third to seemingly run away with the win, but Indiana raced right back in the fourth, outscoring the Celtics by 15 to take the checkered flag.

NEXT UP
Sixers at Celtics – Tonight
Pacers at Hawks – Friday

The Los Angeles Lakers turned to LeBron James to do what it took to get by the Magic in Orlando last night. James turned in another triple double performance as Anthony Davis decompressed from his 50 point night. Jonathan Isaac, the NBA’s leader in blocked shots this season, was limited to one against the Lakers.

NEXT UP
Lakers at Heat – Friday
Rockets at Magic – Friday

One minute, Kawhi Leonard was hugging his former teammates, coaches, general manager and ownership team and receiving his championship ring, getting the applause and love from the 20,144 in attendance at Scotiabank Arena. Shortly after that, he was showing the Raptors the kind of play that helped him and Toronto celebrate the city’s first championship last June. Pascal Siakam actually bested Leonard’s effort, but the Raptors are certainly missing the energy of Fred VanVleet. Paul George shot 21.4 percent for 13 points.

NEXT UP
Clippers at Timberwolves – Thursday
Nets at Raptors – Saturday

Attendance is flagging at the Barclays Center, with only 15,631 showing for the game versus the Charlotte Hornets last night. Of course, it’s understandable since neither Kevin Durant nor Kyrie Irving is playing. And the team is just barely two games above the .500 mark. Irving has now missed 13 straight games while Caris LeVert has been out 15. What they are missing is how Spencer Dinwiddie has become a star on his own as has Charlotte’s Devonte’ Graham, as he led the Hornets to a win last night. A 60-44 second half swarm gave Charlotte the win.

NEXT UP
Hornets at Bulls – Friday
Nets at Raptors – Saturday

Zach LaVine helped the Chicago Bulls end a three game losing streak last night at home by scoring seven of seven from downtown and leading the Bulls to a 34 point win over the visiting Atlanta Hawks. Already having the prognosis that Otto Porter, Jr. would be out at least another four weeks, LaVine put the team on his back and carried them to the comfortable win. Chicago outscored Atlanta 70-50 in the second half, held the Hawks to the teens in the second and fourth quarters, and held Trae Young to 28.6 percent shooting and 15 points.

NEXT UP
Pacers at Hawks – Friday
Hornets at Bulls – Friday

The Utah Jazz put together a 68-47 second half to pull away from the Minnesota Timberwolves, whose November put forth the perception that this team was a serious contender. However, as mirages will do, those of the Timberwolves have faded into a reality as harsh as the northern temps. The Timberwolves need another piece – DeMar DeRozan? – to compete in the Western Conference, where they’re sitting at 10th as of today.

NEXT UP
Warriors at Jazz – Friday
Clippers at Timberwolves – Friday

Just takes a little heat in the desert to wake a hibernating Grizzly and that was all Dillon Brooks and the Memphis Grizzlies bigs needed to get to .333 on the season last night in Phoenix. The Grizzlies shot 48 percent on the Suns’ floor while holding Phoenix to a cold 39 percent night. Brandon Clarke shot 83.3 percent, while Brooks and Jaren Jackson, Jr. both hit for 55.6 percent. Memphis also outrebounded Phoenix, 55-44.

NEXT UP
Bucks at Grizzlies – Friday
Spurs at Suns – Saturday

With the New Orleans Pelicans in town, Giannis Antetokuonmpo left the onus of getting the Milwaukee Bucks’ 16th consecutive win in the hands of his able teammates. Eric Bledsoe and Khris Middleton took the lead in Antetokuonmpo’s absence, with Ersan Ilyasova taking care of the paint. The win overshadowed a nice night by J.J. Redick and Jrue Holiday who both had a 72.7 percent shooting night. It’s the second longest win streak in Milwaukee’s franchise history. The Bucks won 20 straight back in the 1970-71 season. They also won the NBA Championship that season. Good omen?

NEXT UP
Pelicans at Sixers – Friday
Bucks at Grizzlies – Friday

It wasn’t a stellar performance nor a non-contestable dagger from Nemanja Bjelica this time, but the Sacramento Kings carved out another big win with some last minute heroics from Bogdan Bogdanovic this time, who hit the game winner with 13.4 seconds remaining. The opponent wasn’t the Dallas Mavericks or Houston Rockets, but the win was just as big. Going into the night, Oklahoma City had the seventh position in the Western Conference and Sacramento was on the outside looking in; now we have a logjam of teams at 11-13 and the Kings have taken OKC’s place, followed by Phoenix at eight and the Thunder now on the outside looking in.

NEXT UP
Knicks at Kings – Friday
Thunder at Nuggets – Saturday

Who would have thought that the bargain basement special of the NBA would be the most competitive game of the night? This game should have been as ugly and disgusting as San Francisco’s financial district has become, yet it was one of the night’s best. Interim coach Mike Miller gets his first win and is .333 as the Knicks coach in what may be the best part of the Knicks season thus far. Certainly, beating Dallas (and Kristaps Porzingis) twice may be the highlight of New York’s tumultuous year, but they actually resembled a competitive team last night. They shot 47 percent on the road, outrebounded the wounded Warriors, 58-46, and overcame 18 turnovers to nail down the win.

NEXT UP
Knicks at Kings – Friday
Warriors at Jazz – Friday