The Rundown v121420 – Lakers Setting the Tone, Nets Do the Same in the East 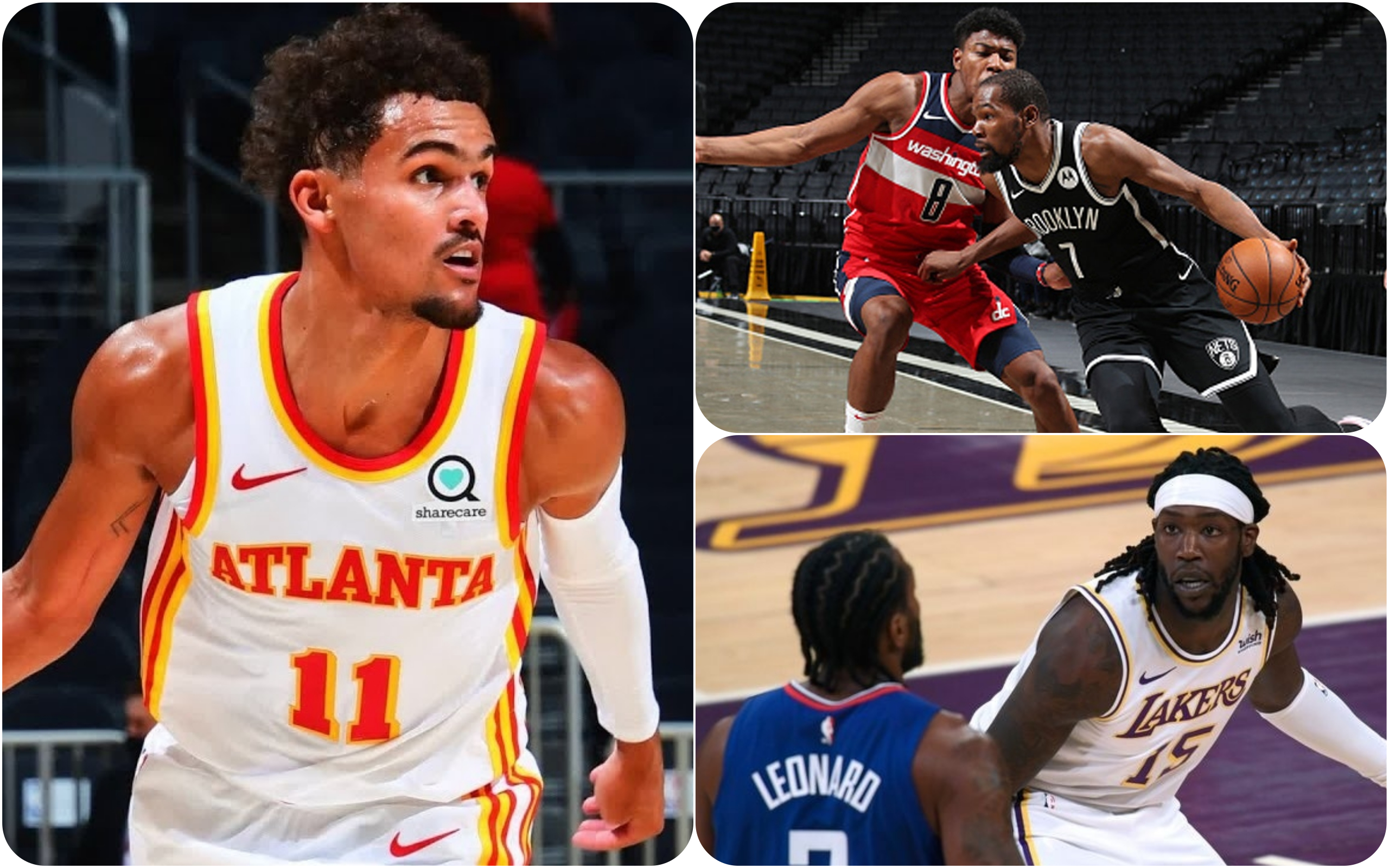 The Atlanta Hawks looked better with Trae Young, Danilo Gallinari, and Bogdan Bogdanovic hitting their shots; but no one's looking better than the Lakers, though Kevin Durant and Kyrie Irving tried last night versus Washington.

While it looked like a rerun from pre-season’s Opening Night on Friday night, it honestly wasn’t as four of the five teams that lost on Friday turned things around last night – except for the Los Angeles Clippers, who only seemed to underwhelm with Montrezl Harrell in the locker room across the arena.

Last night’s Lakers box score was the same top three scorers as Friday night, and none of them were named LeBron James or Anthony Davis.

That being said, all eyes – including those of the pawns – were more than likely on the Washington Wizards-Brooklyn Nets game, to see how the Kevin Durant-Kyrie Irving tandem would finally play out.

Let’s just say a soccer playing point guard got his first win as head coach … and he talks to the media.

Yes, the Detroit Pistons got into the win column last night on the shoulders of Sekou Doumbouya, and then celebrated by cutting LiAngelo Ball, who got zero minutes of playing time through their first two preseason games. (Then why did you sign the guy?)

Derrick Rose and Blake Griffin came to life – sort of – to kick in a combined 21 points, eight rebounds, and 11 assists. And while none of the other 14 players that played scored above double digits, each scored enough for the Pistons to get their first win, thanks to a 31-20 first quarter burst that kept the New York Knicks at bay for the remainder of the game.

The Knicks got within 77-75 by the end of the third quarter, but a 24-16 fourth by Detroit sealed the victory. R.J. Barrett and Julius Randle once again set the tone for the Knicks, and Alec Burks seemed comfortable in his new home, with 15 and five on the night. But New York got little from anyone else, including starters Elfrid Payton (four points), Nerlens Noel (three points), and Obi Toppin was a rookie-like four and four. Mitchell Robinson had eight points off the bench, but Kevin Knox and Dennis Smith, Jr. have been virtual no-shows so far this pre-season. New head coach Tom Thibodeau has to get more out of these veterans if he wants to reverse fortunes for New York.

John Wall can’t do it all, though he mightily tried last night in Chicago. The Chicago Bulls, however, turned things around from Friday night and gave Billy Donovan his first win as head coach of the organization.

The Rockets are in turmoil, as the James Harden saga plays out for Houston general manager Rafael Stone. Though he hasn’t batted an eyelash on Harden’s stance, he seems to be more at a disadvantage than Sam Presti was when Harden pulled this nonsense in Oklahoma City. While that selfishness plays itself out, the Rockets came out Friday night and thrashed the Bulls, only to have it done to them last night, despite a nice night from Wall and DeMarcus Cousins.

The Rockets led 79-73 after three quarters, but then fizzled out to the tune of a 12 point fourth quarter, while the Bulls stampeded with 31 to overtake Houston and earn the win.

Zach LaVine led all scorers with 23 on the night, but Coby White chipped in 20 and rookie Patrick Williams showed why the Bulls took him with the fourth overall pick in the 2020 NBA Draft. At the time, I thought they needed Isaac Okoro, but after watching Williams two games, it certainly seems that – finally! – the Bulls organization has basketball decision-makers that know what the hell they are doing in Marc Eversley and President of Basketball Operations Arturas Karnisovas. This Bulls team is going to be a lot more fun to watch than in years past.

The Los Angeles Clippers never seem to learn. It’s almost as if they’re content being the redheaded stepbrother in L.A.

The box score from the Lakers – at least the top three – is the same as Friday night’s Lakers win … except the numbers are inflated last night. Better than Friday night’s. As if the Lakers learned what they could do to the Clippers on Friday night and then upped their game last night and did a lot more of what they wanted to do. It’s a good thing this isn’t prison rules basketball.

If nothing else, we now know Talen Horton-Tucker’s name and what he’s capable of. We already knew that about Montrezl Harrell, as did the Clippers who should rue the day they let him walk. And Kawhi Leonard and Patrick Beverley can troll Harrell all they want – but Harrell outscored and outrebounded BOTH of them last night, and tied them for assists. Oh yeah, he outscored Paul George, too.

The Clippers seem to have backslid since falling to the Denver Nuggets after a 3-1 lead in last season’s playoffs, and there doesn’t appear to be a sense of urgency to remedy anything, or even an anger to fuel a competitive fire. I guess if you’re making upwards of $35 million each this season, it’s okay to coast on 20 combined points and head to the beach for a party once the final horn blows.

What this team needs is to be pursuing James Harden, not lying back and watching him play for the Heat or the Sixers while the Clippers’ season is cut short by apathy.

Harry Giles got the best of his old team again last night, leading the Portland Trailblazers to … a loss?

Yep, without viable input from C.J. McCollum, Damian Lillard, and Carmelo Anthony, the Blazers aren’t as special as people want to believe. Many have them in the thick of the Western Conference hunt. But unless they start getting production from others that aren’t in their Big Three – as you can see the Lakers are doing – it will be on those three’s shoulders for the season, and that may not carry Portland all the way.

Sacramento seemed to learn from it’s mistakes on Friday night and put together an effort that saw eight Kings players score in double digits, ensuring that they wouldn’t lose two pre-season games in a row. Kyle Guy – which sounds like a superhero’s pseudonym – you might remember from Virginia’s Final Four run before COVID-19. He led the Kings last night with 14 points as did Kings staple Richaun Holmes, before he fouled out.

De’Aaron Fox had 13 points and Nemanja Bjelica added a dozen, while Sacramento got 11 points apiece from Chimezie Metu, Tyrese Haliburton (who also had six rebounds and seven assists), and Glenn Robinson, Jr. Frank Kaminsky rounded things out with 10 points and four rebounds. The Kings keep getting well-rounded efforts like this, and head coach Luke Walton may have a better second year with Sacramento.

After a .222 performance in their first pre-season game, it was nice to see Trae Young light things up from better than double that shooting percentage, and 50 percent from downtown as the Atlanta Hawks got a much needed win in front of their owners in the stands at an echoing State Farm Arena.

This game was so much fun for me to watch, despite having only two fans in the stands, because we finally got to see why the Hawks sunk their fiscal talons into guys like Bogdan Bogdanovic, Danilo Gallinari, and Clint Capela.

To watch Trae bring the ball down and have viable options on both wings that could drain the three was a coach’s dream to see executed. Gallinari shot 55.6 percent on the night and Bogdanovic matched Young at 46.7 percent. Capela finished with 12 and 12, but was fluid in the paint, swirling around the defender for a beautiful jump hook on one play that should be in a Kareem Abdul-Jabbar textbook somewhere.

Orlando leaned on Markelle Fultz and his game high-tying 21 points. Cole Anthony – a first round pick from my hometown of Portland, Oregon by way of the University of North Carolina – added 16, while Aaron Gordon jumped on the radar with 15 on the night. Nikola Vucevic had 14 points and 15 rebounds, while Evan Fournier finished up with 13 in the loss.

I’m sensing that guys like Kevin Durant and Kyrie Irving had a little something to do with that, though, and the fact that the Nets played the Washington Wizards without Russell Westbrook and Bradley Beal.

Be that as it may, it was nice to see Durant and Irving get out there and put their talents on display. It’s been about a year since Irving defected and put himself out of play for the Nets, and I can still remember how we all felt the pain when KD went down after trying to come back and help the Golden State Warriors against the Toronto Raptors.

So after a year of selling all different colorways of sneakers, it was a warm, fuzzy feeling to see him lace some up and get out there and hit for 15 on the night. Certainly not the numbers we’re accustomed seeing, nor what he’s accustomed to putting up, but that will come. It’s been nice to see the leg perform, whether playing football in the sand this summer, or tested and proven last night against his former Thunder coach.

For the Wizards, they had to lean on Rui Hachimura and with Westbrook and Beal sitting, they got a good look at what rookie Deni Avdija could bring to the table. Avdija was the subject of one of the best NBA memes this week, where it showed Westbrook asking the rookie, “what position do you play?” Avdija replies, “shooting guard.” Westbrook says, “Well Brad and I are taking all the shots, so you’d better go find something else to do.” He did last night, scoring 15 points on six for six shooting in his NBA debut. Not too shabby, kid.