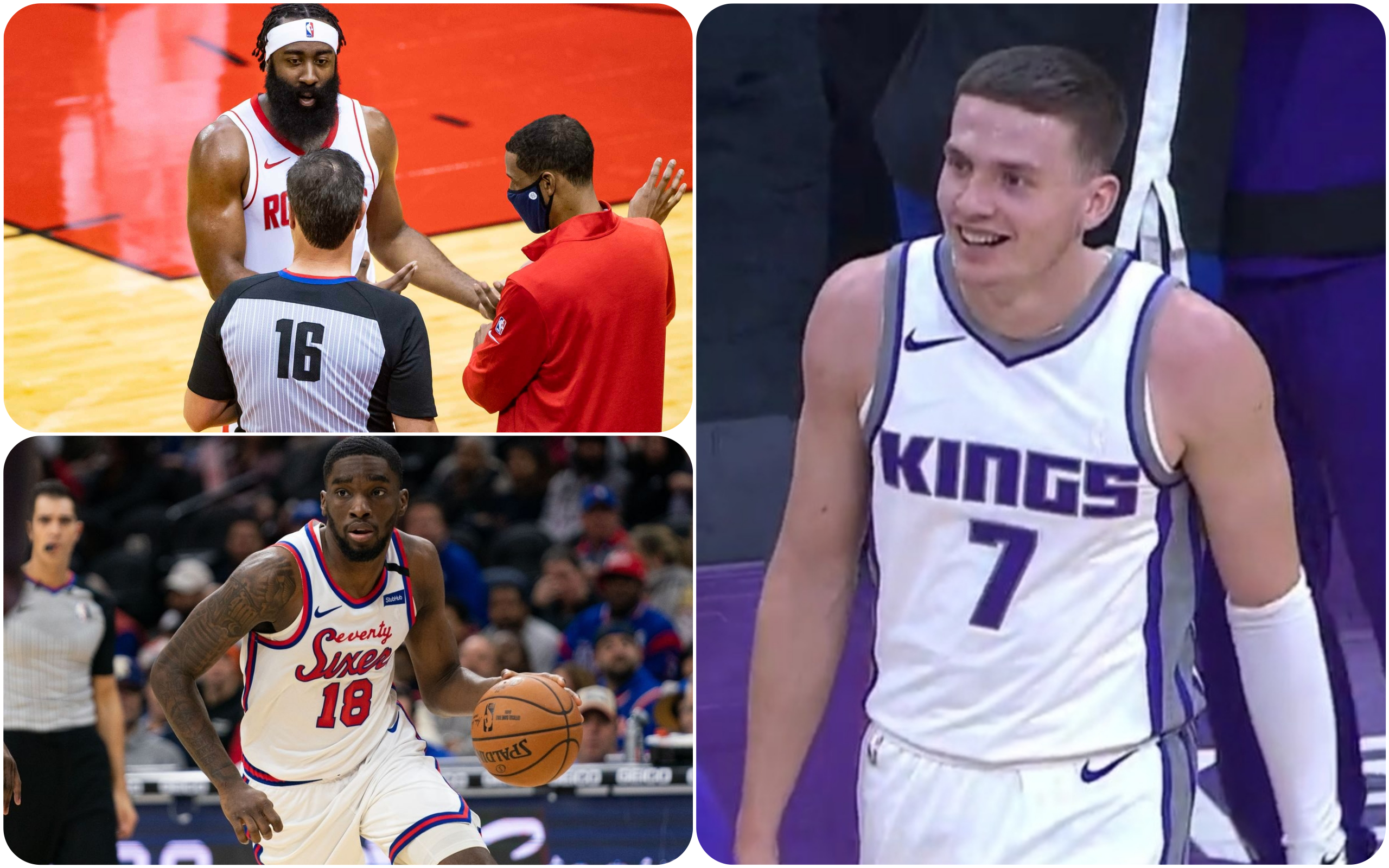 Sacramento's Kyle Guy is a kid you want to root for, as is Shake Milton, who led the Philadelphia 76ers to a win over Boston last night. James Harden returned to shoot .300 but still looked more alive than the San Antonio Spurs.

People itching for the return of Boston Celtics basketball had their dreams fractured last night, as their team got shook by a guy nicknamed ‘Shake.’

San Antonio is off to another lethargic and crippling start, much like they were a year ago, while the battle for bragging rights in Northern California went to the Sacramento Kings last night, despite vintage Steph Curry.

The Boston Celtics got shook last night by Malik Benjamin Milton – aka ‘Shake’ – something that last season would have gotten glares from Joel Embiid.

This year, new head coach Doc Rivers has said he liked what Milton brought to the table and was going to encourage him and utilize him more, which was music to Milton’s ears. “Shake’s been amazing,” Rivers told Sports Illustrated last week. “He’s faster than I thought. It’s funny, he had a big game against [the Clippers last season], but most of that was jump shooting. You know, when I was with the Clippers, he made a bunch of jump shots. I didn’t see his ability to get to the rack and make plays. He played with the first group today because we keep moving groups around, and he was unbelievable.”

Never more so than last night, when Milton led the 76ers to the win over Boston with 19 points on 57.1 percent shooting, including 50 percent from downtown. Embiid followed suit and knocked down 18 points, while #VFL Tobias Harris had a strong 16 and nine in the win. Ben Simmons finished with 10 points, two rebounds, six assists, and two steals.

The Sixers jumped out to a 10 points lead after one, with newcomer Jeff Teague getting his audition and scoring as many points as he’s scored in a while – actually the last time Teague scored 18 points was with the Atlanta Hawks, against these Boston Celtics earlier this year on February 3rd.

University of Oregon draft pick Payton Pritchard had a solid initial showing with 16 and four, while Jayson Tatum took a back seat with 10 and four. Every other Celtics only hit in single digit scoring, while new center Tristan Thompson, Daniel Thies, and Kemba Walker didn’t play in the game.

After two days of partying and five days of training camp, James Harden showed up to shoot 30 percent, proving Scottie Pippen right in his assessment that Harden is just a guy who shoots a lot of shots.

Meanwhile, John Wall was solid in his third straight game for the Houston Rockets, who flew orbits around the San Antonio Spurs, a team looking as wobbly and woeful as they started out last season.

Ben McLemore matched Wall’s 15 point effort, while Harden launched 10 shots in 21 minutes only to hit three to get a dozen on the board for his first points this season. This from a guy who can hit for 50 night after night and wants to improve his trade value – but can’t hit the waters of the Gulf with a rock some nights. Last night was one of those nights.

Eric Gordon and former Ohio State Buckeye Jae’Sean Tate both finished with 11 points in support roles, while 11 is how many rebounds DeMarcus Cousins had in his start role and 21 minutes of play.

San Antonio’s lethargy caught up with them again and drug them into the uncertainty of last season, where they could have set an NBA playoff record with a 23rd consecutive appearance. Instead, they fell short, much like they’ve done this pre-season. Again.

Lonnie Walker IV and Dejounte Murray combined for 30 points, as the former All Star caliber players on this team did a sleep walk through the game. LaMarcus Aldridge only had 12, Rudy Gay finished with 11, and DeMar DeRozan has yet to wake up this pre-season, keeping his trade value about the level of Harden’s.

That lack of effort allowed Houston to outclass the Spurs in the second and fourth quarters for the runaway win.

NEXT UP
San Antonio at Houston – Thursday, 8 p.m. EST

You hate it when Steph Curry plays his ass off and the Golden State Warriors lose such a close game. You know if Klay Thompson were alongside Curry, this game would have been a non-issue, pre-season or not.

However, it’s always nice to see the underdog win, the feel-good story, and the hero a squeaky clean kid from Indianapolis, Indiana by way of the University of Virginia named Kyle Guy.

Curry led all scorers with 29 points on 52.4 percent shooting (he shot better from the stands in warm ups, didn’t he?). But it was a 62-47 first half by the Sacramento Kings that doomed the Warriors, even though they made a valiant effort to come back in the second half, outscoring Sacramento, 66-52. It just wasn’t enough.

Guy got solid help from De’Aaron Fox and Buddy Hield, while former Portland Trailblazer center Hassan Whiteside came out last night with a dependable 83.3 percent effort off the bench, resulting in 11 points and nine rebounds.

Marquese Chriss stood tall for the Warriors with 17 and nine, while Golden State got a dozen each from Kelly Oubre, Jr. and Andrew Wiggins. Brad Wanamaker, over as a free agent from the Boston Celtics, added 10 points and five rebounds in a reserve role.

These two teams resume the Battle of the Bay tomorrow night in Sacramento, as the Kings look for bragging rights in Northern California, even if it is just pre-season. Baby steps, baby steps.

NEXT UP
Golden State at Sacramento – Thursday, 9 p.m. EST

The Rundown v121520 – Pelicans Don’t Look Like a Last Place Team, Milwaukee Does
The Rundown v121720 – Lakers May be Unstoppable, Phoenix Has Yet to Rise