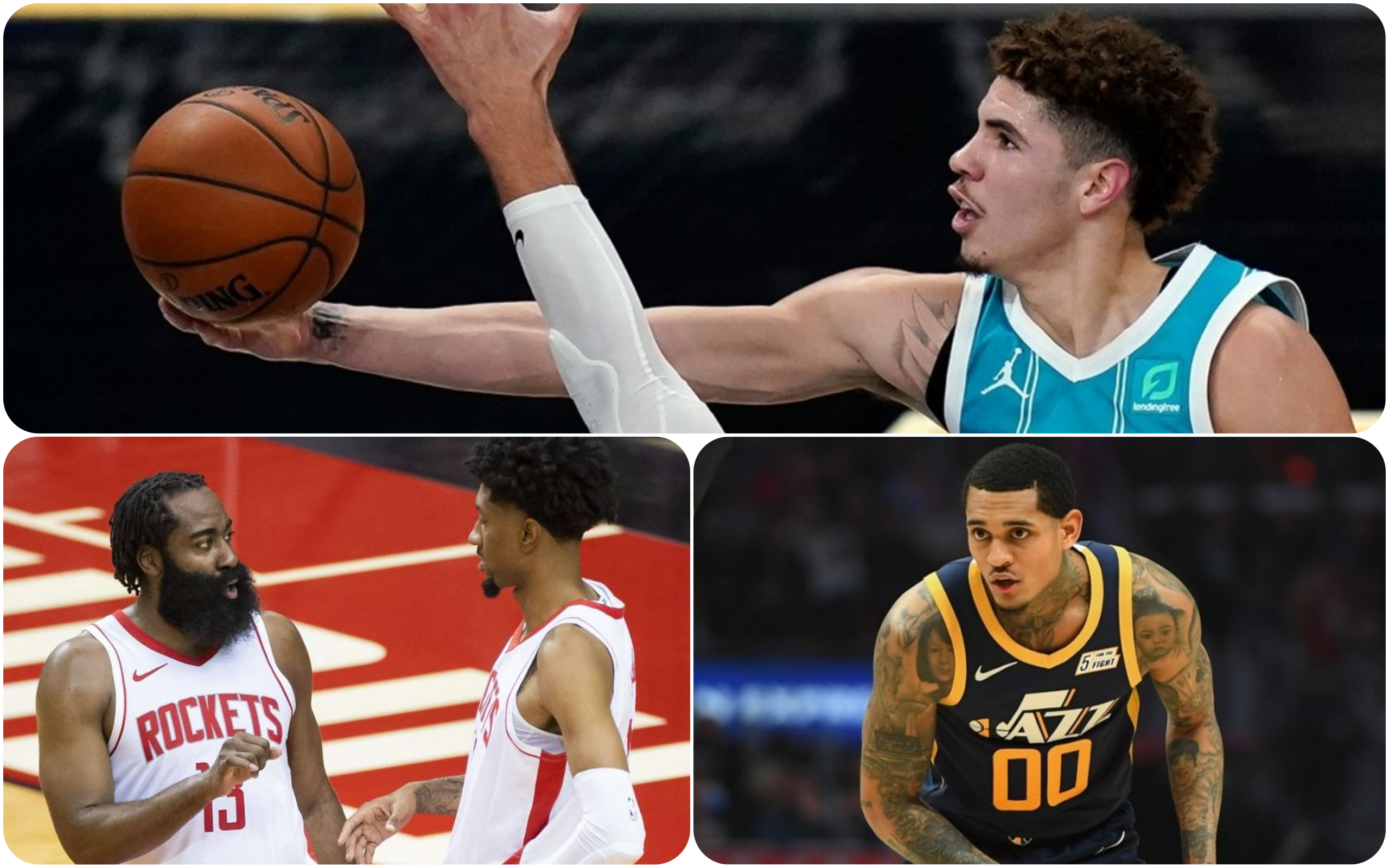 In last night's seven games, LaMelo Ball stretched himself to the next level, getting the Hornets their first win, Jordan Clarkson led Utah to yet another win, while Christian Wood and James Harden led Houston to victory.

Last night, it took Gordon Hayward stepping aside for LaMelo Ball to get untracked. Memphis looks like the real deal, while Golden State split the Bay Area series with a win in Sacramento.

Utah continues to be underrated, while the Los Angeles Clippers seem to be okay with being just okay. Minnesota wins in the first overtime game of the pre-season and sends Dallas down from the ranks of the undefeated, and James Harden is working his way back in for Houston.

The Charlotte Hornets finally got one in the win columna last night, and No. 3 draft pick LaMelo Ball finally got untracked, but it was Terry Rozier – who scored 14 of his 20 points in the first seven minutes – who set the pace for the Hornets in a 32-18 first quarter.

Ball finished with 18 points, as did Devonte’ Graham, and the Hornets committed only 11 turnovers to Orlando’s 19.

Gordon Hayward at least had the decency to wait until his second game with Charlotte before getting injured. You might recall, he was injured in his first game after signing with the Boston Celtics back in 2017.

Last night, Hayward was out after it was found he’d fractured his fifth metatarsal, which we all know informally as our pinky finger. Must have been from having tea with Ball during their first two getting-to-know-you pre-season games. Hayward is expected to be on a day-to-day consideration, obviously missing last night’s game, and if I’m James Borrego – since it’s his shooting hand – I just go ahead and wait until the regular season begins next Tuesday to re-evaluate the situation.

Miles Bridges added 17 points and four rebounds, while Cody Zeller got untracked with 10 and six. Ball shot seven of 17 from the field, including four of nine from downtown, and seems to be settling into his role, with another test coming against these same Magic on Saturday night.

Orlando was led by Nikola Vucevic’s 27 points and 12 rebounds, impressive on any other night than last night. Markelle Fultz finished with 14 points and six dimes, Dwayne Bacon sizzled with 13 and five, and Terrence Ross and Cole Anthony matched Bacon’s 13. Aaron Gordon finished with 11 and nine, while Khem Birch rounded out the double digit scoring with 10 points in the loss.

NEXT UP
Charlotte at Orlando – Saturday, 7 p.m. EST

In one of those old school, ho hum Eastern Conference games that only Mike Fratello would like, the Detroit Pistons went to Washington and pulled out a road win over the Wizards, thanks to 49 percent shooting to Washington’s 39 percent in their own crib.

Detroit ran out to a 58-45 first half, with Delon Wright popping hot for 10 points in the first half of the first quarter. Wright finished with 13 on the night, but set the tone in an otherwise lackluster affair for both teams.

Josh Jackson led all scorers with 17 points and seven rebounds, and Jerami Grant – coming over via free agency from Denver – finished with 15 points on a 62.5 percent shooting night. The often forgotten Derrick Rose humbly put in 10 points, six rebounds, and six assists, while Sekou Doumbouya also added 10 points in the win.

For Washington, who was without Russell Westbrook, Rui Hachimura, and Davis Bertans, it was a horrid night from the field, their 31 of 78 performance about as frigid as the air outside Capital One Arena. Bradley Beal played and notched 10 points on the night, as did Isaac Bonga, who also collected seven boards. Thomas Bryant, who had the cleanest stat line of the night (see above) and Robin Lopez both finished with 11 points, while Troy Brown led the Wizards with a humble 14 on 50 percent shooting.

NEXT UP
Detroit at Washington – Saturday, 7 p.m. EST

After battling competitively to a 68-66 halftime lead, the Memphis Grizzlies shot down the Atlanta Hawks with a 60-40 second half, highlighted by a 31-17 third quarter, to take the convincing 22 point win away from Atlanta.

Dillon Brooks led the way with 24 points on .667 shooting, while adding four rebounds and four assists. Jonas Valanciunas finished with 20 and 13 on the night, while Ja Morant had 18 points and dished an impressive 13 assists in what was a fairly flawless game for the Grizzlies. Memphis outdid the Hawks 33-25 in assists.

Kyle Anderson finished with 11 and seven, and Desmond Bane tallied 10 and six in the win. Justise Winslow and Jaren Jackson, Jr. still remain idle. The Grizzlies won the shooting battle, 47 percent to 38 percent.

De’Andre Hunter had a strong night for the Hawks, despite the outcome, leading the team with 22 points on .533 shooting. Trae Young chipped in 15 points and had six assists, while Clint Capela went 13 and nine on the evening. Cam Reddish finished with a dozen, and John Collins was 10 and seven.

Bogdan Bogdanovic and Danilo Gallinari combined for a pedestrian 17 points and 10 rebounds. Collectively the duo shot a paltry six of 19. Better to get that kind of night out of your system in the pre-season.

NEXT UP
Atlanta at Memphis – Saturday, 8 p.m. EST

It’s kind of nice to have James Harden back in the fold, when he shoots 57.1 percent from the field. It’s even nicer to have Eric Gordon earning that contract extension he signed last year. But what’s really nice is having the depth that Christian Wood brings to your roster, like he did last night, leading the Houston Rockets to a 22 point win over the listless San Antonio Spurs.

Houston outscored the Spurs 60-45 in the first half to walk away with this game. They shot 52 percent to San Antonio’s 40 percent and the Spurs 21 percent shooting from downtown dropped them to their third straight pre-season loss.

Wood led all scorers with 27 points and 10 rebounds. Gordon added 23 and Harden kicked in 20 to give the Rockets’ top three a 70 point tally, not to mention Houston’s 26-17 assist advantage. Houston was nearly flawless on the line last night as well, with only Bruno Caboclo (12 points) missing one of his two. John Wall and DeMarcus Cousins took a well-earned night off.

For the Spurs, it was time that DeMar DeRozan stepped up, but it was too little too late. He finished with a pre-season best 21 points, while No. 11 draft pick Devin Vassell of Florida State popped for 18 and six, and Dejounte Murray had a respectable 17 and 10.

Too bad San Antonio wasn’t playing the Phoenix Suns – this might have been a win.

The first overtime game of the 2020-21 pre-season and it’s the Minnesota Timberwolves who record it, knocking out previously undefeated Dallas in the process. Ryan Saunders lives another day.

Of course, as I said last week, when Karl-Anthony Towns is your third scoring option, you don’t stand much of a chance. When he takes over a game as he did last night, you have a fighting chance – even a good chance – to net a win.

That being said, for all his heroics, it was a 31-16 fourth quarter from the visiting Timberwolves that forced the overtime in American Airlines Center. Towns finished with 20 and seven on a night that was unofficially anointed for Minnesota’s big men – the timber in Timberwolves, if you will. Jarrett Culver also stood tall with 18 points – four rebounds, and two blocks. Minnesota also boasted a 55-45 rebounding edge.

The team also finished the evening with seven steals.

The Mavericks were without the still-sitting Kristaps Porzingis (see everything I have written about Dallas this season for that prediction), so they became a Luka Doncic-only team. Yes, Tim Hardaway, Jr. added 18 points and Maxi Kleber had 14, but when the focal point is on the 2020-21 Most Valuable Player and the rest of the team doesn’t put their best foot forward, it’s easy to shut a team down.

Dorian Finney-Smith and #VFL Josh Richardson finished with 13 points apiece in the loss.

The Battle of the Bay, Part Two … and ESPN thought enough of it to broadcast it, but the Sacramento Kings didn’t play as well as they did two nights ago when they bested the Golden State Warriors, 114-113. Last night, Steph Curry and the Dubs got a little payback.

With a 27-19 third quarter and a 46 percent to 23 percent three-point shooting advantage, the Warriors started rounding into form, despite the season loss of Klay Thompson. Curry hit for 29 again on a night where he didn’t shoot so well (.391), but took 23 shots. Kelly Oubre, Jr. continues to impress, finishing with 22 last night, while Andrew Wiggins – despite fouling out – had his best night of the pre-season with 19, four, three, and three blocked shots before taking his place on the bench.

Sacramento’s issue – as it has been since Rick Adelman left the coach’s seat – is they have no defined leader, which would be fine if they had cohesive teamwork. They have neither. When Harrison Barnes is outscoring a former No. 6 pick in Buddy Hield, you simply have a bunch of guys that can occasionally hit shots.

Barnes finished with 17 (45.5 percent), Hassan Whiteside had 12 and nine, and Hield was an ugly 23.1 percent for his 11 points. Oh, and De’Aaron Fox? The 17.6 percent he shot may have made Vivek Ranadive want to reconsider that rookie max extension, but he handed out 12 assists … to guys that shot 37 percent from the field.

For a fleeting moment after 12 minutes of play, the Los Angeles Clippers looked halfway decent, leading 29-28 after one. But then the Utah Jazz went uptempo and outscored L.A., 97-76, the rest of the way, as the victors outshot the Clippers from downtown and at the free throw line.

Jordan Clarkson led all scorers, and the Jazz for the second time this pre-season, scoring 20 points on 46.7 percent shooting. Bojan Bogdanovic is back, and not going anywhere (in trade as people have suggested), and matched Clarkson’s game high 20. Bogie shot 63.6 percent – I’d say he’s healed. Donovan Mitchell added 15 points and eight assists.

Mike Conley and Rudy Gobert added 12 points apiece. Gobert also had eight rebounds, and the Jazz only had nine turnovers to L.A.’s 16. The Jazz also had 15 more assists than the Clippers.

Paul George and Kawhi Leonard look better on paper than they do on the court together, unless they’re just coasting through pre-season while everyone else is playing their ass off. Luke Kennard put forth as good an effort as Leonard did – read into that what you will. Lou Williams was the only other Clipper in double digits with 12.

Marcus Morris, Patrick Patterson, and Serge Ibaka took a seat last night. They finish the pre-season winless as they gear up to face the undefeated Los Angeles Lakers. Again.

The team they lost to twice in the pre-season already.

The Rundown v121720 – Lakers May be Unstoppable, Phoenix Has Yet to Rise
The Rundown v121920 – The Sage Worked + Zion, KD and AD Throw Their Names into the MVP Conversation