The Rundown v122020 – Westbrook/Beal Dynamic May Be Better Than People Think, Grizzlies Go Down 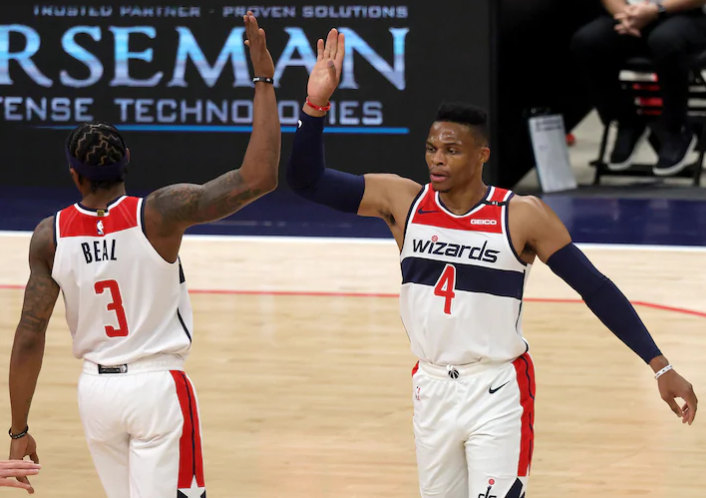 The Russell Westbrook - Bradley Beal - Deni Avdija combo is going to be better than people think, Danilo Gallinari and the Atlanta Hawks shot down the Memphis Grizzlies, and Charlotte has a long row to hoe.

Last night was a wrap for the 2020-21 NBA Pre-season, as three teams closed it out with some close games, and a couple of nice runs to salt away the wins.

The Memphis Grizzlies fell, the Wizards won one with Bradley Beal and Russell Westbrook finally getting the opportunity to play together, and the Charlotte Hornets are stung once again.

The Rundown with T-Money will take a couple days off as the regular season tips off Tuesday evening with a couple of great games on tap:

Last night, the Charlotte Hornets ended the 2020-21 pre-season the same way they plodded through the 2019-20 season, with Devonte’ Graham, Terry Rozier, and Cody Zeller leading the efforts.

Charlotte ended last season 23-42, which is the reason they got the No. 3 pick and went out and spent $120 million to get Gordon Hayward. Rumor has it they had Montrezl Harrell in their sights as well, but he turned down more money to stay in L.A. and chase a title with the Los Angeles Lakers.

Last night, the Orlando Magic’s core did what they do, and won another game on the shoulders of Aaron Gordon, Nikola Vucevic, Evan Fournier, and Terence Ross much as they’ve done the last 3-4 seasons.

The Magic built up enough of a lead – 94-78 after three – that they were able to withstand a furious Charlotte rally in the fourth quarter (39-26) and still hold on for the win. Seven players scored in double digits for Orlando, with Gordon leading the way with 20 points and nine rebounds.

No. 15 pick Cole Anthony chimed in with 19 points, Vucevic added 18 along with 12 rebounds, and Markelle Fultz, Fournier, and Ross all finished with 11 points apiece. Michael Carter-Williams rounded out the night with 10 points and eight rebounds.

Charlotte’s trio from last season totaled 62 points, while they got help from Miles Bridges’ 12 and 15, Malik Monk’s 11, and Caleb Martin’s 10 points. LaMelo Ball finished with four points, five rebounds, and four assists, along with unfounded, erratic comparisons to Jason Williams.

Let the boy alone – he’s not the next anyone. He’s the first LaMelo Ball.

Say what you want about the John Wall-Russell Westbrook trade being nothing more than a simple swap of peaked veterans, satisfying ruffled feathers and bruised egos for the sake of retaining both teams’ superstars.

Think what you will, but if you watched the chemistry between Bradley Beal and Westbrook playing together for the first time, you might have already forgotten about the bond and symmetry that Beal and Wall had.

Of course, it has been nearly two years since Wall and Beal played together for the Wizards, so that may be the reason you’ve forgotten, as well.

Call him Wizbrook, or Eastbrook, or whatever new nickname you bestow upon him, but Westbrook brings an energy to the Washington Wizards not seen in quite some time. It resulted in the Wizards staving off the Detroit Pistons last night and pulling out a win in their pre-season finale.

An impressive 63-49 first half output was the reason that the Wizards were able to just motor through the boys from the Motor City in the second half, as Detroit valiantly tried to mount a comeback through a 47-36 Sunday drive of a second half. But it wasn’t meant to be as Detroit has about as much buzz about it as a AA battery from Dollar Tree – it’s promising for a brief time, but then just lays there, useless.

The athletic guard himself scored eight points and had seven rebounds in his first 17 minutes as a Wizard, while Thomas Bryant, Bradley Beal, and Robin Lopez led the charge. Raul Neto added 10 points, and Israeli draft pick Deni Avdija added nine points and 10 rebounds, and showed some range with his three point shooting.

I’m excited for the first game against Wall and the Houston Rockets on January 26th.

Someone finally brought down the Memphis Grizzlies … and while I’m not celebrating that the Grizzlies lost, I am happy for the Atlanta Hawks, who are assimilating multiple talents and personalities into the team and finished the preseason 2-2.

The addition and evolving emergence of Danilo Gallinari and Bogdan Bogdanovic, the evolution and growth in De’Andre Hunter and Cam Reddish, and Trae Young’s continually impressive shooting and passing make the Hawks truly an exciting team to watch grow, flourish and soar.

Eve more impressive was how this group came together last night in Memphis after falling 29-17 in the first quarter. They would get up and try to fly again, only to a 100-87 run over the final three quarters of the game and steal a flawless pre-season record from the Grizzlies, who don’t look that shabby themselves.

In fact, in a side-by-side comparison in the pre-season, the Grizzlies are miles ahead of the Hawks, though they have walked the same dirt. But the Hawks may come along quicker than the Memphis Grizzlies when all is said and done if their shooters maintain the solid percentages they brought to the team.

Gallinari shot 50 percent en route to his 19 point night, while Reddish shot 44.4 percent from the field and .889 from the charity stripe. Solomon Hill shot .667, John Collins hit for .625, and Kevin Huerter was at .600 when all was said and done.

It was enough to outshine Dillon Brooks and Ja Morant, who combined for 32 points on the night, but shot just .462 and .333, respectively. De’Anthony Melton finished with 14 points on the best shooting of the team (.667), while Grayson Allen added 13, and Kyle Anderson and Brandon Clarke finished up with 10 points apiece and .375 combined shooting.