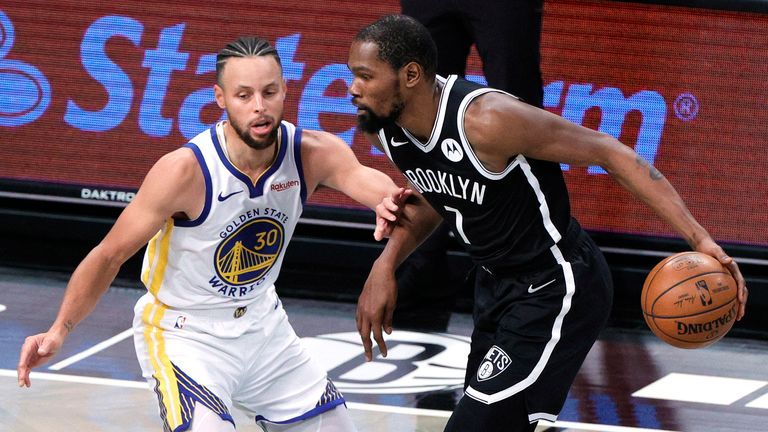 They may be friends off the court, but Kevin Durant showed no mercy in his Brooklyn Nets debut, where they crushed the Golden State Warriors; in L.A., Paul George and Kawhi Leonard began 2020-21 the same as last year, beating the Lakers. But it's how you finish that counts.

On an Opening Night which featured what NBA schedulers saw as an opportunity to market four NBA teams front and center, that had the promise of vying for an NBA Championship in 2021 – yet, only one team was a clear favorite, heads above the rest once all the dust settled.

And that team wasn’t from L.A.

It was from Brooklyn.

But for the teams that are from L.A., they squared off with the same results as the beginning of last season … and we all saw the weight of expectation crush the Los Angeles Clippers last season, which ended 72 days ago.

So was last night’s win over the Lakers a good thing? Or just an omen of the redundancy that is the Los Angeles Clippers?

For all the hype and anticipation of both the NBA season getting underway and folks getting a chance to see how the pairing of Kevin Durant and Kyrie Irving would succeed or fail, this thing was over after 12 minutes.

The Brooklyn Nets jumped out to a 40-25 lead after one behind Durant, who was in double figures in less than five minutes. They never looked back as they put together a 59-46 run over the next ensuing quarters, and coasted through the fourth to put a commanding 26 point win in the books, giving Nets fans something truly hopeful to cheer about as the 2020-21 NBA season is officially upon us.

As far as the Irving-Durant combination, things looked very promising (and healthy) for both players, as the duo combined for 48 points, nine rebounds, seven assists, while Durant added three steals and a block to the repertoire. Caris LeVert, who they call ‘Baby Durant,’ and who played very little in pre-season, hit for 20 points, nine rebounds, and five assists. Brooklyn had as big a lead as 38 at one point in the game.

The Hets looked very polished under a new coaching staff that includes Steve Nash as head coach, with a familiar Phoenix Suns throwback bench that includes Mike D’Antoni and Amar’e Stoudemire as assistants. Joe Harris chipped in 10 points and seven rebounds, while Spencer Dinwiddie finished with nine, five, and four in the first game he didn’t have to carry the Nets’ load in quite some time.

Lost in the loss was a solid first outing from rookie James Wiseman, who most thought was going to be worked into the starting gradually. Instead, he started in Game One, playing 24 minutes and going for 19 and six on the night. Andrew Wiggins struggled to get his 13 points, while Kelly Oubre, Jr.s first official game was a bit underwhelming at six points, seven rebounds, and .214 shooting.

You have to wonder how much Draymond Green would have impacted this game had he played. Green sat this one out with a sore right foot. But the Nets looked unstoppable, solidifying their fan base with dreams of dethroning the Los Angeles Lakers as NBA Champions.

So by the outcome of this game, it appears the pre-season really does mean nothing in the grand scheme of things. Well, it means that the Los Angeles Clippers took load management to a whole new level, by bowing to the Los Angeles Lakers twice and the Utah Jazz, only to suck us all in to the biggest catfishing incident on Opening Night of the 2020-21 season.

Watching the Lakers get their 2019-20 Championship rings may have also been the motivation behind the Clippers’ power duo of Paul George and Kawhi Leonard putting together an impressive 59 point, eight rebound, six assist night to drop the Lakers to 0-1 in the official start to the 2020-21 NBA season.

The Clippers – like the Brooklyn Nets – debuted with a 39 point first quarter to the Lakers’ meager 19 points. Unlike the Nets, they couldn’t hold the lead and were only taking a 56-54 lead into the locker rooms at the half, as the Lakers fought back in the second quarter with a 35-17 performance of their own.

That’s when George went to work, scoring 26 of his points in the second half, shooting 13 of 18 and hitting five three pointers. George and Leonard didn’t do all the work, though. Serge Ibaka debuted with 15 and six, Lou Williams and Ivica Zubac finished with 11 points apiece, and it was 10 and six for Patrick Beverley.

Anthony Davis looked like he expended all his energies in the Lakers’ final pre-season game, where he scored 35 points on Friday night to stave off the Phoenix Suns. Last night, he had just over half of that. LeBron James led the way with 22 points, while former Clipper Montrezl Harrell finished with 17 and 10, slightly better than his averages with the Clippers.

Kyle Kuzma added 15 points off the bench, and newcomer Dennis Schroder finished up with a quiet 14 points, 12 rebounds, and eight assists in his Lakers debut.

One wonders how much of a shot in the arm Talen Horton-Tucker could have given the Lakers had he gotten more than 10 minutes. After a damned impressive pre-season, where he totaled 82 points (20.5 ppg average) over four games split between the Suns and these Clippers, and shot over .500 at 29 of 53, Horton-Tucker may have had an impact that could have given the Lakers a fighting chance. He had just six points last night in limited playing time.

But, buyer beware, the Los Angeles Clippers began last season with a 112-102 win over the Lakers, beat the Lakers 111-106 on Christmas Day, and set themselves up for expectations that crushed them further on into the season, as they fell to the Lakers the next two times they played them and never got to face the Lakers in the playoffs, instead watching as the Lakers marched through the bubble to their 2020 NBA Championship.

Right now, Brooklyn has a clearer path to the NBA Finals than the Los Angeles Clippers do.

The Rundown v122020 – Westbrook/Beal Dynamic May Be Better Than People Think, Grizzlies Go Down
The Rundown v122420 – Harden Embarrasses the Rockets, Westbrook and Jokic notch Triple Doubles (in Losses)