The Rundown v122620 – Clippers Finally Make ‘Adjustments,’ Nets Have Them in Durant and Irving 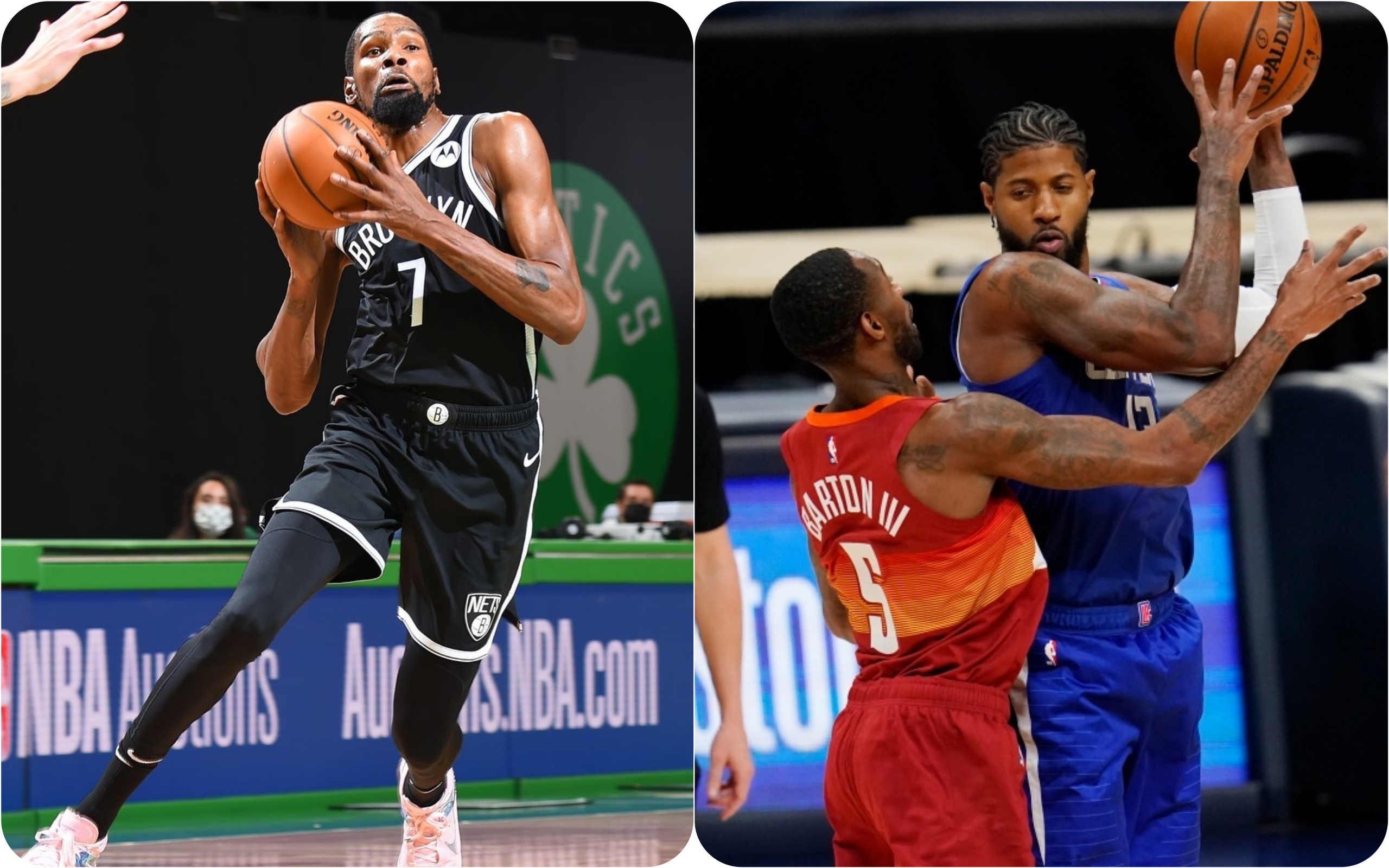 The Los Angeles Clippers beat the Denver Nuggets last night - a few months too late, but Paul George and Kawhi Leonard seem to have made those 'adjustments.' For Brooklyn, the only adjustment is getting used to being in first place.

On Christmas Day, both L.A. teams held serve and – like last season – the Los Angeles Clippers are in first place in the West. And, while Milwaukee won, it’s the Brooklyn Nets with the best record in the East.

The Heat scorched the Pelicans behind six first half three pointers from Duncan Robinson, while Milwaukee and the Lakers both ran up 138 point totals in their wins.

The five games yesterday gives way to a slate of 10 games today.

Zion Williamson is going to be a force to be reckoned with in this league, there’s no doubt about that. But when Duncan Robinson comes out firing – and hitting – six three pointers in the first half to give the Miami Heat a 66-53 halftime lead, it’s tough to come back from an assault like that.

It’s as if Robinson’s performance took the wind out of New Orleans’ sails, as the second half wasn’t any prettier. In fact, both teams evened out at 45-45, with the Pelicans registering a 19 point fourth quarter, so the Heat’s margin at the half carried them to the victory last night in Miami.

Robinson led Miami with 23 points, while Goran Dragic added 18 to go along with nine assists, and Bam Adebayo finished with 17 points and four rebounds. Avery Bradley ended up with 12 points on the night and Tyler Herro tapped out with 11 on the night. The Heat lost Jimmy Butler after just four points in 16 minutes. Butler left after the first half with right ankle stiffness after starting the day as questionable with a right ankle strain.

Williamson led all scorers with a 32 point night to go along with 14 rebounds for the Pelicans, who drop to 1-1. Brandon Ingram poured in 28 points, and Josh Hart added a dozen off the bench. The other three starters for New Orleans combined for a meager 17 points, as Eric Bledsoe and Lonzo Ball shot poorly – .200 and .250, respectively. Steven Adams hit for 100 percent but only had six points.

It’s almost deja vu from the start of last season when, decimated by injury, the Golden State Warriors began with Stephen Curry and some also-rans, only to lose Curry to a broken left hand for the season.

Last night, it’s still no Klay Thompson yet again this season, so it’s Curry and the also-rans with one year of experience, but still without a win as Curry’s shot isn’t falling and the Warriors aren’t in rhythm with one another, save the rookie: James Wiseman.

Wiseman was about the only bright spot for Golden State as they were stampeded by a herd of Milwaukee Bucks that ran out to a 66-56 lead at the half, then turned it up a notch or two higher and cranked out a 72-43 second half that left no doubt that Milwaukee still has some excellence in their lineup.

Khris Middleton nearly doubled Curry’s shooting percentage, as he shot 66.7 percent en route to a game high 31 points to lead the dash, though I don’t recall seeing a red nose on Middleton. Giannis Antetokuonmpo came up with 15 and 13 on the night, Donte DiVencenzo added 13, while D.J. Augustin matched DiVincenzo’s 13.

Jrue Holiday finished with 12 points and six assists, while Bobby Portis ended up with 10 and 12 on the evening.

Wiseman, the rookie center from the University of Memphis, shot three of four from downtown and finished with 18 points and eight rebounds. The rest of the starting five shot a combined 29 percent from the field – Curry at .353 to net 19 points, Andrew Wiggins at .333 to get his 12, Eric Paschall hit for 37.5 and got seven points, and Kelly Oubre, Jr. had a horrible second game for Golden State, with three points on one of 10 shooting. Draymond Green did not play once again.

Brad Wanamaker and Jordan Poole both ended up with 11 points on the night in the loss.

Looks like there’s still some sage in effect at TD Garden.

The play of the Brooklyn Nets is making them look unbeatable in the Eastern Conference, despite the fact that it’s only been two games, and that they have played two teams without their key players.

But yesterday’s beating of the Boston Celtics had the look of a contender’s chances left lying bloodstained on the mat. I had to turn the channel to watch the Rocky movies marathon to see some competition – this game didn’t have much at all as the Nets put together a 72-41 second half to bury the Celtics.

Kyrie Irving led all scorers with a 37 point night on 61.9 percent shooting. Kevin Durant followed up with 29 points – 16 points in the Nets’ 35-23 third quarter run –  as the duo outscored Jaylen Brown and Jayson Tatum, 66-47, through the night.

Caris LeVert added 10 points, but Durant and Irving didn’t need much help beyond that as it were. Tatum and Brown could have used all the help they could get.

Boston’s support (or lack thereof) came from Marcus Smart’s 13 points. Tristan Thompson, thought by many to be the missing piece for the Celtics, finished with eight and eight. Brad Wanamaker – who left Boston for Golden State – finished with more points (11) than Thompson.

The Los Angeles Lakers made up for their Opening Night loss to the Los Angeles Clippers by manhandling the Dallas Mavericks on Christmas Night, with a 23 point win at the Staples Center.

And speaking of rebounding, that’s one of the keys to L.A.’s win last night, as the Lakers posted a 53-27 rebounding advantage to seal the win, with Marc Gasol leading the way with nine, Anthony Davis grabbing eight, and it was seven apiece for LeBron James, Montrezl Harrell, and Markieff Morris.

Luka Doncic did what he could to keep pace with the Lakers, scoring 27 points to lead the Mavericks, who are still without Kristaps Porzingis until at least next month. #VFL Josh Richardson hit for 17, as did Trey Burke, Dwight Powell finished with 11, and it was 10 points apiece for Dorian Finney-Smith and Tim Hardaway, Jr. … but it wasn’t enough to avoid the goose egg instead of giving it to the Lakers for Christmas.

For L.A., James became the second highest scorer on Christmas Day, a day – or at least a time period – when he usually tweaks his groin. (Yes, Ohio State is in the NCAA Football College Championship series once again, so it’s ‘Injury Watch’ for James once again).

Davis led all scorers with his 28 point effort, James and Harrell dropped 22 points apiece, while Dennis Schroder is giving the Lakers reasons to extend him by dropping 18 last night and looking like a smart addition after two games. Kyle Kuzma came off the bench for 13, and even though they scored 138 points, the Lakers are failing to take advantage of giving Talen Horton-Tucker more than six minutes of action.

When a major injury creeps up – and it will – they’ll need Hort-Tucker to be ready and 6-10 minutes a night isn’t going to cut it.

Kawhi Leonard took a little friendly fire from teammate Serge Ibaka, but it looks like he – and the Los Angeles Clippers – might be more than alright.

In echoes of last season, the Clippers went to 2-0 after last night’s win over the Denver Nuggets, a rematch of the Western Conference Semi-Finals in which the Clippers were up 3-1, only to fall victim to the second of Denver’s historic comebacks from being down 1-3 (they would not come back against the Lakers in the Conference Finals, however).

Leonard and Paul George both shot 57.1 percent last night in the Mile High City to notch 21 and 23 points, respectively. Serge Ibaka, whose elbow bloodied Leonard’s mouth (laceration) in the fourth quarter causing Leonard to leave the game and not return, added 15 points in a win that saw the Clippers run out to a 72-55 advantage after the first half on the Nuggets’ floor.

Nicolas Batum finally got in on the action, finishing with 13 and 10 on the night, while Ivica Zubac had 12 points off the bench. Patrick Beverley finished with nine, and Lou Williams and Luke Kennard had eight apiece.

The Nuggets were led by Nikola Jokic’s near triple double, at 24 points, nine rebounds, and 10 assists. Jamal Murray managed to stay in the game last night, tallying up 23 points, while Will Barton finished with 15, five, and three.

Monte Morris added 13 and Michael Porter, Jr. finished with only 10 points on 44.4 percent shooting. The Clippers shot 55 percent on a night when the Nuggets only mustered 45 percent in their own crib.

Seems that George and Leonard have been able to make the ‘adjustments’ that they failed to a few months ago in the bubble. Good enough for a 2-0 start. Let’s see if it lasts.

The Rundown v122420 – Harden Embarrasses the Rockets, Westbrook and Jokic notch Triple Doubles (in Losses)
The Rundown v122720 – Harden, McCollum Put on a Late Night Private Show … No, Not That Kind